The Yuccas of Cochise's Stronghold 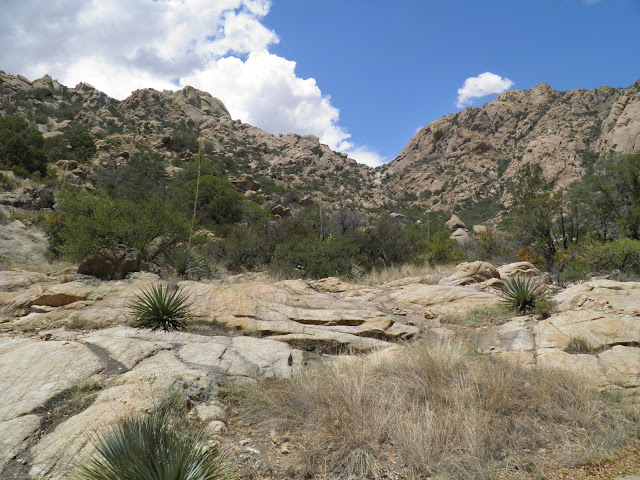 Maybe you recognize the landscape from the many Western movies that were filmed here. It is also a place were dramatic real western history took place:when in the middle of the nineteenth century the Chiricahua Apache leader Cochise used this part of the Dragoon Mountains as his inaccessible retreat during his decades-long fight against the US military. Today a dirt road that has been greatly improved since I first drove up there in 1991 ends at a picturesque campground among granite boulders and Silver-leaf Oaks.


This years devastating fires had forced the closure of most Arizona wilderness areas. On July 17, the entrance to the campground itself was still barricaded but a nice ranger let us park off the road anyway.
Despite some showers that had interrupted our Beetle Bash black lighting the night before it was still extremely dry, with even the drought tolerant Manzanita bushes looking yellow and about to die.
But a few Acacias were beginning to green and even to flower, and several species of Leaf Beetles were getting the message: The monsoon is coming and life can only get better.

A dominant plant family at the stronghold are the Agavaceae. Molina Beargrass, Sotol, Agaves and Yuccas provided the Apaches with fibers for baskets, soap, starchy roots and stems and edible flowers and fruit. Agaves are succulent and build up resources for a spectacular, once-in-a-lifetime bloom over many years (hence the name century plants). Yuccas are not succulent, but protected against too much evaporation by the leathery surface of their leaves. Most have extremely long tap roots to reach water sources deep in the crevasses of the granite mountain side and bloom reliably every year.

The relationship of Yuccas and their only pollinator, the yucca moth (Tegeticula, Pronuba) is famous: The female moth collects pollen in a yucca flower, rolls it into a ball and stuffs it into the cup-shaped stigma of another yucca flower.While thus making sure the flower is pollinated, the moth also lays her eggs in the flower. The caterpillars will hatch and feed in the ripening fruit. They will destroy some, but not all of the many seeds each ovary produces. This is an example of obligate mutualism where none of the partners could procreate without the other. The moths are active at dusk, so we didn't find any during our visit.


The gorgeous, rich yucca flowers were attracting a number of other less specialized and less beneficial guests.

Giant Agave Bugs (Acanthocephala thomasi, a coreid true bug} were mating on the flowers. Nymphs of different ages were already around. It seemed that each group of nymphs was guarded by a parent.


All of them were using their sucking mouth parts to extract juices from the thick flower petals.

A big green Stink Bug was also reluctant to give up his perch at the food source.

The inside of another stand of creamy white flowers seemed strangely dark.


When I pushed the flowers apart, dozens of rust-brown blister beetles became visible. They seemed to be resting during the day, but frass patterns around them betrayed their nightly feasts on the yucca petals.

An aptly named Longhorn beetle was sitting on the long pointed leaves.Yuccivorus means 'Yucca eating' and that is about all that literature has to say about this flat-faced borer that occurs only in Arizona (Texas?).


Soldier flies of several species kept landing on the leaves, maybe just using their spikiness as  protection against predators. While all resembled wasps, the one one the right was an exceptionally good mimic of Paperwasps - only her twitching antennae gave her away

Predators also made use of the three radial architecture of the yucca plant: certain spiders built their three dimensional webs between the leaves, and a young mantis was hunting in the bird safe sanctuary.

Posted by Margarethe Brummermann at 8:03 AM