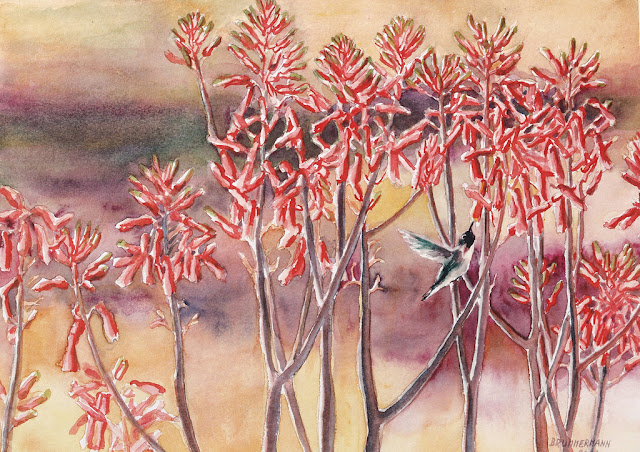 When we bought our desert property in August of 2002, there were areas around the house where nothing was growing but a spreading, raggedy little aloes. Our first instinct was to remove them and replace them with native plants. But we had 10 acres to take care of and didn't get around to it until winter. Flower stalks were pushing up by then. Coral red and delicate, but braving night freezes and drought. The hummingbirds loved them...so did we. 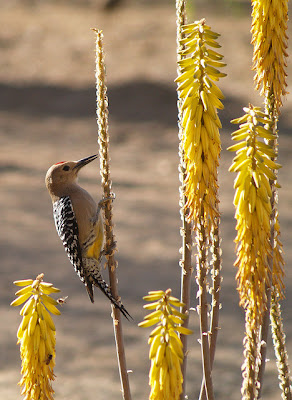 Our neighbor Thea brought us a trunk-full of plants from her garden, mostly cactus clippings and agave pups, but also a different species of aloes. These were taller, not spreading, and in March, they produced long lasting yellow flower stands. The Gila Woodpeckers delicately extracted nectar ... and we were getting hooked on aloes. 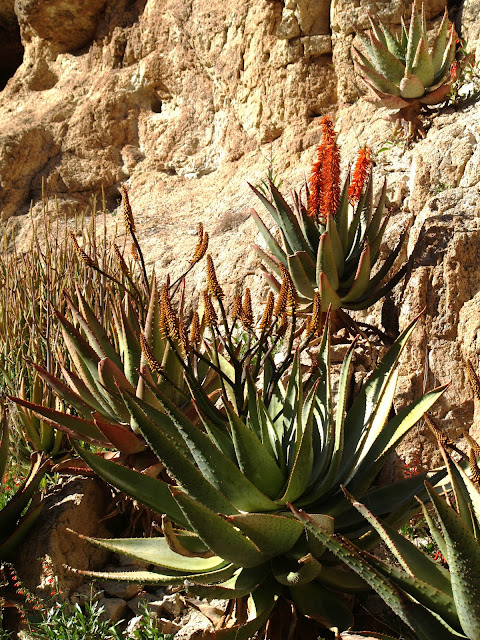 At the Boyce Thompson Arboretum and at Tohonochul Park we discovered larger species like Aloe ferox. The friendly owner of Bach's nursery gave me a free six-pack of rather overgrown, root-bound Aloes that would become some kind of tree-aloe if they survived. Two got eaten by bunnies, one was too far gone when I got them, one froze during another cold winter, but two did get so big that Randy started calling them Audrey. Right now, they are about 5.5 feet high, including the flower spike.

The botanical name is Aloe marlothii, or Flat Flowered Aloe. According to an online source  they are hardy to 20 degrees F. This winter severely  tested that, but they both survived several nights of 18 degrees. While most of the fleshy leafs lost their tips to frost burn, the rapidly growing flower spike never even seemed to slow down.


The flowers open slowly, starting at the bottom, and for the next two weeks, there will be new ones every day. Traveling Bullock's Orioles can use the refreshment on their trip north.


They have to fight the just returning  Hooded Orioles for it, and these usually win. Here's a link to  our resident male enjoying his treat.

Aloes are natives of Africa. They may look similar and are adapted to similar arid, hot, sandy habitats as our local agaves,  but the two genera are only very distantly related. Aloes bloom every year and not just once in a lifetime like their American counterparts which makes them great for a desert garden with little color in early spring. (but we do have great penstemons also)

Since birds and insects don't seem to discriminate against the transplants, we enjoy seeing them blooming in our yard when little else does. But we keep them confined to the 'gardeny' part of our land close to the house. We collected some seeds from each blooming cycle. The seedlings are now 3 (right) and 2 years old and still in pots on the window sill. 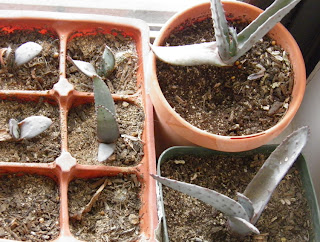 On the outlying parts of out property, we preserve and plant strictly native vegetation, even avoiding Mexican and South American succulents and cacti. As a result, we got through the cold spell of the last winter with minimal losses and it is great to see how everything is getting ready to bloom now.
All we need is MORE RAIN!!
Posted by Margarethe Brummermann at 6:27 PM