While photographing dozens of  interesting bee species on the Brittle bushes around our patio, I found a beetle that I hadn't seen before on a cholla branch. You can see it smaller than the areoles of the cactus, less than 4 mm long. Its compact round shape, tiny clubbed antennae and the dense, attractively patterned scale covering identified it as a member of the Genus Anthrenus in the family Dermestidae. Typical is also the ability to withdraw all appendices into a tight pill shape. These beetles are also called Skin or Carpet beetles. They could be named Collection bugs as well. While the adults can be found on flowers feeding on pollen, the larvae feed on all kinds of organic material like wool, stored food, hides, and insects in collections.


Checking the family page for Dermestidae on BugGuide.net and Andreas Herrmann's excellent online resource for dermestid species I quickly got to the species A. sophonisba.  Surprisingly, the attached author name Beal 1998 indicates that the species was only described 13 years ago. I have no access to distribution data other than Bugguide and some mentioning of the species when I google it. All point to western locations, mostly in California. It's amazing how many insect species are still being discovered and/or described every year in the Western United States. 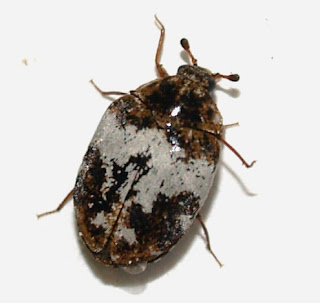 Those pretty scales are fragile. By the time I'm done with my photos the beetle sadly shows some  wear. But I did get one good shot for my digital collection of Arizona beetles that will hopefully one day mature into a field guide. 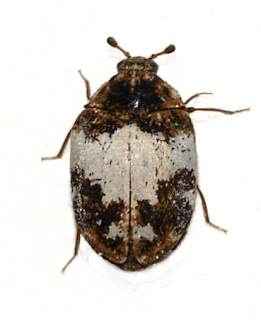 I wonder whether I should digitally straighten that right middle leg or leave it like this - after all, my beetles are alive when I take my photos.
However, this one is going into the freezer now. Being too small to be pinned, it will be glued to a point of archival paper. An insect pin will keep this point and the labels with the collection data together to make this carpet beetle a useful part of a research collection, unlike his feared, destructive brethren.

Posted by Margarethe Brummermann at 6:42 PM