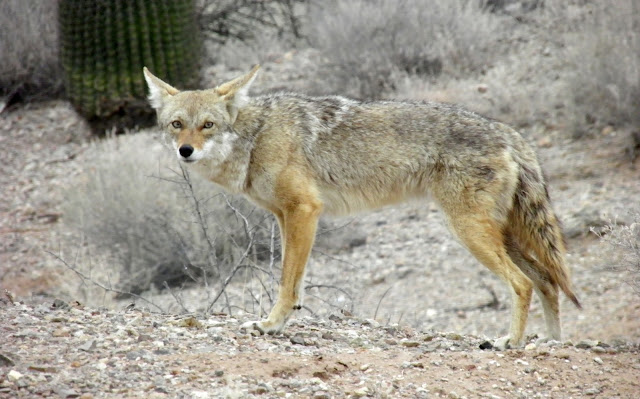 One my way home from the University I often leave the busy freeway (I10) to travel west on Silverbell, a road that winds its way between the Santa Cruz River on the north side and the Tucson Mountains on the south side. It's less romantic than it sounds, because the river smell bad from the release of treated waste water and the banks are pockmarked by gravel mining and cruising off-road vehicles.   But there is wildlife: Hawks are nesting precariously on power poles,  ducks and herons fly overhead, and today I first slowed down for a roadrunner, then for a coyote trying to cross the road. 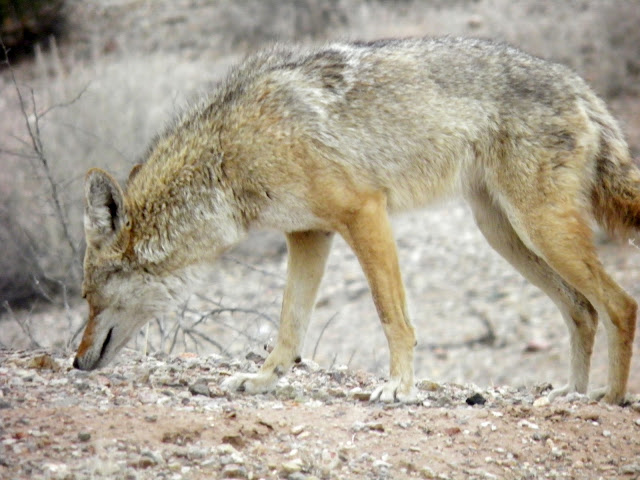 In fact, because there were many cars behind me, I first blocked her progress by pulling up next to her. She wasn't too happy - it shows in her expression. I never turned off the engine and kept the windows closed.  She relaxed and waited around until I got my camera out of its bag and focused, and all the other cars had passed. Then she took up her original direction again, crossing the road, leaping elegantly over a substantial fence on the other side, and off towards the Tucson Mountains. Good luck!
Our Coyotes here in the desert are small, only about 35 pounds. The packs usually consist of a pair and a couple of last years pups. The desert just doesn't feed larger groups. From coyote scat one can tell what they eat: everything. There is bunny fur, bones of little rodents, though most will be dissolved by strong stomach acids. Pieces of mesquite or other fabaceae beans that are in season. Bird seeds, berries, lots of pinacate beetle shells. They do grab cats and small dogs if they can.
Our dogs are at fifty to sixty pounds much larger than coyotes. We used to have an invisible electric fence to keep our dogs  in about one acre of our back yard, the rest was left to a group of  resident coyotes, usually three of them.  During full moon nights, the male appeared outside the dog run to challenge Cody, our male dog, who just loved to play along. For hours I'd listen to: Yep-yep-yep-wheoouuuuh! Wow, Wow, Wowowowow!!!! Yep-yep-yep-wheoouuuuh, Wow, Wow, Wowowowow!!!! endlessly repeated. The females, a husky and a wolf-dog, and on the other side probably the coyote bitch, stood back admiringly. Sleeping? impossible. The contestants had found the best acoustics closest to the house. So I got up, with a flash light (for the snakes) and joined Cody. Mr. Coyote was only 15 feet away, clearly visible in the moonlight, but safely on the other side of the invisible fence that controlled the dog. He ignored my requests to leave and sing elsewhere. He scoffed at me clapping my hands. So I crossed the line of the invisible fence. He put back his ears, kept staring. Unbelieving. Made grunting noises. Another step. His tail went down. Tucked between his legs. Unhurriedly, he backed of. Melted into the surroundings. Was gone. For now. I was my dogs' hero! For now - forever. They are dogs!
When my dogs meet coyotes on walks (outside the dogs' direct territory) I often see them pointedly looking the other way when they have to pass each other. A strange dog would cause a happy chase or a fight, but the coyotes seem to enjoy a truce.
Posted by Margarethe Brummermann at 7:42 PM