Springtime Blister Beetles of the Southwest

After a year of severe drought, record heat, and parched desert landscapes, this year's spring rains brought us glorious carpets of annual flowers all over the Southwest. Yet, according to my records beginning in 2007, there still seem to be much fewer insects than usually in March and April. The reason may lay in the prolonged drought or just the cool night temperatures that we are currently enjoying... 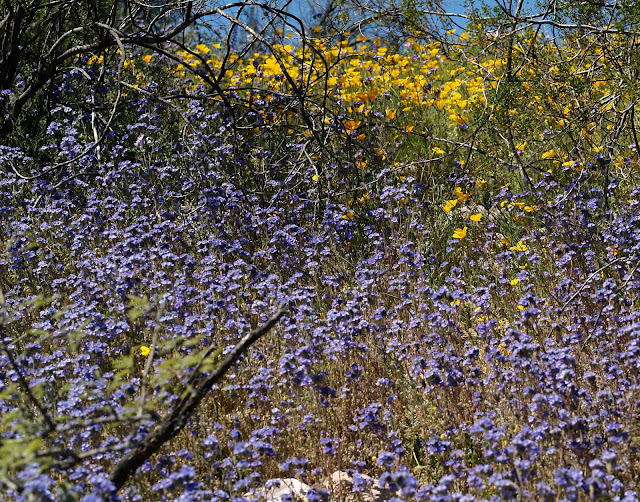 However, the large stands of Lupines, Desert Chicory, and Brittle Bush have attracted a multitude of colorful beetles of a family that is superbly adapted to our desert environments: The Blister Beetles or Meloids.

Blister Beetles occur all over the world except in New Zealand and Antarctica. Of the 335 US species the majority lives in the Southwest. We also have the most bizzare and colorful ones right here in our deserts.

This month, you'll see them everywhere where there are plenty of fresh flower petals to eat.


At Saguaro National Park West you may come across 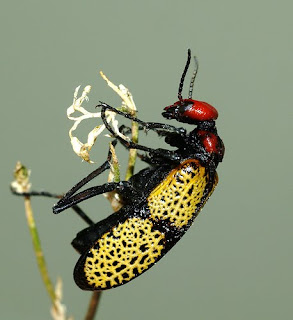 aggregations of Iron Cross Beetles Tegrodera aloga (right) wandering along the path in the morning or hanging suspended from weed stalks during the hotter part of the day. 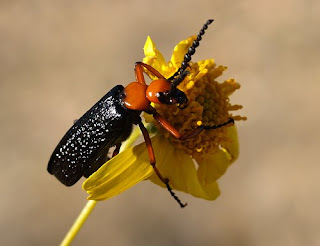 Meloid Poison
The bright and striking color combinations of many Meloid species are probably a warning to predators: Blister Beetles are poisonous. Their blood and soft tissues contain Cantharidin. The chemical is produced by the male, transferred to the female during mating, and can also be found in the body of the larva. Blister beetles respond to disturbances by reflex bleeding from knee-joints and other body parts.

Skin contact with this fluid can raise painful blisters.
Grazing animals like horses can suffer digestive and urinary tract damage, inner hemorrhages and even death if they are unlucky enough to ingest too many beetles with their feed. Epicauta vittata and Epicauta occidentalis reportedly cause the most damage. They are not among our spring species but occur during the summer months. The lethal dose for an adult horse is more than 150 beetles. Horse owners here in Arizona are keeping a weary eye on grasshopper population explosions because they are usually closely followed by Epicauta  mass occurrences. (Epicauta larvae feast on grasshopper eggs).  Current alfalfa harvesting techniques involving waltzing the plants before baling sometimes trap hundreds of the beetles in hay bales. Alfalfa harvesting methods that avoid crushing the beetles and letting them instead escape before the hay is baled are available and are currently researched at the University of Colorado.


In folk medicine of many cultures extracts from Blister Beetles have been used for their presumed potency as an aphrodisiac and are still in use a remedy against warts. 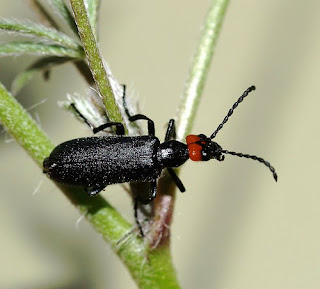 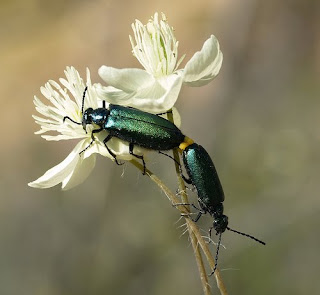 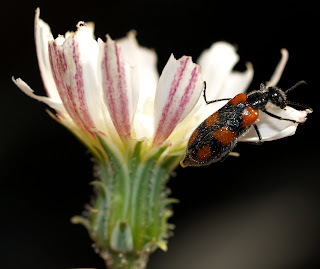 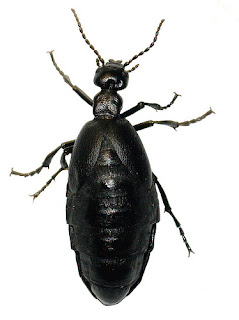 The big flight-less Oil Beetles Meloe barbarus hide in shady spots on a cow pastures of Picture Rocks. They hide so well actually, that the female I found is only the 5th AZ state record since the species was described.
read more about the amzing life cycle here: http://thesmallermajority.com/2012/10/08/life-saving-beetles/ 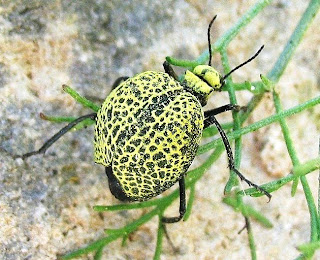 Inflated Beetles Cysteodemus armatus carry insulating air pockets under their wings. They are at home mainly in the Mojave and the Colorado Desert but they have been found as far east as the White Tank Mountains close to Phoenix. (I went looking for them last weekend - no luck - so this photo is by Phillip Ruttenbur, copyright 2005) 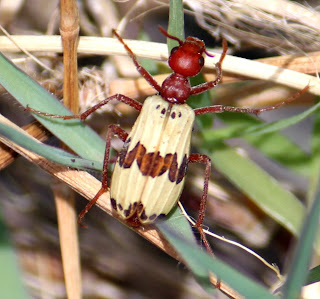 Phillip Kline (copyright 2010) found this beautiful Pleuropasta mirabilis in Arivaipa Canyon in Pinal County and sent me the picture for identification. He graciously allowed me to add it to this blog. 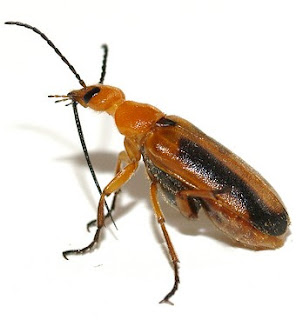 Dull orange beetles of the genus Nemognatha love the thick pink heads of New Mexico Thistles. Their elongated maxillae form a sucking tube that allows them to compete with bees for the nectar. On the flower heads they also find mates and lay their eggs.


Life Cycle
While the adults are vegetarians, Meloid larvae are predatory or parasitoid. The females of several Meloid genera position their eggs on flowers. Highly mobile, long-legged larvae emerge and hitch a ride on a visiting bee to get to its nest. From the BugGuide: 'In at least one Meloe species, the larvae climb to the top of a grass or weed stalk as a group, clump together in the shape of a female solitary ground bee, exude a scent that is the same as, or closely resembles, the pheromones of the female bee, and wait for a male ground bee to come along. When he does, he tries to mate with the clump of larvae, whereupon they individually clamp onto his hairs. He then flies away, finds and mates with one or several real female bees, and the larvae transfer to the female(s) and with them to the bee's nest.' There the larvae change into short-legged grubs that consume the bee off-spring as well as the pollen and nectar provisions. The winter diapause is spent in form of legless coarctate larvae which in early spring change again into short-legged but mouthless creatures only to prepare the pupal chambers. There they pupate and the adult beetles hatch ready for the next spring flower season to start the cycle over. This highly complex cycle is called a hypermetamorphosis. 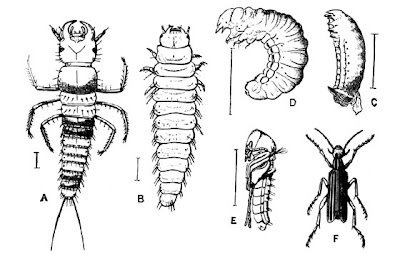 The best is yet to come
Here in Arizona, the monsoon rains will trigger another burst of fresh vegetation in summer, and with it many new species of Meloids will emerge, mostly in the genera Epicauta and Pyrota. 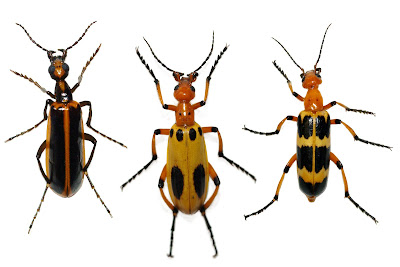 Three species of the genus Pyrota that we'll find again in Arizona from July to October.