I had to drive to Hereford Arizona to discuss the color settings for the printing of tiles of my watercolors. So of course I took the opportunity to check how spring is progressing in the Huachucas. Clearly, it's very dry. Besides oaks, not much is blooming except close to paved roads where run-off nourishes at least a few prickly poppies and New Mexico Thistles.

Pat Sullivan's garden in Ramsay Canyon always offers something special, because he keeps planting all kinds of native blooming plants and some that are not quite native but just irresistible to bugs.  Of course he also waters them regularly. 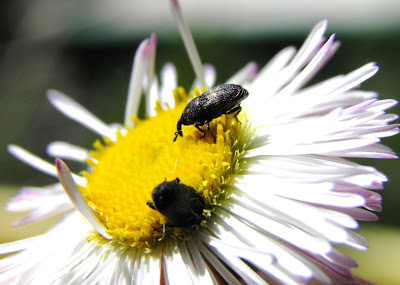 On little flee bane flowers, we found baradine weevils that maybe Charlie O'Brian can identify ... there were so many of those that the yellow disk of some flowers was black with them. 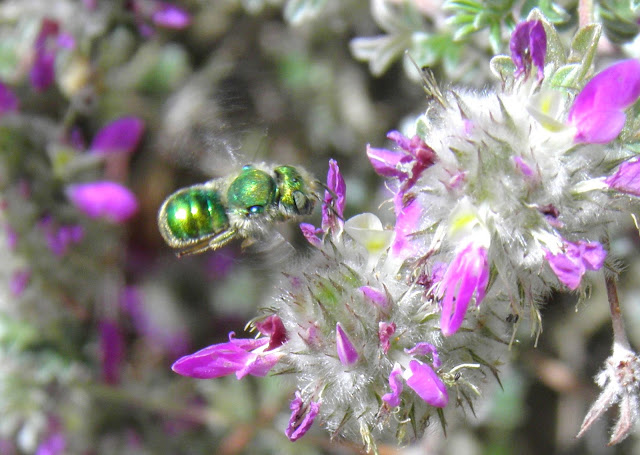 Daleas were buzzing with green metallic bees that might be genus Osmia, but I'm waiting for confirmation. I'm proud of the accidental in-flight-shot! The captured specimen got contaminated with moth scales before it was photographed. Terrible stuff! I don't even collect any moths! 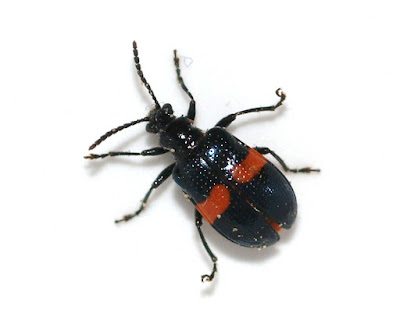 The nicest surprise was a little black, red banded Leaf Beetle, Lema balteata. Years ago Eric Eaton photographed  a mating pair in Catalina, also in a garden. Since then I've been searching for these elusive guys that look deceptively similar to our common Lema trabeata. On Kitt Peak, I thought I saw one on white blooming solanaceae, but it immediately disappeared.  I went back several times, and then the plants fell victim to gardening crews tending to the observatory. But maybe what I saw was just L. trabeata after all. The beetles in Pat's garden, 2 that I found and 3 in his collection, seem to prefer a sunflower with very narrow leaves (need to ask for the sp). They weren't close to any solanaceae at all.

I drove up Carr Canyon and found it dryer than Ramsay. Very dusty along the road, so even the fresh oak leaves yielded nothing. At Carr House, I managed to get away from the road and things looked up.

Three species of oaks were leafing out. Most hosted nearly no insects that I could find, but the ones that did offered many different species.


It seems to me that oaks, even of the same species, may contain very different levels of their main defense,  tannic acid. So some trees are just much more vulnerable than others and I have learned to look for those.

There were several different Leaf Beetle species and a Brachys,  a leaf mining Buprestid. So not all Metallic Wood-boring Beetles are real borers . I think I'll use the European term "Jewel Beetle' instead 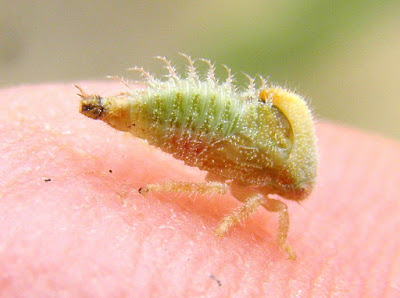 The nymphs of membracid Treehoppers, probably Cyrtolobus sp., would have been very well  camouflaged among the leaf buds of the oaks, but were given away by the dark shapes of ants that were hanging all over them.

There were at least 2 species of ants in attendance, Honey-pot Ants and Acrobat Ants. In one case they seemed to assist in the molting of a nymph like a pair of concerned midwives.

So much productivity had of course attracted a number of predators, from still in-pupa Lady Bugs, to strangely elongate Robber Flies,   Leptogastrinae,  to jumping spiders and Little dark beetles, all of them in pairs, and shaped like melyridae.
.

Posted by Margarethe Brummermann at 2:42 PM