This blog is another collage of my posts to our Facebook group SW US Insects and Arachnids. Robyn Waayer chose the theme for this week. I was surprised how many very divers contributions I was able to pull out of my files. even leaving Robber Flies, Bee Flies and Syrphids out because they were represented well enough in other posts.

Hill-topping Cuterebra arizonae, Rodent Botfly
9-19-9 pima canyon, Catalinas, Pima Co, AZ
Jeff Boetner det.
'Females typically deposit eggs in the burrows and "runs" of rodent or rabbit hosts. A warm body passing by the eggs causes them to hatch almost instantly and the larvae glom onto the host. The larvae are subcutaneous (under the skin) parasites of the host. Their presence is easily detected as a tumor-like bulge, often in the throat or neck or flanks of the host. The larvae breathe by everting the anal spiracles out a hole (so they are oriented head-down inside the host). They feed on the flesh of the host, but only rarely does the host die as a result.' In some populations 80% of all rodents are parasitized. The drone of these big flies is louder than most insects' flying-sounds

Mydas Flies are large, often wasp mimics with prominent, clubbed antennae. They move more slowly than many other flies. Larvae in decaying wood, soil, may be predatory

Neorhynchocephalus sackenii,
Nemestrinidae (Tangle-veined Flies)
Doug Yanega det.
in Copper Canyon south of the Huachucas, Cochise Co, AZ, Aug 2014
I was In Copper Canyon last August with Arthur V. Evans searching for beetles for his next beetle book, but these flies distracted with their constant loud buzz. Their larvae are parasites of grasshoppers, but some spp. also use scarab beetles as hosts. Supposedly rare in NA, but certainly very common then and there.

Bob Barber's contribution from July 28, 2009 Otero County, NM, shows a Robber Fly with prey. Most Asiliids seem to grab any prey of the right size that comes into range. But this one is specialized on the most painful stinger around: the Red Harvester Ant (Pogonomyrmex).

Thecophora sp. Conopidae (Thick-headed Flies) Martin Hauser det.
Picture Rocks
4-12-2011
Female Conopids ambush bees or wasps. They attack their targets in mid-air, often tumble to the the ground with it, and drive an egg between the bee’s abdominal segments of the victim. The larva that hatches from the egg then feeds as an internal parasite of the host, eventually killing it in about ten to twelve days. The larva then pupates inside the hollow exoskeleton of its host. Eric had a blog about them: http://bugeric.blogspot.com/…/wasp-wednesday-not-wasp-ii.ht… 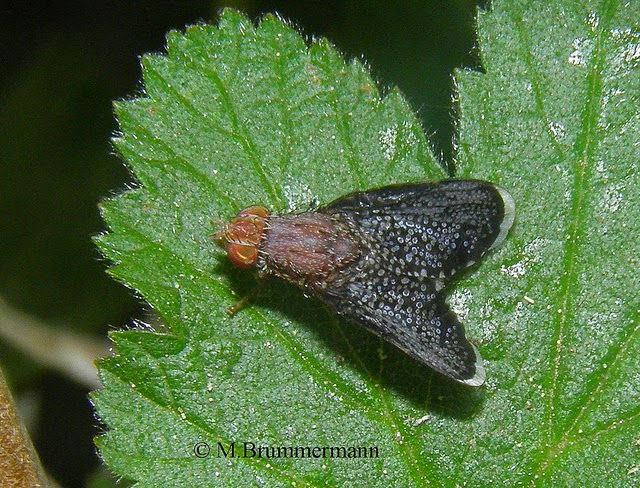 We tend to think of flies as those house flies that are a nuisance and can be a health threat even when they just land on our food. In this blog I've tried to show some of the extreme variety in looks and behavior that really makes flies (Diptera) one of the more interesting orders of insects.
They are certainly among the most important ones to human economy. They transfer diseases, but they also sanitize the environment. They are important pollinators for many generalist plants. As parasites, they control other insect groups that compete with humans for food. Having a short generation sequence and few, nice big chromosomes, Drosophila Fruit Flies were among the most important models in genetic research. With big accessible eyes and large ganglia in their brains, Sarcophaga is used in electrophysiology research and teaching. The list goes on ...
Posted by Margarethe Brummermann at 6:07 PM