Together with Robyn Waayers and Eric Eaton, I am administering a Facebook group about local (SW US and NW Mexico) insects. As winter is slowing the stream of submissions down, I suggested weekly themes which will hopefully more posts of interesting older images.
Of course I contribute too, and I tend to write enough of a background story that a friend called those posts juicy 'mini-blogletts'.
In December I am also very busy with my art business, so I have no time to write a cohesive blog post. So here  are the minis!

You can see the beak of the assassin - through it, the venom and the digestive juices are injected into the prey and the liquefied innards of the wasp are sucked up. External digestion is common in arthropods. Their internal digestive organ is a relatively simple tube.
The flies are drawn to any kind of exposed body fluids of other insects. They are comensales - co-eaters

I was surprised to learn that some of the harmless looking stink bugs are also predators. The have no raptorial arms or velcro feet like most Assassin Bugs, they just spear their prey with their elongate mouth parts.
Sycamore Canyon Pajarita Mts, Santa Cruz County, Arizona...
September 5, 2012

A bug not eating anything in the picture, but an obligatory predator, even if he is a Stink Bug (Pentatomidae)
Many pentatomid species with very acute points at their 'shoulders' (pronotum) are predators.


Calosoma sp. overpowering and then eating a dynastine scarab Oxygrilius ruginosus. Ground beetles in the genus Calosoma are often called Caterpillar Hunters, but they prey on anything of the right size and also scavenge. I think they got their common name in Europe (same genus, different species) where they are rare, but their populations can suddenly explode following a wave of gypsy moth caterpillars.
If you see one, don't touch. Their smell i...s much worse than that of the unrelated pinacate beetle (Eleodes sp.) that is actually called 'Stink Beetle' 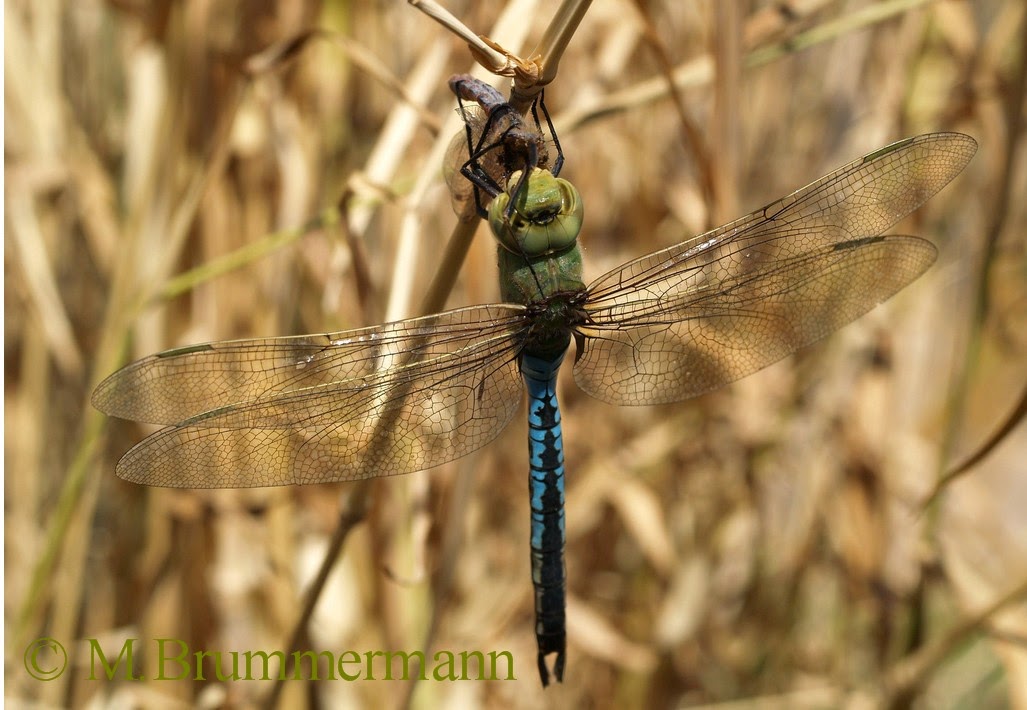 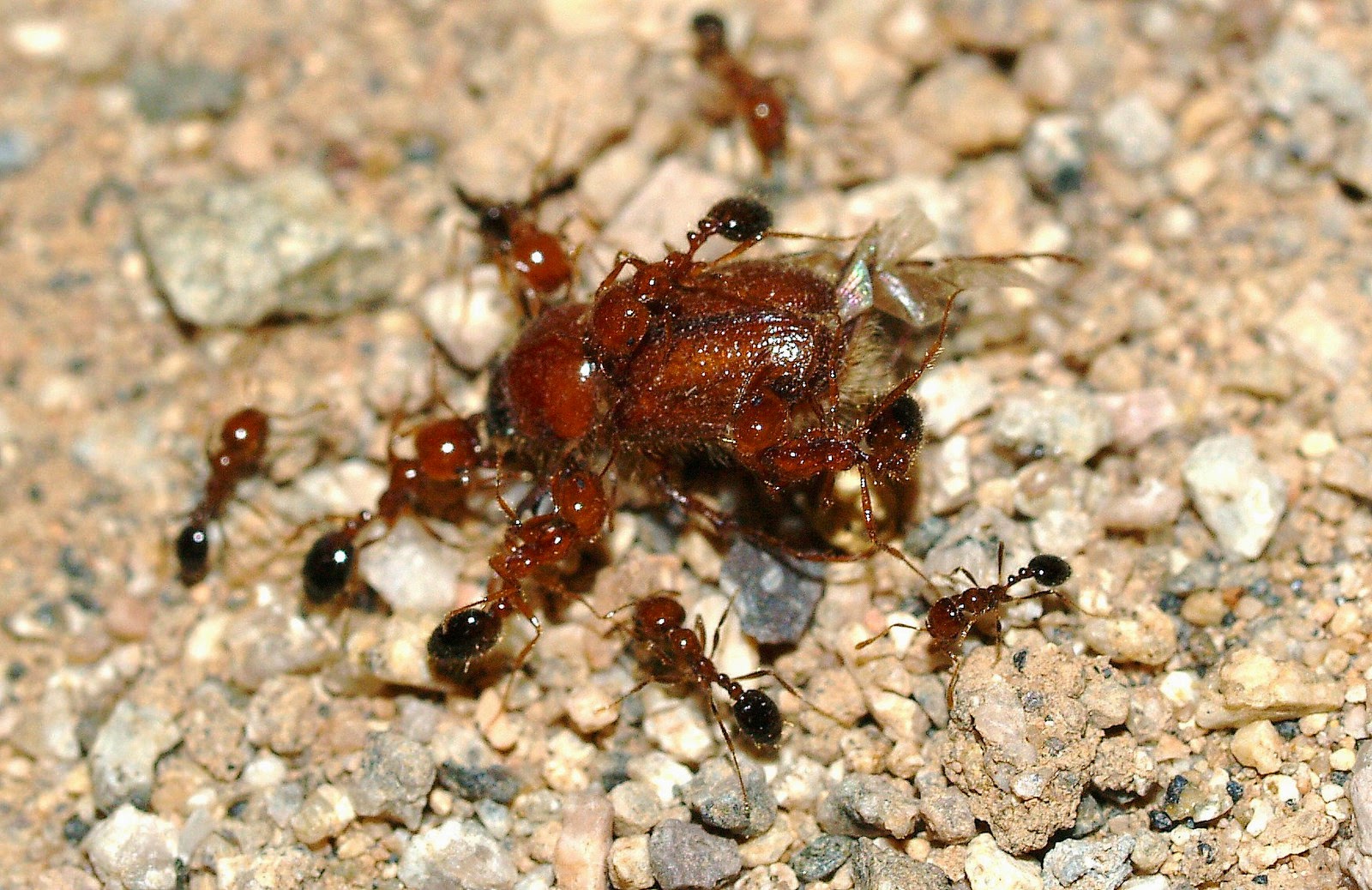 Our local little fire ants, Solenopsis xyloni feeding on Acoma mixta (scarab beetle)
Our little fire ants are indigenous, not an invasive species, and are everywhere on the desert floor. The are predatory as in the photo, but also collect seeds and will invade a kitchen if sweets are out in the open.
The beetle fell off a wall under a porch light and seemed just clumsy, not injured. But the multitude of ants that was waiting under the light for just such an eve...nt (together with a gecko and several Sonoran Desert Toads). The ants just overwhelmed the beetle. Some ants can bite AND sting, but I don't know about these guys. When they get me, it's more a nuisance than painful, but always a concerted action of several.


A Stagmomantis limbata female caught a Queen butterfly and ate it without any ill effects. That seemed somewhat surprising because Monarchs and Queens, whose caterpillars feed on milkweed, are supposedly loaded with toxins, even as adults, and their aposematic (warn) colororation should tell predators to avoid them. Nothing without exceptions?
Tohono Chul Park, Tucson, October

Surprisingly, nobody has posted a Lady Beetle feeding on aphids yet. Adults and larvae of many species of LBs feed on those little morsels. I have noticed that that is actually not the rule. In many species the larvae or nymphs exploit one food source, and the adults eat a different diet. That makes sense, because that way they do not compete with each other. Also, the growing larvae need protein, but to the adults, whose role is to spread the genes and distribute the population, sugars that are used by flight muscles may be more important than proteins. I guess aphids are full of sugar water from their own diet, and of course also offer protein ....
Picture Rocks, Pima Co, AZ, April 2014


Soldier Beetle Chauliognathus profundus feeding on a smaller Chauliognathus sp.
Interestingly, according to literature, adults of our local spp. feed on pollen and nectar. This pregnant female definitely has other cravings. There may also be more to it than just protein hunger.
I have tried to feed Chauliognathus to hungry jumping spiders who refused them while tackling bees of the same size. If Chauliognathus has defensive chemicals, the female may be trying to ...augment her supply before laying eggs (Note: Cantharidine is such a chemical, but was named after these Soldier Beetles by mistake. It is instead found in Blister Beetles).

Plega is a genus of Mantispids or Mantisflies. They have raptorial arms but they are neither Mantis nor Fly, they are related to Antlions and belong to the order Neuroptera
The females have a long, flexible ovipositor - its visible as a banded tail between the wings. The larvae are generalist predators of insect larvae, like solitary bees, paper wasps, etc

Posted by Margarethe Brummermann at 2:43 PM