I smelled a  nearly sickly sweet fragrance and heard lots of bees buzzing. Not equipped with the  superior senses of an insect I had a hard time finding the source of the smell. No blooming citrus tree and way too early for the Queen of the Night. No visible flowers at all. So I followed a bee. It took me to a juicy green clump of desert mistletoe in an otherwise rather bare mesquite tree. Of course! The parasitic Desert Mistletoe Phoradendron californicum has to produce its tiny green flowers before the host tree leafs out and makes it invisible. 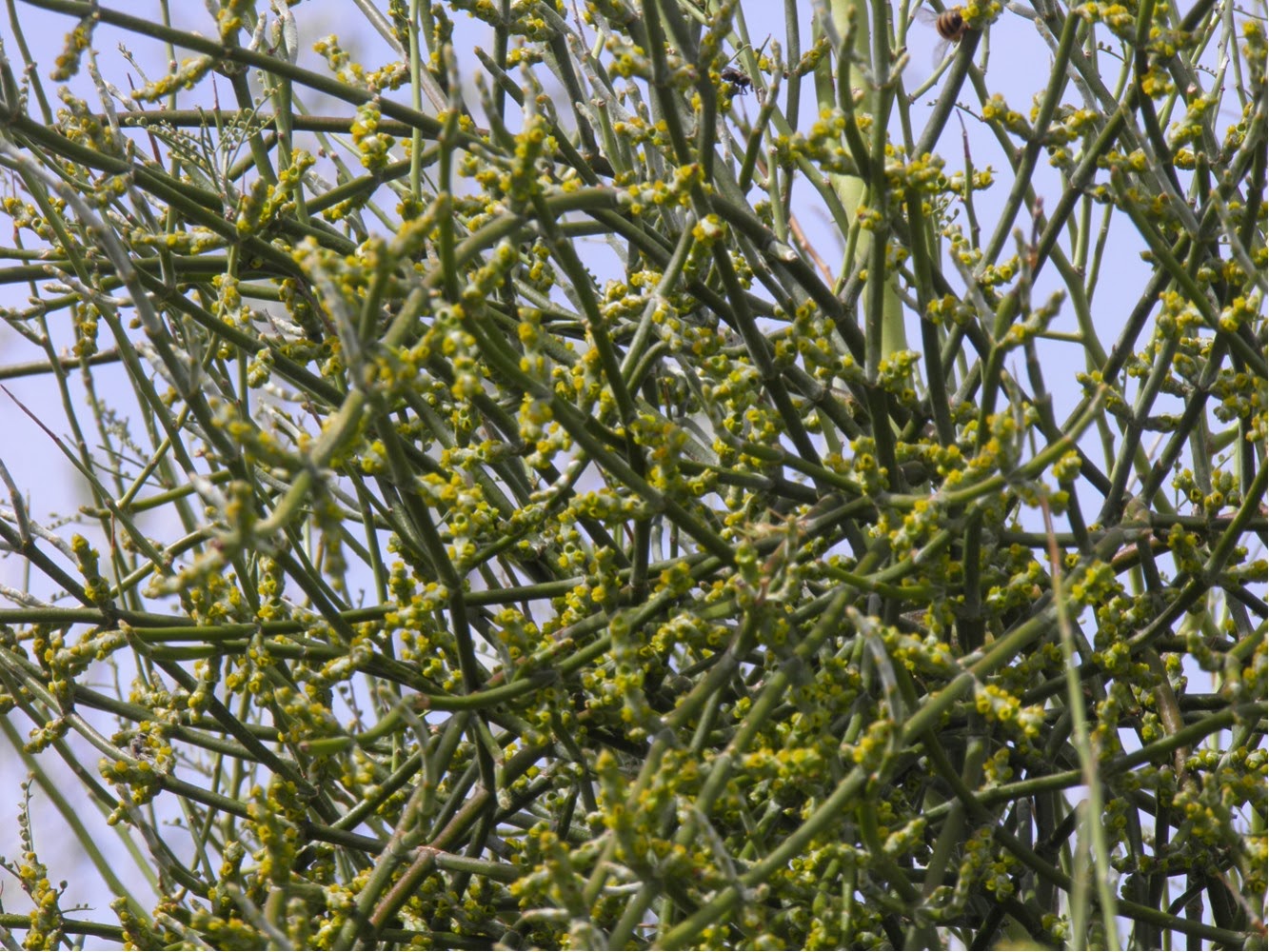 Desert Mistletoe flowers make up for their lack of visual appeal by sending out a very strong olfactory signal. The flowers were crawling with Africanized Honey Bees, several species of syrphids, and other flies. So obviously, both pollen and nectar were offered.

Other mistletoe clumps in the vicinity were already several step ahead in the propagation cycle: ripening berries were changing from a whitish green color into a reddish blush: the next participant in the drama is a bird, and birds need optical clues.

Sure enough, our main mistletoe-berry eaters, the Phainopeplas had come back to the desert a while ago and the shiny black males were claiming mistletoe-carrying trees as their territories. Phainopeplas belong to the Silky Flycatchers, but like their relatives, the waxwings, they rely on berries as a major part of their diet. During his territorial  display however, the singing male sits on an exposed branch, flying up periodically, flashing the white spots in his wings, and landing on his perch again. These motions are quite similar to the behavior of an insect-hunting flycatcher.

Claiming and defending a territory in the Sonoran Desert flatland is part of the double life that these birds lead. They raise an early brood here in spring, in a solitary nest close to big mistletoe bunches with ripening berries. When this food source is exhausted and the desert becomes hot and inhospitable, The phainopeplas move on to cooler mountainous and riparian habitats where they raise a second brood on a more mixed diet consisting of berries and insects, this time as peaceful colony breeders with several nests per tree.

But while in the desert, Phainopleplas are the main vector species for the parasitic desert mistletoe, meaning they are responsible for the distribution of the seeds to new host trees. Each mistletoe berry contains several large seeds. Like many seeds, they pass the digestive system of birds unharmed, maybe even stimulated to germinate.

A single Phainopepla eats over 1000 mistletoe berries per day. Since the bird usually perches in the upper branches of trees, it is likely that most of its droppings will land on lower branches. The seeds themselves are equipped with a layer of a very sticky glue (?) ensuring that they will stay in place on the bark. Not even our rare rains can dislodge them.

Very quickly each seeds sends out a root that searches for a crack in the bark to enter the trees tissue. The root tip divides into several 'suckers' that may produce chemicals to fool the cells of the tree to allow them to insert themselves without rejection. Many parasites use some kind of chemical mimicry. The suckers will eventually find the cambium of the tree and tap into the xylem, the water transport system. The tree will then provide the mistletoe with water and the essential trace elements that are carried with the water from the soil. Desert mistletoe resides nearly exclusively on leguminous trees (Palo Verde, Ironwood, Mesquite, Acacia) so it has also access to organically bound nitrates provided to the trees by their symbiotic root bacteria. Mistletoe leaves are reduced to scales but its branches are green and chlorophyll-loaded. So they are able to photosynthesize all the sugar the plant needs. Mistletoe does not tap into the trees sugar transport lines, the phloem. This type of parasitism is called hemi (half) parasitism or partial parasitism.

Parasites ideally do not kill their hosts. To do so would kill the parasite as well. But besides the water and nutrient drain, the multitude of drooping mistletoe branches that are up 1 meter long place a heavy burden on our small desert trees. After the frequent strong windstorms I often find branches with mistletoe that have been torn off the trees. Of course, Palo Verde trees are supposedly able to shed branches under adverse conditions to be able to survive. But to me those dying branches seem to indicate the impending death of the tree within the next couple of years. 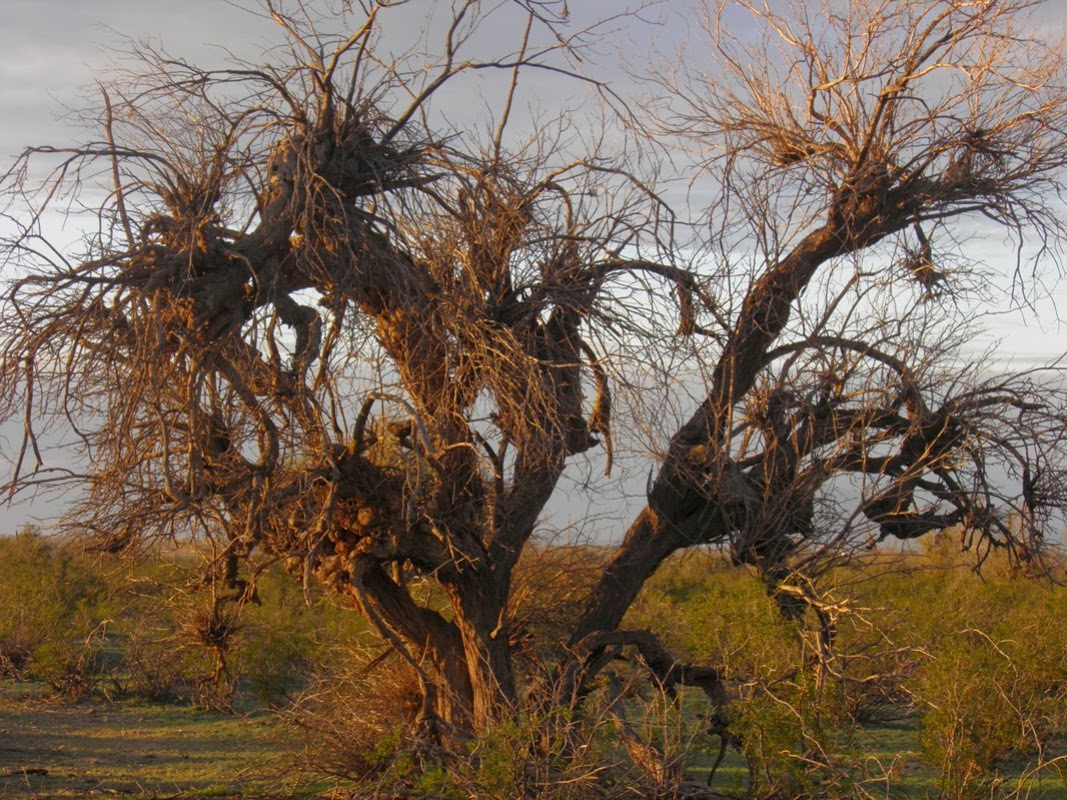 Most old Ironwood trees are crippled and contorted with huge tumor like growths. The tumors seem to originate around old mistletoe infestations. I cannot say whether the mistletoe itself causes the tree to produce these growths, or if the trees are trying to encapsulate the parasite, or if the parasite has caused a secondary infection by giving tumor inducing bacteria an entrance point. At any rate, the tumors usually seem to start as 'brooms' which appear when all the sleeping eyes of a branch begin to grow in an unregulated fashion. Mistletoe is usually mixed in with these trees branches.

Under the current conditions of continued drought many heavily mistletoe-infested trees will die. More than ever, water is the limiting factor in the desert, and water is what this partial parasite is sucking from the trees. But as usual, their is not only one reason for the decline. In our local case the quarry tailings in the background have contributed to a change in the watertable and the run-off from the mountains. Even though our desert trees are among the record holders in root length, old trees along washes that no longer run cannot adjust to those changes. 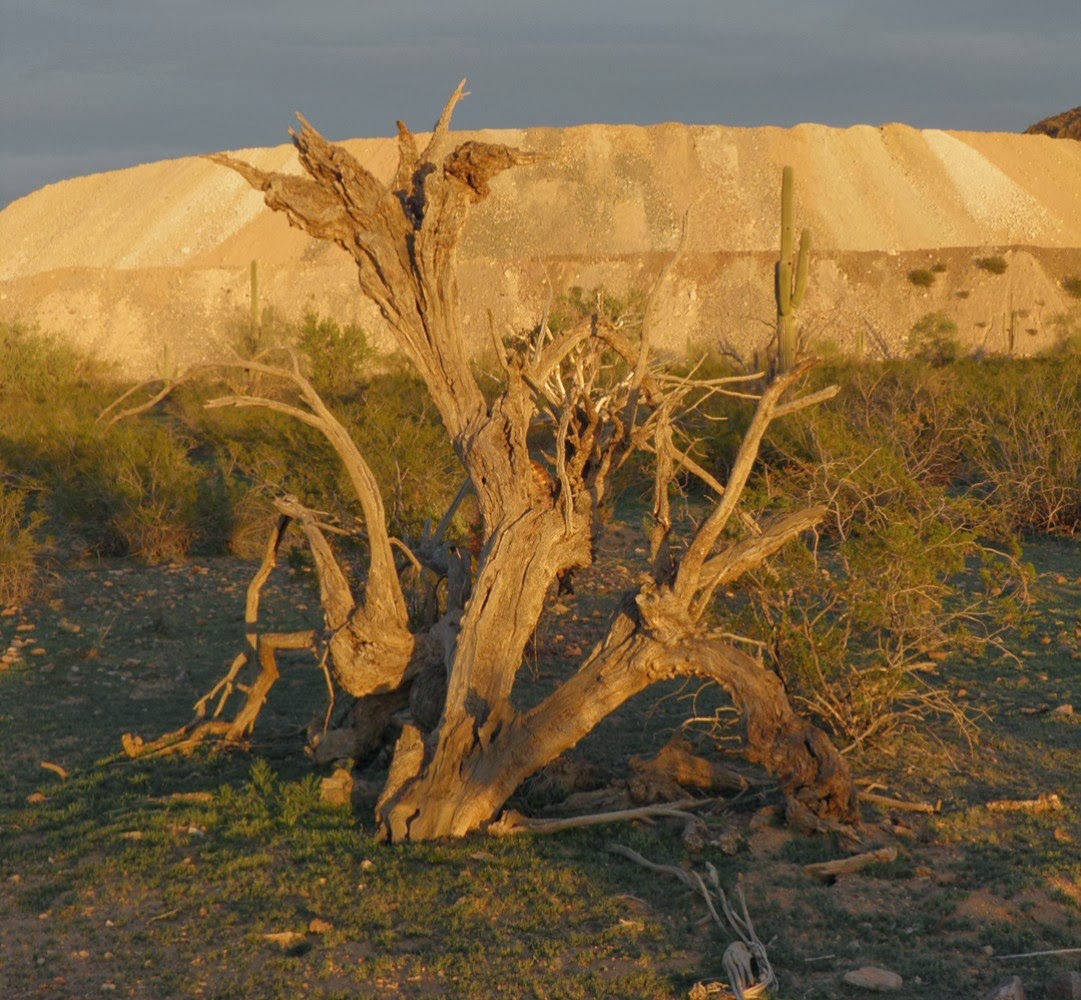 While I don't believe that mistletoe in natural areas should be managed (as many visitors to our parks request), on our own land where we enjoy a very limited number of old, big desert trees, we try to break the mistletoe bushes off the host plants every couple of years.

But we do not cut off the infested branches, and thus the parasites often grow back. We are just hoping to somewhat reduce the seed production and the spread to other trees. But we are also surrounded by state land with healthy mistletoe and phainopepla populations, so right now seeds are not only germinating on tree branches but also on my car, in our window screens, on the roof, on fence posts ... 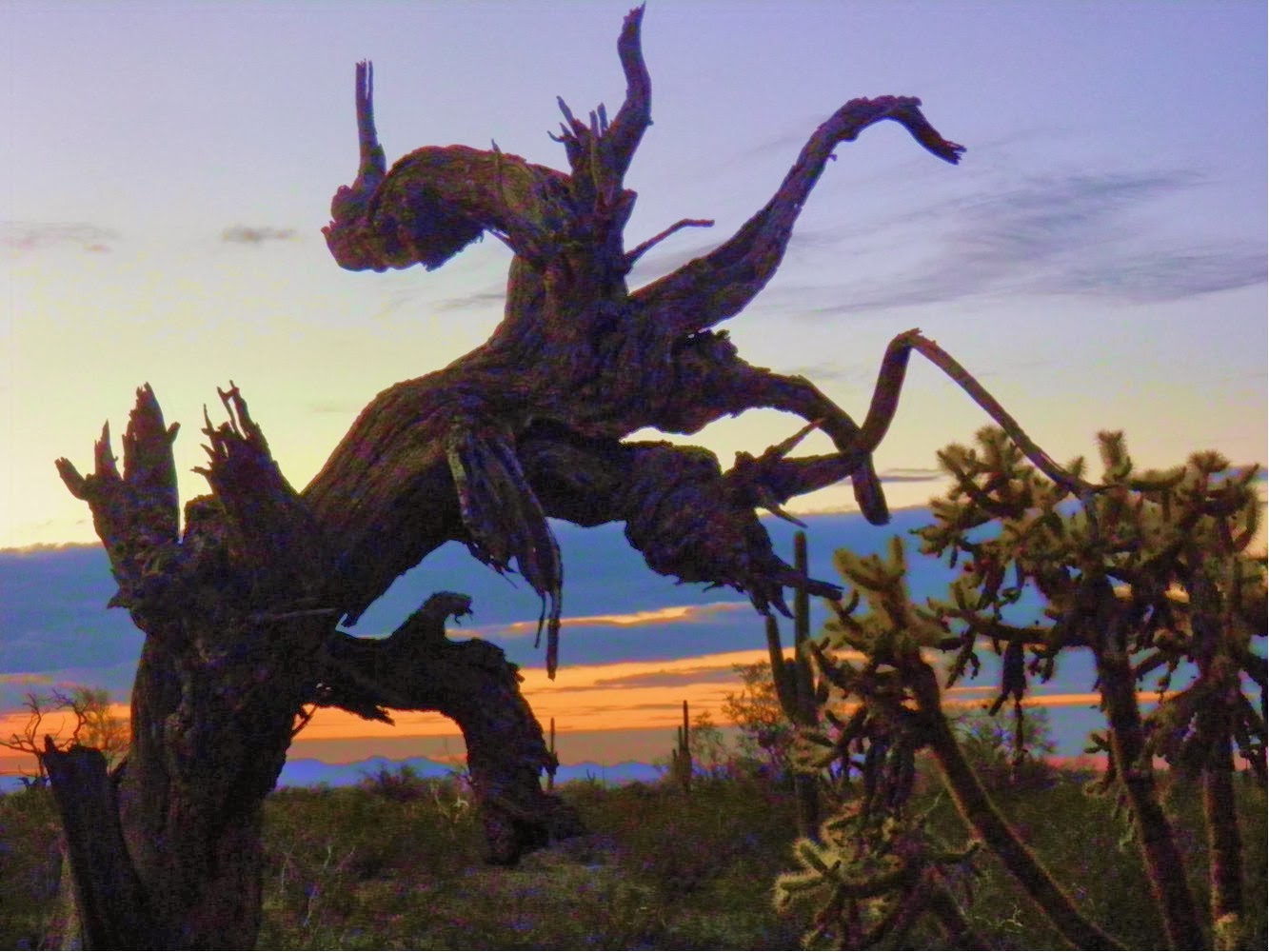 ps: I am surprised how few mistletoe plants are infesting the leguminous trees around Sweetwater in Tucson and the ponds around the Gilbert Water Ranch. While the banks are covered in mesquite and Palo Verdes grow along the paths, we found neither mistletoe nor Phainopeplas during our last visits.

pps: there will be a lecture about this topic at the Santa Rita Experimental Range this Saturday:

Too bad that I have an art show in SaddleBrook this weekend and cannot go!
Posted by Margarethe Brummermann at 4:31 PM