Of Cactus Flowers and Fruit 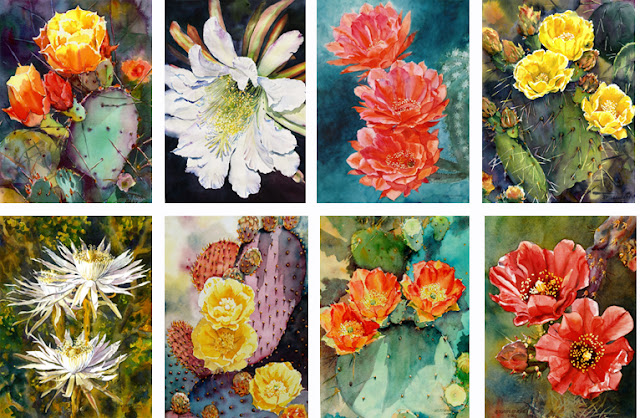 The flowers of chollas, prickly pears, saguaros, queen of the night and barrel cacti are strikingly beautiful but delicate and very short lived. If an individual bud opens in the early morning or even at night the flower will begin to wilt by noon with raising temperatures or even as soon as it is pollinated. If it lasts till nightfall it will most likely not open again the next day. There are cacti which go through their whole annual blooming cycle within one night and a short morning like the night blooming cereus, but most species produce enough successive flowers to keep the bloom going for a week or more. It doesn't matter how long it lasts: the bloom of the Sonoran desert cacti is a beautiful spectacle that we celebrate every year. It is also a reliable fiest: the succulent cacti are able to faithfully produce flowers even in drought years when the showy and celebrated annuals of the desert like poppies, lupines and Owl Clovers have to skip the year.

At least some rain is necessary for the cacti to follow the bloom with the more costly production of fruit. If it doesn't rain enough for too long even the fertilized flowers will just shrivel up and fall off. But in years of at least average rainfall the fruit of our desert cacti are not only at least as beautiful as the flowers but many also last much longer.

Saguaro Cactus
After the bloom in June, Saguaro fruit grow very quickly. They stay plain green on the outside. But as soon as they are ripe in late June they burst open to form a bright red star that advertises the sweet pulp and thousands of tiny seeds to birds and insects.

Generations of Tohono O'odam have collected the fruit to brew ceremonial wine. Midsummer dances of this tribe are a plea for good, life spending monsoon rains. By the time the storms arrive, Saguaro fruit are usually gone from the cacti and the seeds distributed by everybody who enjoyed the sweet snacks.

Pretty much exactly 8 days after each summer rainstorm all our tiny Mammillarias wear crowns of pink flowers. Shortly later they produce small red-pepper-like seedpods. Just the right size to be carried away whole by Trashers, Cactus Wrens, Squirrels and even ambitious Harvester Ants.

The beautiful Queen of the Desert Night chooses a warm night in June or July to open its flowers and fill the desert with its sweet heavy fragrance. Mysteriously, all plants in a certain area appear to be synchronized, while other groups, at only about ten miles distance, follow their own internal signal. Temperature, moon phase or humidity seem of little importance, or their interaction is so complex that I don't understand their impact. Anyway, every year I scout for new plants in the desert around our place during this spectacular night. This cactus is thin-branched and much less succulent than others. Instead, it has a big underground bulb to support it during drought years. Some plants dry up completely and rest for years before they thrive out and bloom again.
Elongate big fruit develop from the pollinated flowers. This year the Pima County gardener asked me for seeds, so I covered a fruit with a paper bag. While the woodpeckers made holes into the other fruits and harvested the seed pulp in mid September,  the protected one kept growing until I lost patience in late October.

Prickly pear Cacti bloom in late March and their fruit grow and ripen up to the end of summer. In good years a big Engleman's Opuntia can produce many pounds of purplish plum-sized 'pears'. They sit in tight decorative rows on the pads until in late September finally Gila Woodpeckers, Fig Beetles, ants and bees dig into the juicy flesh. Fruit that fall off are gobbled up by Desert Tortoises and Havelinas. Our neighbor boils prickly pear juice and jam, mustard and salza in big purple stained pots. With the harvest of the prickly pears, the bounty of summer is mostly gone.

Cacti that produce their fruit later in the year tend to hold onto them throughout the winter months. A bright yellow crown of fruit on often shoulder-high barrel cacti is a great sight when all other desert colors are rather drab. The fruit are nestled among formidable hooked thorns. Only the most daring squirrels and woodpeckers break some of them loose before their time.

The cactus is holding on for a good reason: The seeds, though ripe, will not germinate when it isn't warm enough. We spread seeds last year in December on moist sand in a container on the window sill, and they were just sitting there through the winter to finally produce little cacti at exactly the same time as some other seeds that we put out in March. The March seeds germinated after three weeks in the sand box.

Cane Cholla fruit also stay on the plant during the winter months. Their bright yellow color stands out against the clear blue sky. Winter visitors often insist that they saw blooming cacti on their hikes in December.

The Chain-Fruit Cholla drives holding on to its fruit to the extreme. It simply never lets go, so after every blooming season more fruit are added to the ones already hanging on the branches, forming long, dangling chains. I have to cut one open: I doubt that there are seeds inside. Instead, those green fleshy members increase the photosynthesis-surface of the cactus just like leaves would. This cactus is one of the jumping chollas, and spreads its offspring by enlisting animals and people to carry broken-off pieces into new territory (zoochory). This vegetative propagation produces clones of the originals, rather than new plants.

I like the fruit of the dainty Christmas Cholla best. Unassuming but pretty little star flowers appear in late summer, and the fruit cling to the thin green branches like red holiday decorations just around Christmas. They are juicy and sweet like strawberries. Of course, they don't last too long when they are ripe.
Posted by Margarethe Brummermann at 9:43 AM