Water and Song Birds at Sweetwater Wetlands in January 2012

On January 7 2012, I joined the Sweetwater excursion of the local Audubon Society led by Janine Spencer. Thank you Janine it was a delightful morning! It was cold and sunny, so the light was beautiful but the contrasts were a bit harsh. 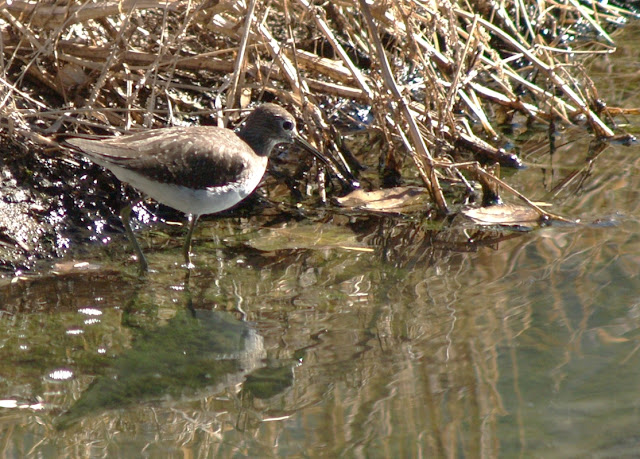 A Solitary Sandpiper poked through the mud, just one individual, but he turned up several times very close to the trail and the bridge, so I even got a video.

Hundreds of ducks, mostly Northern Shovelers were asleep along the banks or just waking up to preen themselves. The photo above is meant as a little puzzle. Can you find a pair of American Wigeons, Northern Pintails, a Ring-neck, and a female Mallard? 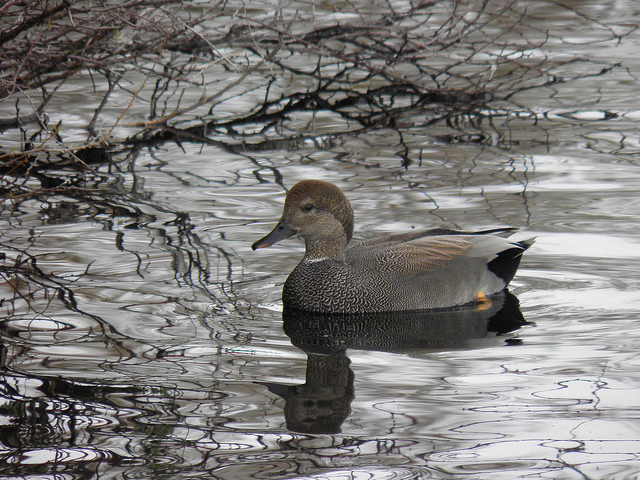 This shot of a subtly patterned Gadwall is on of my favorites. I just read a quotation from an old-time hunter who called it ' just a gray duck, nearly to be ashamed of, far inferior to a Mallard' To each his own! 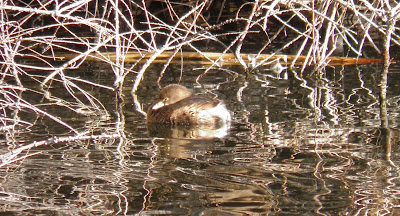 We also saw Ruddies, some Pied-billed Grebes (above), a Moorhen and of course many American Coots. A Sora Rail could be heard but not seen. 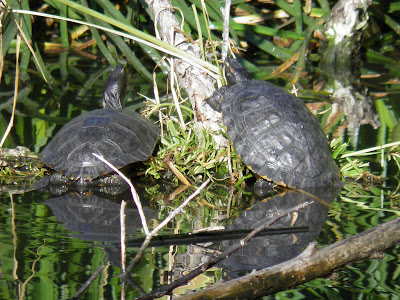 Sliders were basking - it got soon quite warm. I felt in my down west, carrying two cameras and binoculars.  At this time there seemed to be sufficient thermal up-drift for the local Harris Hawks to make an appearance. 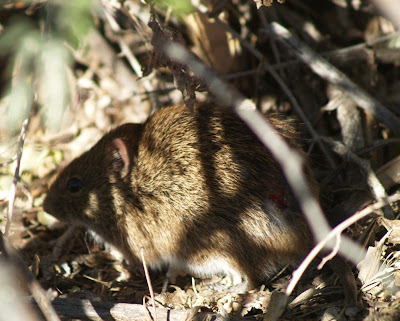 I finally got a shot of one of the rats that scurry in the salt bushes. I had to consult Rich Hoyer's blog for the species id: It's an Arizona Cotton Rat (Sigmodon arizonae). 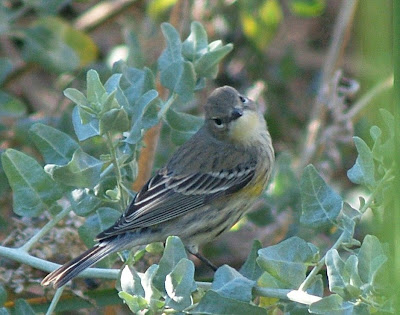 Scores of small song birds around the little pond right at the parking lot. Yellow-rumped Warblers were the most lively and numerous ones, and hard to photograph. 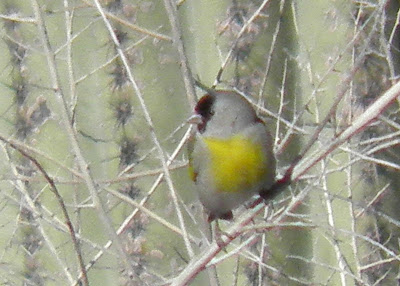 A group of beautiful Lawrence's Goldfinches shows up year after year. They posed nicely, but not quite close enough for my little camera.

On the ground, a Song Sparrow and a very uncooperative Abert's Towhee. But he is a character resident for Sweetwater, so his shot has to be here, no matter how blurry.

White-crowned Sparrow females were confusing until easily recognizable males joined them. They are familiar from the feeders at home where they show up every winter in good numbers

A Marsh Wren entertained us with his constant chatter, but he was hard to spot and nearly impossible to photograph, so I had to borrow this photo.

As it got warmer, gnats and other insects swarmed over the water. Black and Says Phoebe (or is this a female Vermillion?) were competing for the best perches from which to start their short, fluttering forays over the creek.

After consulting Rich Hoyer for Ids, and with Robyn Waayer's input, I'm now confident to add some more of the little gray, green, and brown guys that make birding so challenging and interesting. 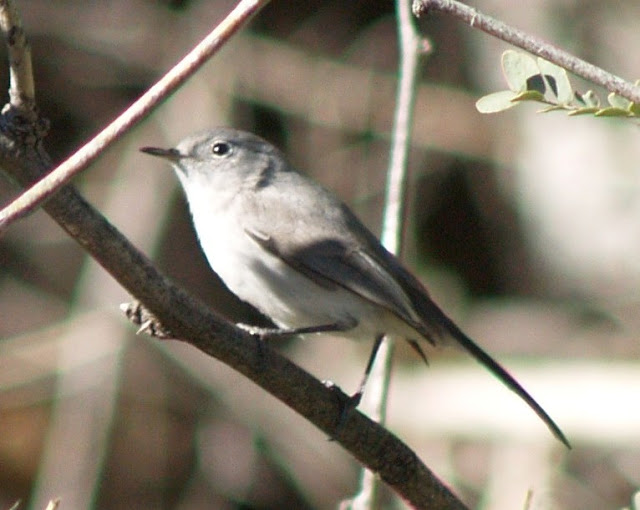 A female gnat-catcher, but from this angle and with this light it's impossible to tell whether it's a Black-tailed or a Blue-gray. I think there wasn't much gray on the tail, though. 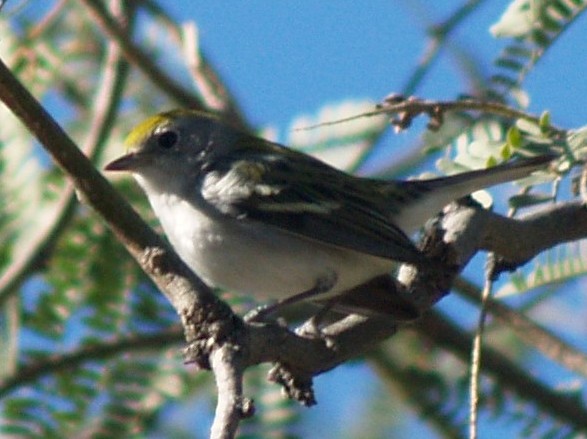 The Chestnut-sided Warbler that everybody wanted to see.  Check out Susan Beebe's excellent photo here also from Sweetwater. 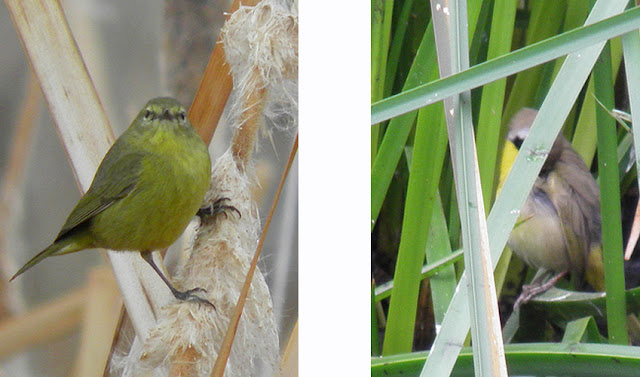 A cute Orange-crowned Warbler was pruning the cat tails. Was he feeding on seeds or bugs that were hiding in there? A couple of Common Yellow Throats teased me for half an hour while they invaded the territory of a ver upset Marsh Wren. I got lots of blurred action shots.

My photos are taken with a 150 mm zoom lens on my Olympus SLR and with my little SP-800UZ Olympus (30 x optical zoom). I wasn't carrying a tripod around, so if there was no bridge rail or tree trunk to stabilize my aim tI was just shooting freehandedly. While these images are just good enough to document a sighting and help with ids, I'm nearly ashamed showing them here, especially in comparison with Susan's and Muriel's excellent photos. Maybe I should invest into a better camera for bird photos, but my main focus will be on insects again soon. Spring is coming early this year in the desert, the Fairy Dusters are already blooming.
Posted by Margarethe Brummermann at 6:28 PM