Grasshoppers, Crickets and Katydids in December in Arizona

Before it gets really cold in the desert, which can happen any time between late October and late March or not at all, insect live seems to be limited by drying-up food supplies rather than just shortened day time hours or cold nights. When for example the grasses of the Empire State Ranch (above) turned brittle and dry the enormous grasshopper population there crashed within a couple of weeks.

Along creeks and rivers, where a narrow belt of vegetation is still green, and even around cattle ponds where algae and water plants become accessible by the falling water level, many insects, among them many grasshoppers and crickets, are still holding out even after some freezing night time temps.


Along the Santa Cruz River in Marana a continuous choir of tree crickets greets the visitor in the late afternoon. Most males are perched on big cockle-bur leaves that seem to provide especially good acoustics. Several appreciative females can be found close to every singer. The pair above right has already mated, there is a spermatophore visible at the base of her ovipositor (a little pink sphere).
Close to the river are large stands of willows (Salix gooddingii). At dusk a much fainter crescendo of little clicks made me search the canopy for another long-horned hopper, but it took two additional visits to finally find an extremely well camouflaged over 6 cm long female Greater Angle-wing Katydid whose male was probably the caller. This female was using her ovipositor to glue a row of her big disk-shaped eggs to a willow twig.

The purpose of the saw-like edge of the ovipositor isn't quite obvious in the Angle-wings, but there are other Katydids like the Scudderia species, that actually use this structure to separate the layers of a leaf to push the egg disks between them. Thanks to Carl Olson who made these images available from the slide collection of the UAIC! 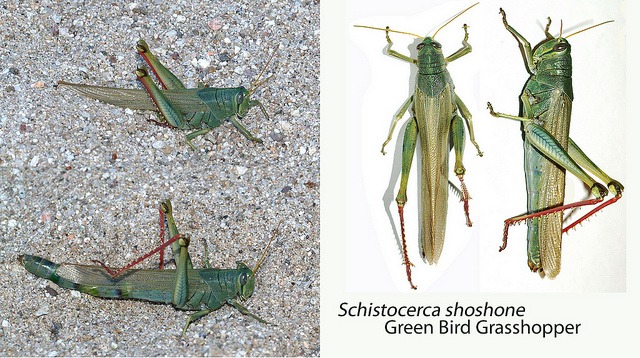 On the ground underneath the willows another big green grasshopper, Schistocerca shoshone, was pushing her eggs into the loose sand of a dry part of the riverbed. She belongs to the Orthoptera suborder Caelifera and lacks an ovipositor. Instead, her abdomen can be elongated like a telescope. When she pulled it out of the sand, it was nearly 2 cm longer than her wings. In the image above left it is already partly contracted again. The images on the right were taken hours later and show the normal appearance of this bird grasshopper.

Eggs that are laid now are most likely be the form in which these grasshoppers, katydids and crickets overwinter. Some of these eggs may even need a cold stimulus to end their diapause and begin their development. But I also saw some young Meadow Cricket nymphs and I know that adults of the most common band-winged grasshopper species shown above can be found all winter long.
Posted by Margarethe Brummermann at 9:04 AM