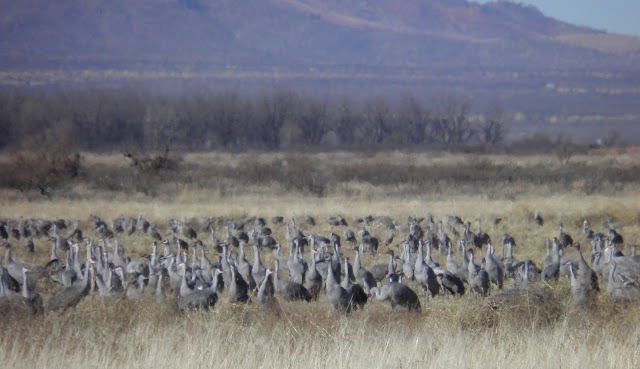 A winter trip to Sulphur Springs Valley has become a tradition that even Randy and the dogs look forward to. We cruise through the SE Arizona grasslands, pass Tombstone and then head for Whitewater Draw, where thousands of Sandhill Cranes rest and feed in the harvested fields. This year we had heard that there would be fewer cranes than in other years because of a lack of water in Willcox Playa, the main draw for the cranes.  But on Christmas Day there was a gray band of thousands of birds on the ground at Whitewater and endless chains of incoming new arrivals appeared constantly in the northern sky.

While I went exploring, Randy just wanted to sit and listen to the raucous calls of the cranes and mysterious rustlings in the reeds. When I came back with pictures of hunting Northern Harriers, frustrating sparrows, law-abiding shrikes, fighting coots and singing Marsh Wrens he had been watching (without binoculars) a 'big guy that was foraging in the cat tails for 'hours' ' and two little black guys stirring up the mud.

I was happy to find two little Sora Rails and started shooting away, but Randy kept pointing at the bank right in front of him to make me look at the 'big guy' - it took several attempts at triangulation to make me recognize the still shape of a stocky, extremely well camouflaged heron: an American Bittern. 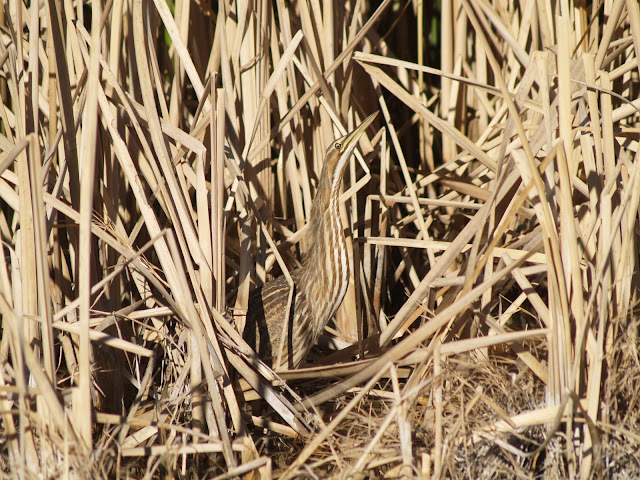 He was only about 12 feet from us in an upright, frozen pose that makes him really look just like part of the bleached dry cat tails. I kept loosing him when I changed cameras, even after I knew his location.

Finally he began walking around, searching and catching food. Even though he resembles Night Herons and Green Herons, his behavior sets the Bittern apart. He nearly never exposes himself by climbing up the bank or into the branches of trees like they would - he rather stays hidden in full view among the reeds on the ground.

I had an equally close encounter with a Least Bittern while I lived in Gainesville, Florida (still searching for the slides to add the image here) and I once saw an American Bittern at Sweetwater in Tucson from a distance. Otherwise, their booming deep calls were all I could remember from Northern Germany. 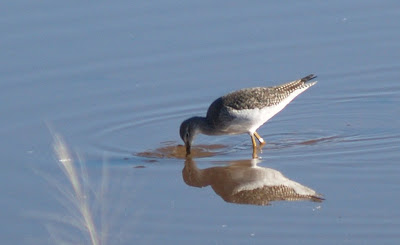 Beautiful views of a Yellowlegs were nearly anticlimactic after this. But the winter guest from the tundras of northern Canada knew how to put himself into the right light in the smoothly reflecting water. 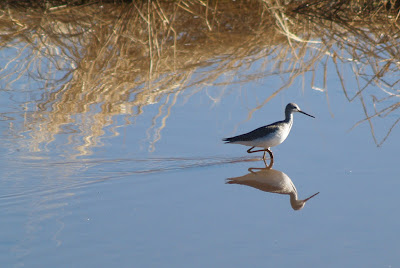 I think it's a Greater rather than a Lesser because of the long beak. 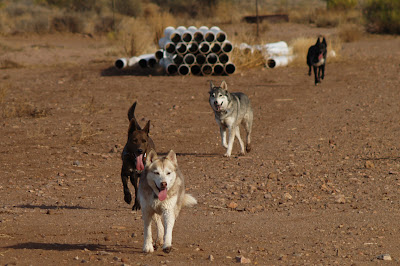 After giving the dogs a good run in the grassland (and waiting for the two 'pups' to return from an extended visit to a not so nearby farm) we headed back towards Tucson. Going north towards Interstate 10 we enjoyed the low light on the sculpted Mustang Mountains and views of  gleaming snowfields on Chiricahuas, Huachucas and Pinalenos.

More avian excitement awaited us among the artesian ponds and swampy meadows of Benson: The meadows were literally black with birds from a distance, but swarms flying up and billowing over the road, turning in unison against the light showed their yellow heads for a moment, before swinging into the other direction and turning into a black cloud again. 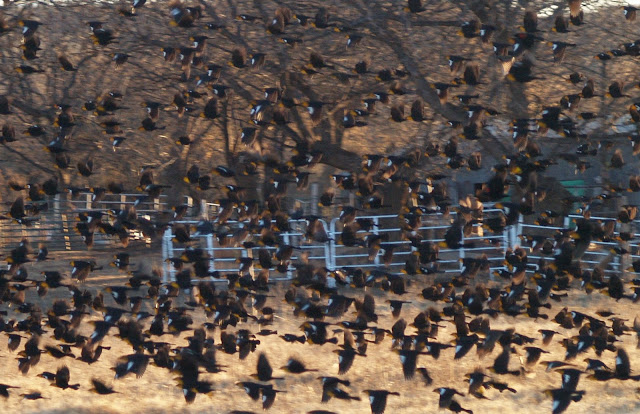 Yellow-headed Blackbirds - many thousands of them. The pictures were taken as the sun just sank below the horizon, changing the color palette abruptly from warm golds to hues of icy blue.
Posted by Margarethe Brummermann at 1:10 PM