Herping on the side, and some mammalian encounters

Last weekend, Robyn Waayers from Julian, CA, visited to enjoy the late monsoon activity and the bugs the monsoon brings out in Arizona. We picked up Eric Eaton, and made arrangements to meet some other naturalist friends for black lighting session in different canyons of the Catalinas and the Santa Ritas. Despite many blind spots for even the smartest cell phones in these mountain ranges all connections were eventually established. 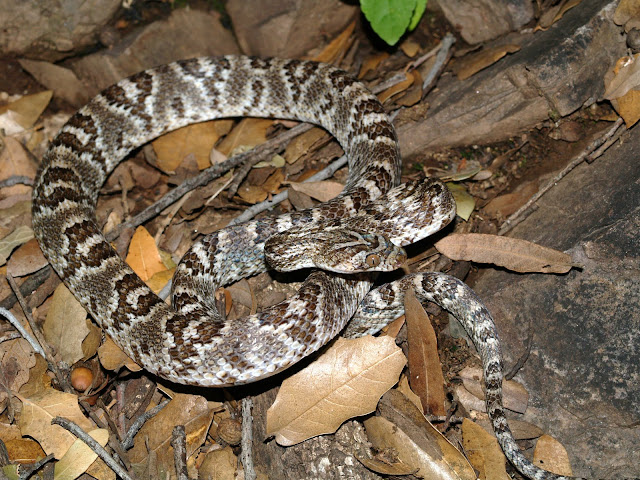 In Peppersauce Canyon in the Santa Catalinas Bruce Taubert and I cornered a beautiful Western Lyre Snake Trimorphodon biscutatus. It had vertical pupils and slightly triangular shaped head. With a vibrating tail and a hiss that sounded very much like a rattle the snake did somewhat of a rattler imitation. It's not a total bluff: its grooved hind teeth are used to envenomate prey that in addition is subdued by the coils of the muscular body of the snake. 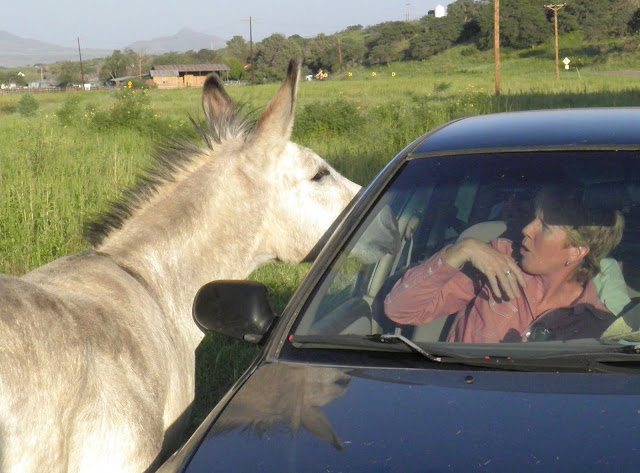 In Box Canyon, Santa Rita Mountains, the next vertebrate, Equus africanus asinus,  took the initiative and investigated us: he marched around the car, rubbing his behind against bumpers and mirrors and shoving his head into every open window. My straw hat was mistaken for a treat and I had to pry it from the burro's teeth.

All our trips take much longer than expected, so we were hurrying west through Box Canyon to meet with Nancy from Wisconsin in Florida Canyon. But the best intentions .... At dusk, Robyn spotted a Gila Monster crossing the road. It was Eric's first, finally just before he is leaving Arizona. Herpetologists assume that the monsters are not really rare, but their life style usually hides them even from avid naturalists. They spend most of the year under ground, probably not even feeding much. 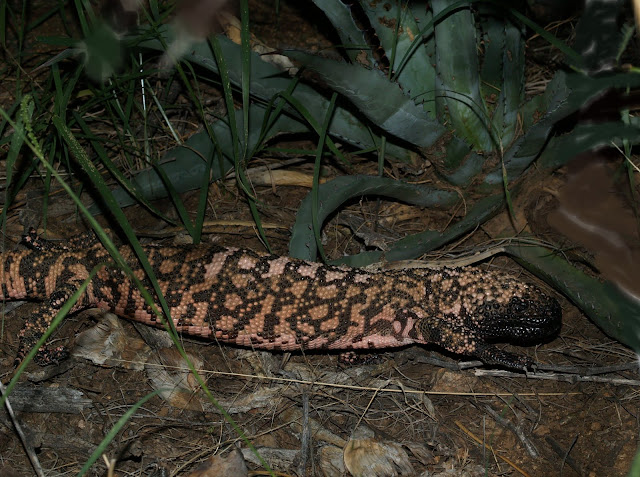 The best times to see them is in June, when clutches of quail eggs provide enough provision to fatten up the Gila's tail, which seems to be his main energy storage. A second wave of observation reports usually coincides with the monsoon in August when female Gila Monsters lay their clutches of up to 12 eggs (but only every other year). 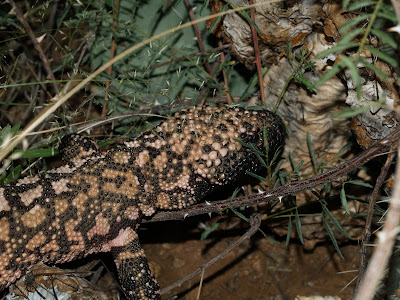 Our monster was obviously annoyed and hissed at us from his gaping black mouth. Gila Monsters are venomous, but they are hardly fast enough to grab a human and chew on him to transfer the venom that is secreted by glands in the lower jaw and released along grooves in the teeth. 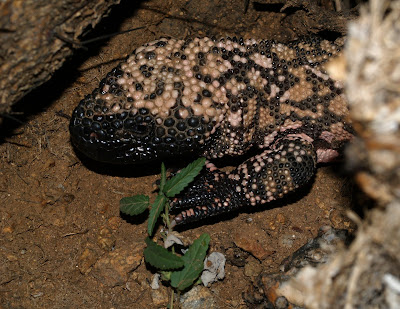 Later at Florida Canyon we found the biggest and heaviest Sonoran Desert Toad that I've ever seen. I need both hands to lift the heavy guy out of the brush around a light where he was harvesting an abundance of bugs, mostly Oxygrylius ruginasus. I hope that Robyn has a picture of that guy. My hands were full.

Posted by Margarethe Brummermann at 12:41 PM