Since there is no parking close to campus, I get a nice morning walk and a very hot afternoon work-out whenever  I'm working at the University of Arizona Insect Collection. It's an urban environment, but with very nice old established xeroscaping in the residential areas. After the first monsoon down-pour, even a fence made from ocotillo clippings sprouts fresh green leaves 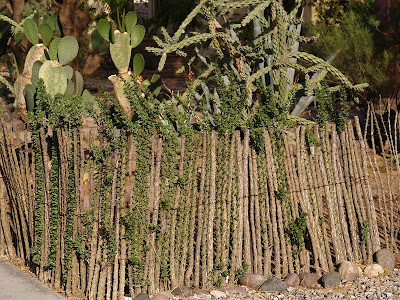 I always have my camera ready for interesting  encounters. Cicadas are singing and huge Cicada killers are buzzing about, Carpenter Bees hover around palm trees...I've seen Trap-jar ants carrying Harvester Ants in their huge fangs. There seem to be more lizards in town than in the true desert environment at our home.


Today a beautiful metallic blue wasp was searching for prey under a thick layer of mesquite pods that recent rains had deposited in the gutter. Eric Eaton confirmed from the photos: clearly a Chlorion species. So it belongs to the wasp family of the Sphecidae, the Thread-waisted Wasps. These solitary wasps either dig burrows to lay their eggs or build mud structures. They  provision their brood with life prey that is paralyzed by the wasp's sting. Their choice of prey is strictly species specific. (Of course there are exceptions: some are klepto-parasites, who they let someone else do the hunting and digging). 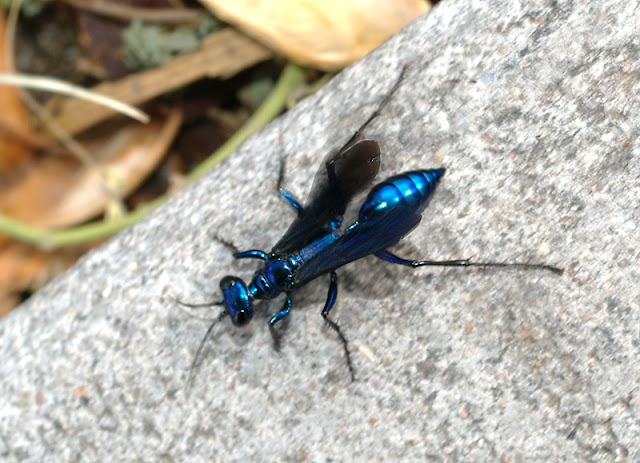 At first I assumed that this wasp was C. aerarium, the Cricket killer. The layer of nutritious, moist debris seemed like a very reasonable spot to look for crickets. The wasp was thorough, sometimes disappearing under leaves and seed pods, sometimes running around with its typical jerking, twitching movements. 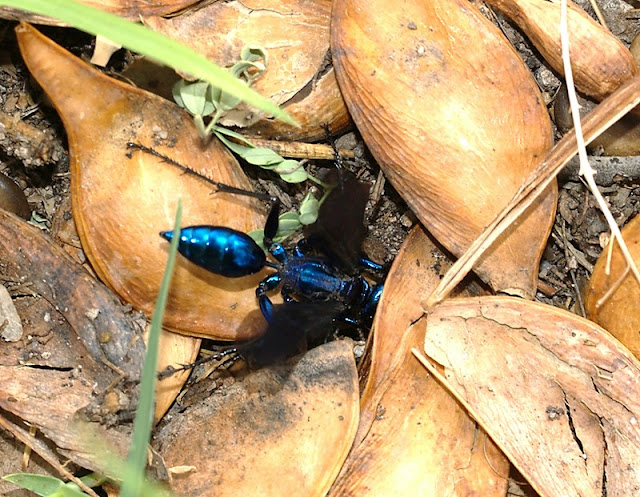 A couple of times she came out onto the pavement as if to catch her breath, always returning to the same section of leaves and intently searching- she must have known that there was something hidden. 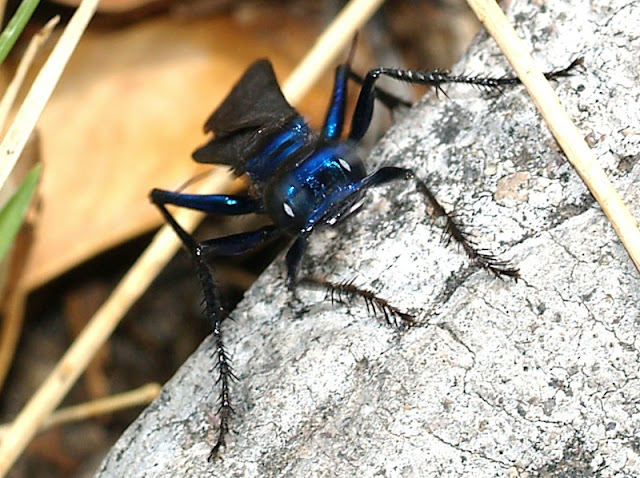 Then there was a rustling struggle among the leaves and the wasp finally bend her abdomen forward to carefully place a sting into something that her front legs and huge jars were pinning down out of sight. Now I know why she needs such a narrow bendable waist (petiole)! 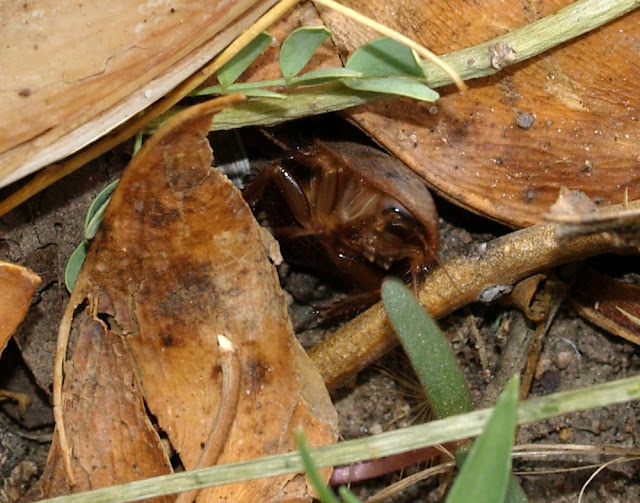 After the sting, the wasp backed off, probably to wait for the paralysis to take hold. The prey that became visible was a surprise. No cricket at all, but a female Sand Roach. I had only once before seen one, in the dunes at Parker when Charlie O'Brien was sifting sand for weevils. But winged males of two species are commonly seen at porch lights around Tucson.

Anyway, the unexpected prey made me rethink the species ID for the wasp. There are two species of Chlorion in Arizona that are very difficult to tell apart in the field or from photos. But while C. aerarium feeds  crickets to its larvae, C. cyaneum hunts roaches for its brood. So my wasp can be safely identified as Chlorion cyaneum.

To me, C. cyaneum looks bluer (kyanos, Greek, dark blue) than the verified C. aerarium specimen in my photo collection (above), but according to literature and specialists, that's not a good diagnostic character.

Unfortunately my observations were abruptly ended by a group of students (isn't the semester over?)  jogging down the road. While my wasp had been very tolerant of my camera, she got spooked by so many stomping feet. Since I had no time to wait whether she would return to the paralyzed prey, and female Arenivaga Roaches are hard to find,  I collected the abandoned roach.
Posted by Margarethe Brummermann at 3:14 PM