The German word 'Raubritter' has no good English translation that I know of. In lawless medieval times rogue knights were sitting in their fortified castles along European trading routes, ready to capture, rob and often slay passing travelers. Similarly, robber flies perch by day on objects near the ground, watching every movement in clearly binocular vision, always ready to fly up and strike at any insect prey that passes by in the air.


Last week on our trip to Mount Lemmon, the highest peak of the Catalina Mountains, Eric Eaton and I  found some exceptionally large specimens. The one in the picture above had just caught a grass hopper of the species Trimerotropis modesta.  The fly had grabbed it, injected its paralyzing digestive juices through its pointed proboscis and then sucked out the dissolved tissue of the grasshopper. After the robber fly had finished its meal, the exoskeleton of the grass hopper seemed mainly intact.

The robber fly below has caught a honey bee by grabbing it by the thorax and holding it in the firm grasp of its bristly legs so the bee had no chance to sting. The bristles at the tip of the female's abdomen, called acanthophorites, help her to push the abdomen into the soil to lay her eggs.

There are nearly 1000 species of robber flies (Asilidae) in North America, and most of them live in the hot, arid Southwest.The family has members of all sizes from 3 mm up to 5 cm.

It seems understandable that we found several very large species on Mount Lemmon: Like many  insects robber flies stake out  territories on local high points (hill tops) of the terrain, and size and strength are great advantages in the constantly whipping wind on Mount Lemmon that could easily rip any hunter or courting male off its exposed perch.

Around Tucson, bumble bees occur only in the higher elevations. They share the mountain habitat along the Meadow Trail with  Laphria engelhardti, one of the many bumble bee mimics in the genus Laphria. When startled, it flies only for a few feet, very low over the ground, so the strong wind can't catch it.

I photographed this pair at the end of August 2009 on a hill top along the north side of Sabino Canyon.
. 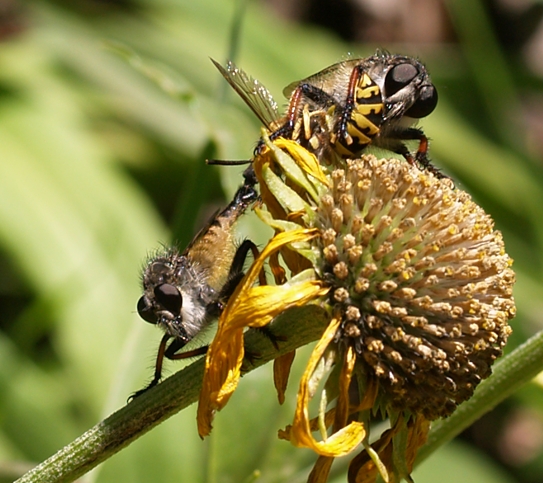 As with many powerful predators, the male has to take quite a risk when he approaches the female to mate. Usually they seem to approach from above and behind and grab the female before she can go on the attack. Asilid males haven't come up with the gift-bearing trick that some other relatives in the fly family use, but it doesn't hurt to find the female already busy with prey. In this case the mating couple devoured the yellow jacket together.

Posted by Margarethe Brummermann at 7:55 AM