Firefly without a flash: Pyropyga nigricans 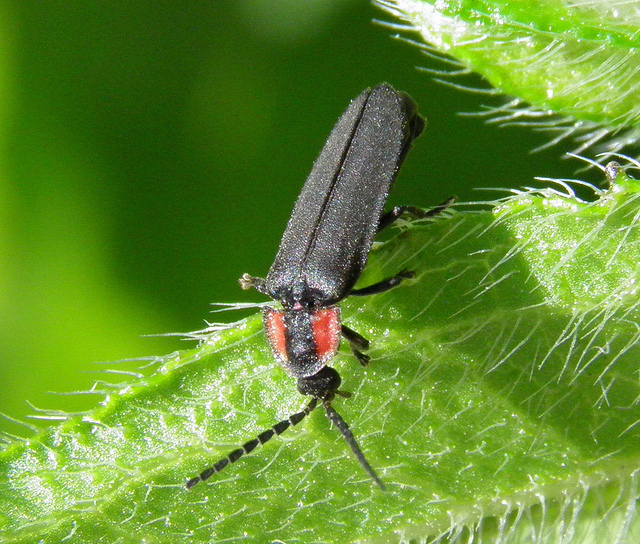 When I walk to the entomology department in the Forbes building on the U of A campus, I pass well irrigated manicured lawns. Since the end of May, little black insects were flying there. They first reminded me of March Flies until I saw the spread elytra - they were clearly beetles. It's an interesting experience to chase down a flying object with a somewhat erratic course, too small to be noticed by most humans, while walking among students absorbed in texting and phone conversations. It makes them emerge from oblivion and stare...Finally I swiped my hat in flamboyant musketeer fashion and caught one. 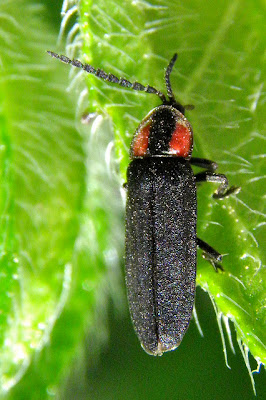 The narrow dark beetle is about 8 mm long, soft bodied, has flattened antennae and the head is hidden under the half-circular thoracic shield with a continuous  black border, rosy sides and a wide black middle stripe. This is Porpyga nigricans, a very common western firefly or lampyrid beetle.(The western distribution of P. decipiens, 4.5-7.2 mm is unclear. P. minuta is smaller and its US distribution ends further east). 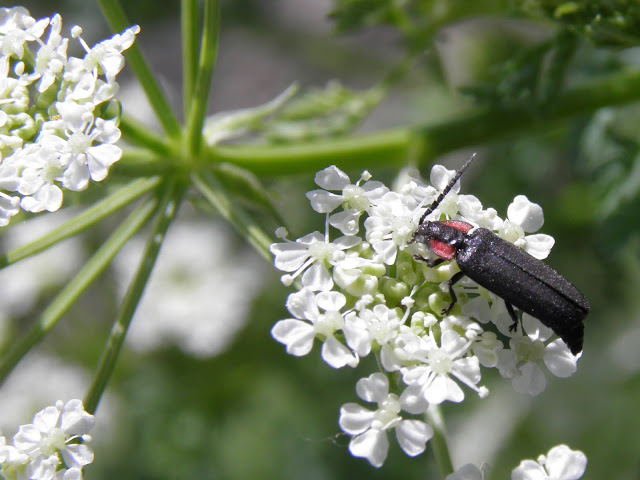 Adult fireflies in the genus Pyropyga are day active and have no luminescence. Both sexes are winged (aleate) and can fly, but specimens with reduced wings have been found, too. Males and females find each other with the help of pheromones. In captivity the larvae have been raised on snails and small earth worms. I guess the irrigated lawns offer a similar diet. I've never seen any Pyropyga around our house in the desert but I have photos of a specimen from the research station in Portal where there are ponds and swamps (when the water isn't used up to fight forest fires).

The heamolymph of Fire Flies contains lucibufagins (Eisner et al. 1978), steroidal pyrones. Droplets can be expelled from joints and membranous parts of the exoskeleton as a defense against predators and birds and lizards show strong avoidance of these beetles. As many other poisonous insects, Propyga also has its mimics:some Soldier Beetles (Cantharidae) and  Netwing Beetles (Lycidae) look very similar to Porpyga and may also be poisonous in their own right (Muellerian Mimicry enhances the effectiveness of the warning color/pattern for all of them). 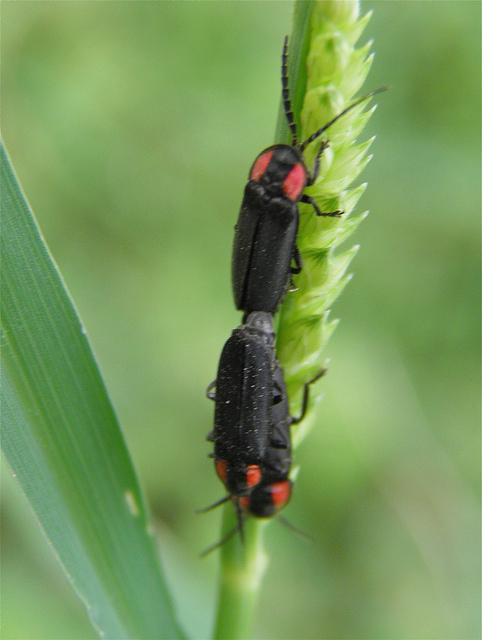 P.s. mating activity is high in August on the lawn of a fraternity house on University Boulevard, that always irrigates the lushest lawns in the neighborhood.