The campus of the University of Arizona is very poor of native plants. This is difficult to understand given the very interesting and enduring plants that are available for gardening in our desert environment.  The U of A should be a trendsetter in the field of water conservation and xeroscaping, but instead there are beds of petunias.... 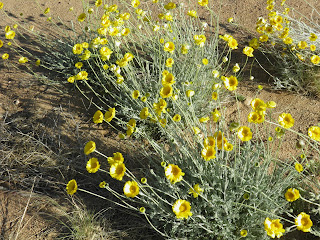 But a few Desert Marigolds (Baileya multiradiata) escaped the gardeners' scrutiny and keep reseeding themselves in little patches around Old Main. Yesterday on my way to lunch, I was looking there for bees to photograph. 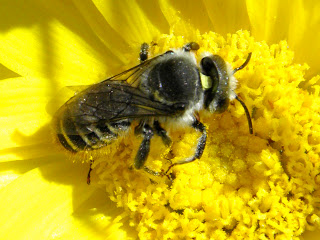 While zooming in on some nectaring Leaf-cutter Bee, I noticed another insect that  resembled the  bees in shape and size, but was hovering and bobbing up and down nearly in the fashion of a bee-fly.

It didn't seem to be interested in the yellow discs of the blooming daisies. It approached instead everything that looked like a flower bud, including dried up old stalks. Then I caught a glimps of fanned antennae. Greek rhipis (ριπις) 'fan' + phor (φορα) 'bearing':  Eureka, a  Ripiphorus! (since my knowledge of Arizona beetle species is far better than my Greek,  the revelations arrived the other way round. So, scratch the 'Eureka!') But anyway, this does not belong to hymenoptera or diptera, but to coleoptera, this is a real beetle.  Ripiphorus vierecki is the species most commonly observed in the Tucson area. 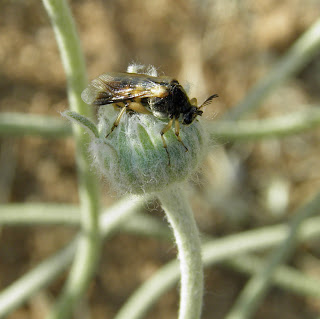 I caught the beetle and took it back to the department, where the entomologists were dutifully impressed, but everybody else said 'yes, I see those all the time'. Hmm.

I did see a couple more Ripiphorus on my second attempt to get lunch, so I went on a diet for the day, and then I found another three on my way home on a patch of Desert Marigold on the west side of the Tucson Mountains. All were clinging to unopened buds. I looked again the next day, but all the flowers were blooming by then and there were no beetles, just bees. 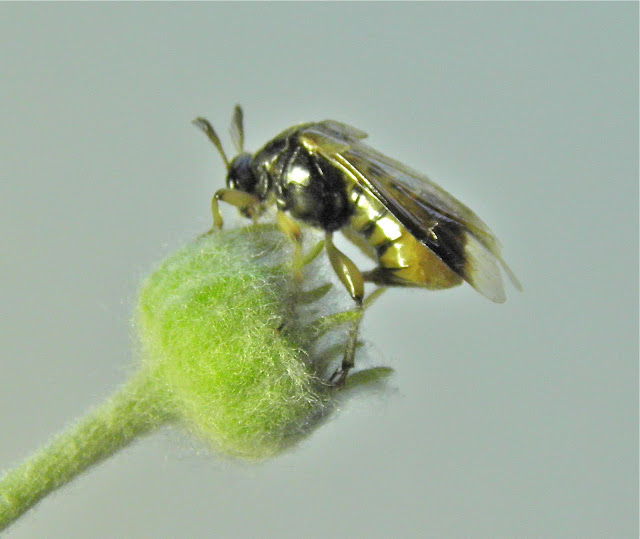 There is a good reason for this. All the beetles I saw were females, ready to lay their eggs.  I the picture above the ovipositor is visible under the beetle. She is going to plunge it into the unopened Marigold bud and deposit her eggs just in time for the larvae to hatch when the composite flower opens. At this time bees will visit the fresh flowers, and the beetle larvae will hitch a ride to the bee's nest where they will live first as internal, later as external parasites of the bee larvae (Nomia, Diadesia and other spp.)

Ripiphorus males have bigger antennae than the females, indicating that they find the females by sensing their pheromones. They have a very short lifespan and usually don't show up on flowers but instead frequent the nesting site of the host, waiting for emerging females. I had to borrow this photo from Bug Guide (Creative Commons G. Corman).