Birds, Bugs, and Herps in the western Santa Rita Mountains

Eric Eaton and I took a trip to the Santa Rita Mountains (a last one before Eric moves to Colorado or the mountains get eaten up by the planned Rosemont Copper Mine? I hope not). 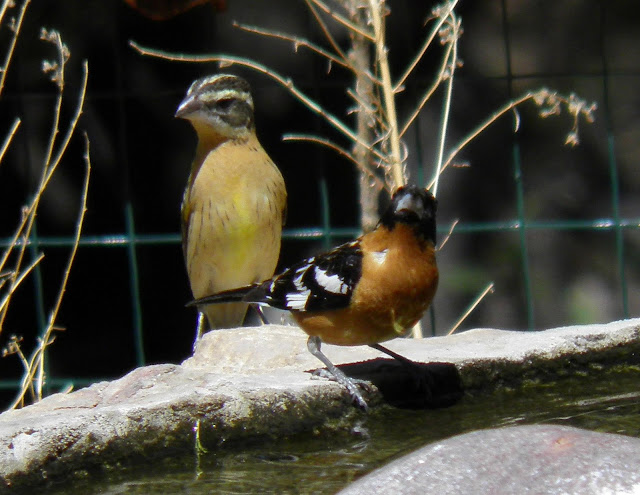 We went to Madera Canyon Lodge first. Still lots of bird activity, we especially enjoyed the Black-headed Grossbeaks. Caught a glimpse of a Lazuli Bunting, mistook him for a Bluebird, didn't get a photo.

Blooming Velvet-pod Mesquite Trees would have been interesting enough to spend the day. But we were headed for yet another canyon.


At Florida Canyon, a short stop at the creek revealed no water, but Eric spotted and orange flash among the rocks and dry oak leaves: the short distance flight of the incredibly cryptic Oak Leaf Grasshopper.

Butterflies often patrol creeks and roads in the mountains. As it was rather windy, a Spotted Purple found a perch above my head and wouldn't leave, even when I pulled him down to eye level. An imitator of the bad-tasting (so I was told) Pipevine Swallowtail, he had some people fooled.


Those Thistles yielded scores of interesting bees that I'm saving for another blog and some enormous Sand Wasps - for scale, just consider that the Didasia on the right is about the same size as a Honey Bee. 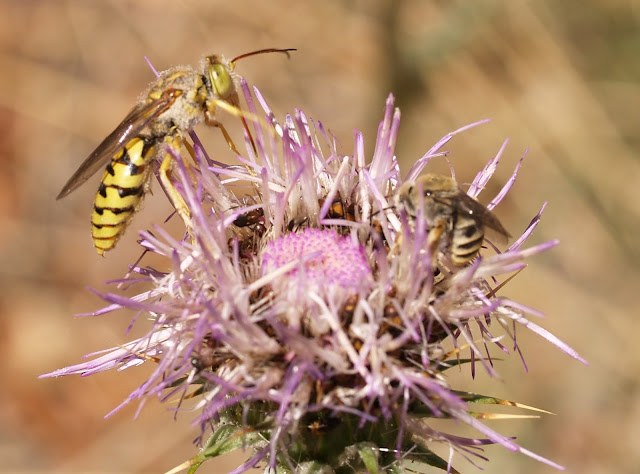 A nice Ambush Bug also showed up on the thistle. This species is always recognizable by the arrow head on its back.

The canyon is full of Sotols, Yuccas and Agaves with their own fauna of bugs and beetles. Since the tiny Mirids defied our photo skills,  here is a photo of the very cute, cooperative agave weevil.

Prickly Pear Cacti were not blooming yet at this elevation, but the pads were coming to life and oozing juices.
We found all the True Bugs that we expected and more. Also Soldier flies and many different species of wasps that were drawn to the sugary leaks.

When all these insects tumble around among those sharp spines, accidents happen. I often find impaled flies or bees. This time it was a male Glow Worm. According to Eric, the males fight during courtship which could have contributed to his predicament.  We got him off the thorn.

Several very bright red male Lycus sanguineus were impossible to overlook. Much lighter and equipped with larger wings than the flightless females, they usually allowed only a few shots before taking off. 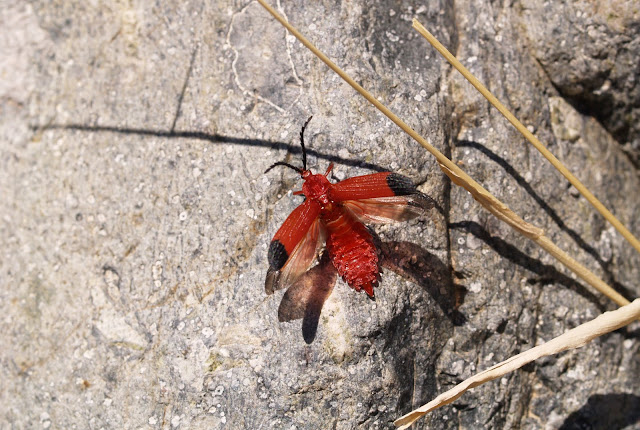 One more vertebrate on the way down:  I found this snake after I'd already stepped over him with one foot. For a Sonoran Whipsnake he was quite patient, but once he got going, he disappeared in a flash.
Posted by Margarethe Brummermann at 5:50 PM