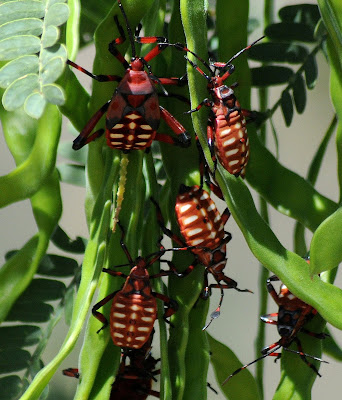 Lately I have received several inquiries about clusters of colorful 'Beetles' that are clinging to the leaves and seed pods of Mesquite Trees in Southern Arizona. Luckily, photos from omnipresent cellphones cameras accompanied the questions. It turned out that the 'beetles' were actually the nymphs of true bugs, of Giant Mesquite Bugs, Thasus neocalifornicus. (a revision of the genus by Brailovski et al in 1994 states that this is the only species of the genus in the United States, while T. acutuangulatus and T. gigas occur only south of the Mexican border).


How to tell a beetle from a true bug
Beetles and many true bugs are often confused because superficially they can look quite similar, as the picture of Paranthesis Ladybeetle and Harlequin Bug shows. But at closer investigation their morphology and life cycle are very different and they are therefore grouped in different taxonomic orders. 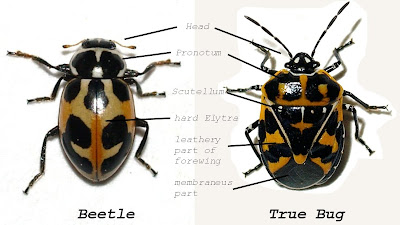 Beetles (Coleoptera) are the largest order of insects. From above, the body of a typical beetle shows three obvious parts:
the head with compound eyes, chewing (in most species) mouth parts, and antennae that can vary in shape and usually have more than 10 antennomeres.
the pronotum, which covers the prothorax.
the hard forewings or elytra which cover the membraneous flight wings and the rest of the body like a shell. A small scutellum may be visible where the two elytra and the pronotum come together.

The mouth parts of True Bugs (a specific group of Hemipterans) form a tubular rostrum in accordance with their piercing sucking function (true bugs suck!). The antennae have only 4 big antennomeres and are long, thin and angular. The pronotum is usually as wide as the base of the wings. A very conspicuous triangular scutellum is located behind the pronotum between the wing-bases. The forewings are hard only in front and membraneous towards the tips. The borders of the scutellum and the dividing line between those wing parts forms a conspicuous X that helps to easily recognize the group.


The Life cycles of beetles and true bugs shows how very different they really are
Both beetles and true bugs hatch from eggs. Beetle larvae are elongate and may superficially resemble caterpillars. They eat voraciously and shed their skin repeatedly to allow for growth. But they still look like grubs until they finally pupate. During the immobile pupa stage their bodies undergo radical changes to become the winged, sexually active adults that we know as beetles (complete metamorphosis).

Even newly hatched True Bug nymphs vaguely resemble their parents in shape, if not coloration. They go through a fixed number of moults ,5 in most cases. Each resulting instar is a step closer to the size and shape of the adults until they emerge from the last moult winged and ready to propagate (incomplete metamorphosis).


Timing is everything
Lets follow the development of a cluster of Giant Mesquite Bug eggs that were deposited by last year's generation, maybe in a protected spot under loose bark of a Velvet Mesquite Prosopis velutina in Sabino Canyon close to Tucson. In late April, mesquite leaves unfold explosively to shroud the somber, deciduous tree in lush fresh green within a couple of days. This is also the major blooming season of the mesquite trees. 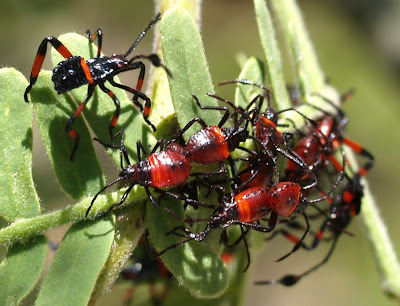 At this time little nymphs hatch from the eggs, feed on the leftovers, and almost immediately moult for the first time. If they are not already on their food tree (we found many clusters in the shrubbery underneath the mesquites) it's now time to climb up to those fresh, juicy mesquite leaves. 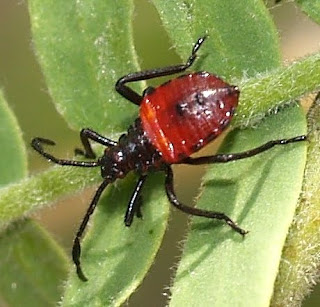 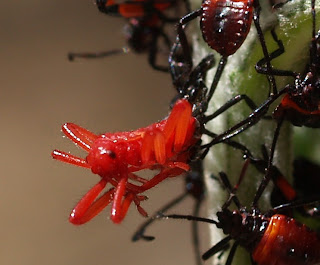 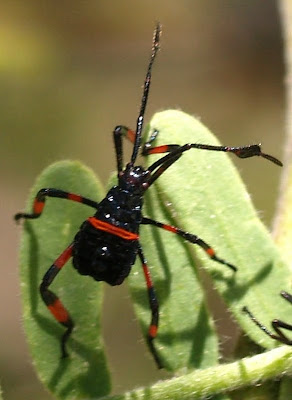 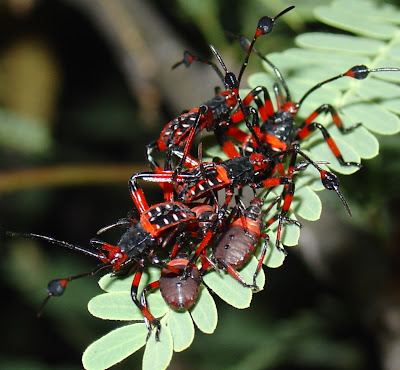 Third instar nymphs Photo by Tuan Cao
The bright red, black and white pattern becomes even more conspicuous in the third instar. The nymphs are still staying closely together as a group, projecting the appearance of a much bigger animal and probably of a very bad tasting one. 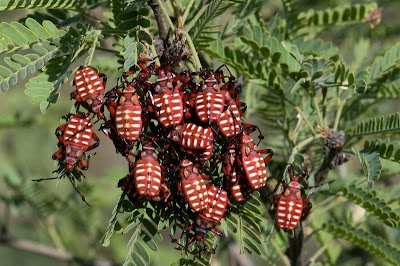 They can afford to stay together because they don't have to compete for food: While the nymphs are getting bigger and hungrier, the tree has begun to put a lot of resources into the production of long, juicy mesquite beans. The pods themselves, not just the seeds, are sugary sweet. Over centuries the people of the southwest have used this abundant resource for flour and to feed countless cattle. Even Coyotes rely on the pods for 80% of their summer diet. Javelina scat is full of them. Sucking the juice of these fast growing seed pods, amazing numbers of mesquite bug nymphs are able to grow quickly to their astonishing adult size without any obvious harm to the tree. 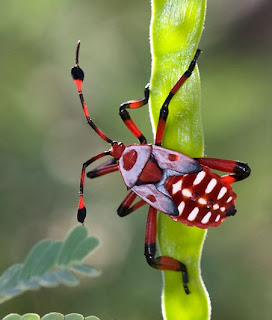 pring came late to the foothills of the Catalina Mountains north of Tucson. So the mesquite beans are still growing and the bug nymphs are still in their last, 5th, instar close to the end of June. 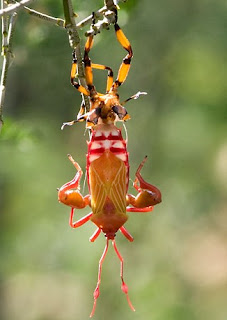 By the time the monsoon moisture rolls up from the Golf and the July heat begins to pile up huge thunderheads over the Catalinas, the mesquite beans will be ready to fall to the soaked ground to be swept away by running washes until the pods rot and set the seeds free to germinate. By then the mesquite bugs will have turned into huge adults with strong legs that can cling to branches during afternoon storms and fly to disperse and meet their mates in the heat of the day. The adults are about 2 inches long. 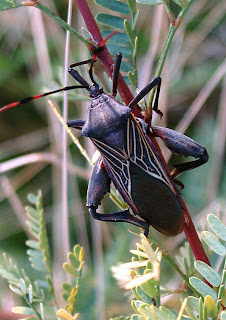 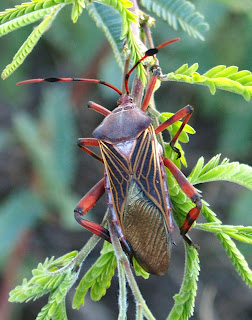 Posted by Margarethe Brummermann at 5:08 PM