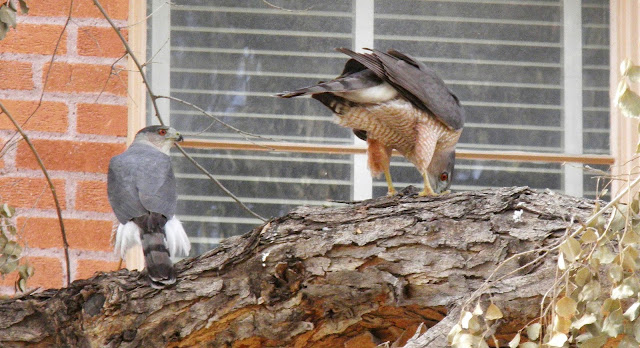 Out here, in the open desert west of the Tucson Mountains, Red Tails, Harris Hawks, and Kestrels are a more obvious presence than Cooper's Hawks.  But the Cooper's stealthy way of hunting from a hidden perch may have something to do with that.  For years we knew that a big female Cooper's was using our neighbors' big mesquite tree as her daytime roost.  Nearly every morning she makes one fast swoop at the doves and quail that enjoy a one-time feeding in our backyard (just a handful of seeds tossed on the ground). This usually results in a lot of fluttering, squaking and aggravation, and even our dogs join in the melee. 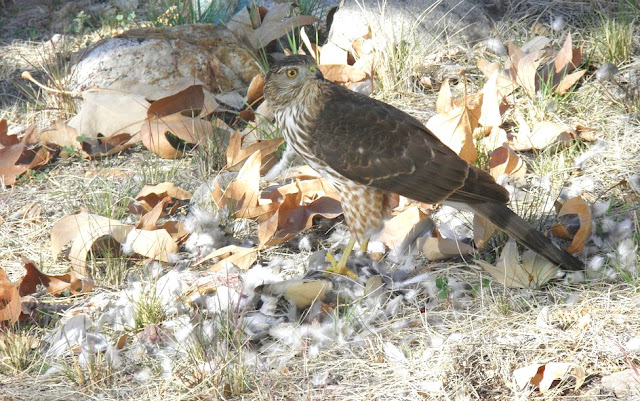 We rarely witness a catch. But we find telltale piles of feathers, mainly of doves, but once even the wings and tail of a screech owl. Over the last months, the big female and her mate must have been raising a clutch of young ones in another neighbor's big old pine tree.
During that time she was less visible. But lately got into some territorial disputes with the local group of Harris Hawks that was trying to take over her mesquite tree, so she's probably back to her old habit of spending the day in its cool, green canopy..  Several fledglings must be on their own, and  they are becoming a menace.

When we walked with our dogs this morning just after six, we heard a distress call from a Gila Woodpecker. It was flying erratically among the saguaros, trying to escape a smallish Cooper's that was matching its every turn. The Cooper's was relentless. We watched them for what seemed several minutes:  the Gila always nearly getting away, flying in tight curves to evade its pursuer, but the the Cooper's matching its desperate tactics in every turn. Eventually, when they were just out of sight, a last scream from the Gila told us how it ended.

The Gila Woodpecker may have been an inexperienced youngster. We had  woodpecker nests in nearly every saguaro and the young ones only fledged some few weeks ago. It always seems that the cavity breeders like woodpeckers and Kestrels take their time growing up in the safety of their climate controlled saguaro holes. But now they are out and live is hard - the summer rains so far have not even really started, insect numbers are down, and only Prickly Pear fruit are available in unusual abundance. 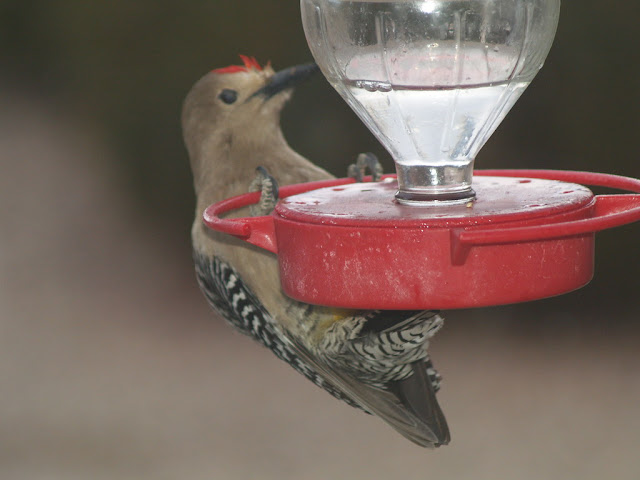 For years we had some established adult Gila Woodpeckers that frequented our hummingbird feeders. Individuals had their own special techniques to get to the sugar water, so we got to know them well.
One male used to tip the feeder with his weight, causing messy drips under the feeder, another one used his long tongue to reach in, one female employed a very distinctive tremolo to induce sugar water to flow from the seams of the feeder. For years, a pair spent its resting time right in front of my studio window and brought their young ones to my feeder as soon as they could fly.

This August, all those patterns seem disturbed. When Robyn Waayers visited to photograph desert birds, I thought that the Gilas would be her easiest targets, but they made themselves rarer than the Gilded Flickers. I have been finding an ominous amount of plucking sites with black and white banded feathers - clearly from Gila Woodpeckers. Should one of the young Cooper's hawks be a Gila Killer?  This suspicion is not too far fetched.

In the eighties, my friend Erik Kretschmar and his ethology professor Eberhard Curio raised a number of the smallest European Accipiter species - the  Sperber (Accipiter nisu) to investigate how prey preferences were formed, as the prey base of the species includes many different animals from insects to birds to small mammals, but most individual birds are more specialized. I short, they found that the first hunting experiences of a youngster are quite determining for its further  career as a hunter.  Success in grabbing a tasty mouse during early trials may make a particular hawk a rodent specialist, while clashing into a nasty thorn bush in pursuit of a lizard may sour that kind of prey for this particular bird. I do not remember how specific that imprinting process was. It cannot be too narrow or it would limit the food supply for the bird too much, but it may keep partners (or for a while siblings) who share a territory from competing too much for resources.

When I  watch Gila Woodpeckers, our most common Picidae,  and I notice the very distinct flight pattern, choice of perch, pose while sitting, their noisy calls, and I can imagine that a hunter may consider them as a  prey group as distinct as 'small rodent', 'small bird', 'lizard', 'snake' etc. and specialize on them.

I love our noisy agile drummers. I hope they will not be decimated too much!  While we had breakfast on the patio, there was another attack from a small Cooper's Hawk, this time wreaking havoc among Quail, doves and our dogs while he was chasing a Curvebilled Thrasher. He was unsuccessful and landed quite close to our table to take an extended brake. I'm pretty sure the he wasn't the Gila hunter, who should have been still full of his earlier meal, but a sibling (is clutch-mate a word?) 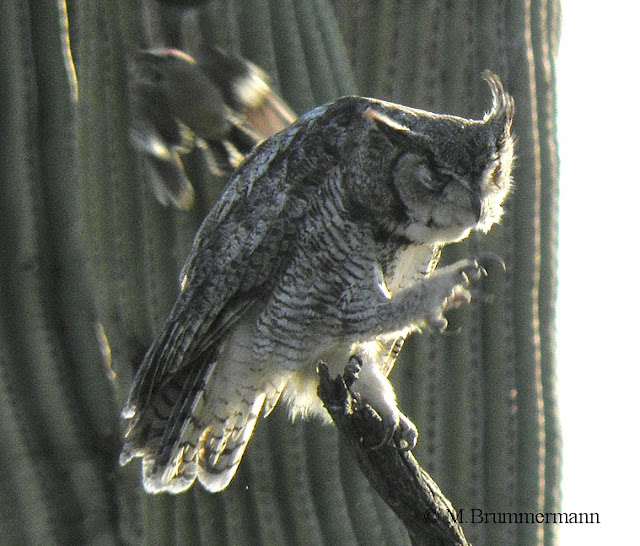 Luckily, Gila Woodpeckers are not always helpless victims. During the breeding season I saw heroic parents take on our top predator, the Great Horned Owl, who came to close to the saguaro hole with its chicks. The Owl did not stay long.
Posted by Margarethe Brummermann at 11:54 AM