It was searching for and finding bugs in the Palo Verde that is usually the perch of a pair of Gila Woodpeckers but those are busy raising a brood in a Saguaro right now.
I went outside, but the warbler was gone. Pyrrhuloxia and a Blackheaded Gross-beak in the blooming Ironwood instead. The pair of Kestrels is displaying and flirting above. In May? Did they loose their brood?  The dark Redtail female is faithfully guarding her nest with two or even three chicks

Rattlers are active day and night right now as the temperatures are creeping up towards three digits. Unfortunately, Bilbo got bitten and then went into hiding. We missed him and searched the neighborhood for hours, until he came finally limping up from the backyard, too late for effective antivenom. 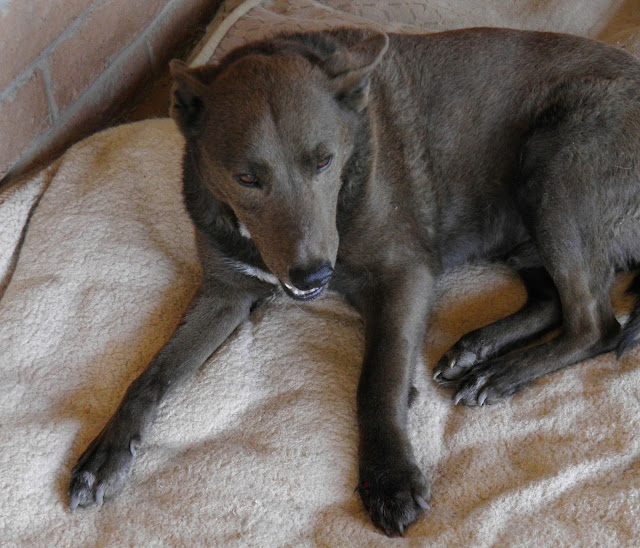 So he got antibiotics and pain pills instead. His paw was oozing and bloated and he touched no food for three days. Was drinking well though. Today he suddenly ravenously chewed down a rib bone from yesterday's dinner followed by a chicken breast. I think he's recovering well now, but still limping. He's been such a smart well trained dog for 12 years, always stayed well away from snakes. But we always had a snake-wise alpha dog o watch out for the others. Since first Cody and then Frodo died the snake barking and avoidance has been less reliable - we heard nothing at all when this happened.

Posted by Margarethe Brummermann at 7:26 PM