Or rather all corvids. They have been among my favorites wherever I lived. Konrad Lorenz and Bernd Heinrich did not have to plant the seed to this love, but they did nurture it in me through books and personal encounters.

Twice, as a child and young adult in Germany, I was lucky enough to become the keeper of a tame Jackdaw, which is the smallest of the black European corvids. Each was a  free flying companion for many years. Their intelligence and curiosity got them into many comical or even dangerous adventures - hiking or biking with Jackdaw never got boring.

When I lived in Trondheim, Norway, Crows became my favorites. Resident researchers soon invited me to  climb huge pine trees to get to the nests of rooks to get blood samples of the nestlings - I did not particularly like that idea. But I could watch for hours the behavior of those stately Hooded Crows that stood up to the biggest, loudest Hering Gulls with dignity. 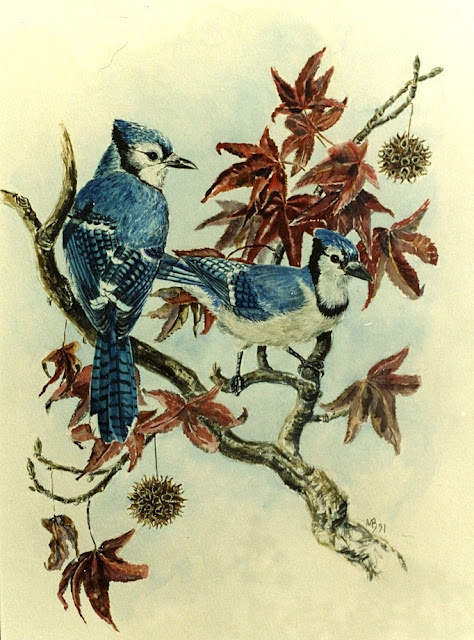 In Florida, the Blue Jays came to my balcony. Their antics helped through some inevitable homesickness. When I moved on half a year later, I sure missed those guys!

Their large cosmopolitan relative, the Common Raven, is the most intelligent and impressive. I love watching our resident pair here in the Arizona Desert. In Summer, they let  the vortex of a thunderhead cloud carry them up into the sky, only to swoop down with breathtaking speed and start it all over again. An amazing spectacle!
Posted by Margarethe Brummermann at 10:34 AM