Tuesday Sep. 6 2016. The remnants of hurricane Newton have reached Tucson. Not a leaf is moving, but steady rain has been falling all day. The washes are not running because it's all soaking in. Great! The Tucson mountains are hidden behind veils of falling rain and fog that's raising up from the warm desert floor. The dogs are wet and smelly and should stay outside, but there's a bobcat hiding up front under the big Ironwood Tree and young coyotes leave tracks in the mud along the fence - so Mecki gives alarm every few minutes. Tough. Time to write up last weekend's adventure:

A loosely organized group of Arizonans regularly visits Rancho el Aribabi in northern Sonora, Mexico. Naturalists and scientists, they are doing follow-up of projects that were started by the U.S. Forest  and Fish and Wildlife Service in conjunction with Mexican organizations, the Sky Island Alliance and of course the rancher who was our host.

The group regularly monitors  wildlife cameras that are positioned at water-holes and wildlife crossings all over the 10 000 hectare ranch about 30 mi south of Nogales. We stayed at a beautiful  ranch house surrounded by deep patios under arcades reminding of old mission buildings, full kitchen and many comfortable bed rooms.

Our Mexican hosts live in Magdalena, so I never met them. We were looking for biodiversity, but the diversity within the group was also impressive - ranging  from biologists to mathematicians and Egyptologists - it guaranteed interesting conversations throughout. All weekend, Cathy and Marianne spoiled us with their cooking. Everyone was very welcoming and let me join in their activities and also do my own nightly insect surveys.

With its riparian woodland, cienegas (wetlands), Saguaro rich lower slopes and high elevation mountain ranges - both dry and bare or covered in oak/juniper and thorn brush, the rancho offered an amazing variety of habitats.


I got a great overview over the immense stretches of land during a long bumpy trip along narrow, winding ridge roads to some of the cameras that overlook the upper cattle tanks. Thanks to the folks who brought their heavy duty 4 wheel drives with good truck tires. My Forrester would not have made it up there.

We saw only few cattle (there would be more during other seasons) and once a small heard of horses thundered by me on the narrow river path. Grazing overall seemed not very intensive, and  critical areas along the perennial stream were fenced to keep livestock out. The fences were part of a U.S. Fish and Wildlife Service project but are now maintained by the cowboys of the rancho. I spent the day time hours  mostly in the riparian  forest and the swampy meadows around the house. I can't call it hiking, because there was so much to see and photograph that my progress was extremely slow.

Bird calls with distinctly tropical accent and flashes of bright color were tantalizing, Yellow-billed Cuckoos and Sinaloa Wrens were common here, but I finally understood that I cannot follow all my passions at once, so I concentrated on the arthropods. 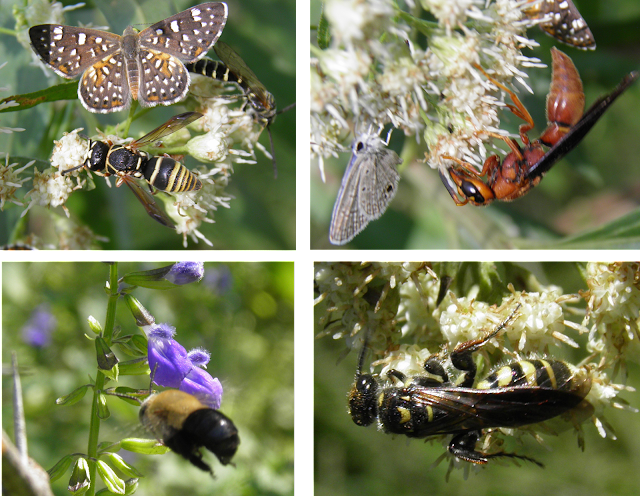 Even that proved difficult because I could have spent more than a weekend just trying to shoot just a few of those elusive Hymenopterans and Orthopterans that buzzed around seep-willow flowers and hopped through the lush grass. So I'm pretty certain that I saw a Mexican Blue-wing Grasshopper, but it got away.

My main interest was to photograph beetles. As expected, this close to the border most of the species were still the same as in AZ.  Always searching for specimens to photograph for the planned AZ Beetle Book, I was very excited to find examples of species that have been reported from AZ but are so rare that I had been searching for them for years. 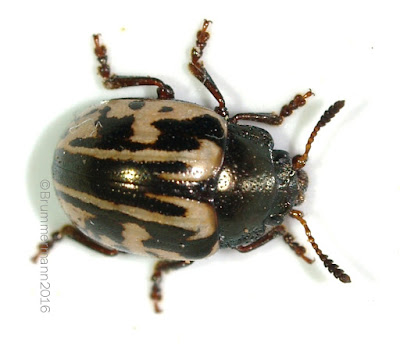 For example, on knee-high vegetation along the ranch road I finally spotted Leptinotarsa colinsi, the last species in the Potato Beetle genus that I still needed to photograph. That alone made the trip worthwhile.

A species of Banded Net-winged Beetles, found on leafy plants under the canopy of the riparian forest, seems to belong to the genus Calopteron. This genus has a mainly eastern distribution in the US.  Several characters resemble Calopteron reticulatum, except that the pronotum of the el Aribabi specimen is entirely orange, while in Texan specimens the middle of the pronotum is dark. 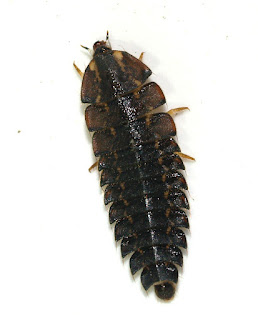 The nights were full of wonder, too.  Arial displays of Firefly males, nearly forgotten while living in Arizona, corresponded to the ground-bound blinking of females or larvae.

From under a piece of plywood on the back patio, Jim Rorabaugh pulled a Tailless Whipscorpion and a huge Scolopender.
On Saturday night, we visited the nearby village. There the entire population including the village dogs was on their way to a great outdoor fiesta with barbecue and life music. Maybe it was a wedding, because  one side of the plaza was taken up by an arbor made of hundreds of blue and white balloons. 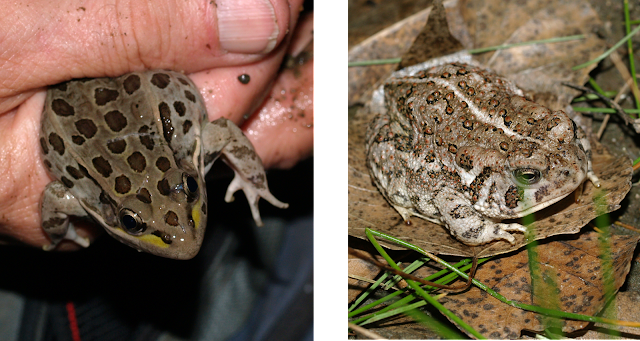 The fiesta looked quite inviting, but we headed for the creek that crossed under the main road, looking for frogs and toads. Indeed, a few Low-land Leopard Frogs and Woodhouse Toads paddled in the  fast flowing, clear water that was shallow enough to walk in, at least if you had no plans to dance at the fiesta afterwards. 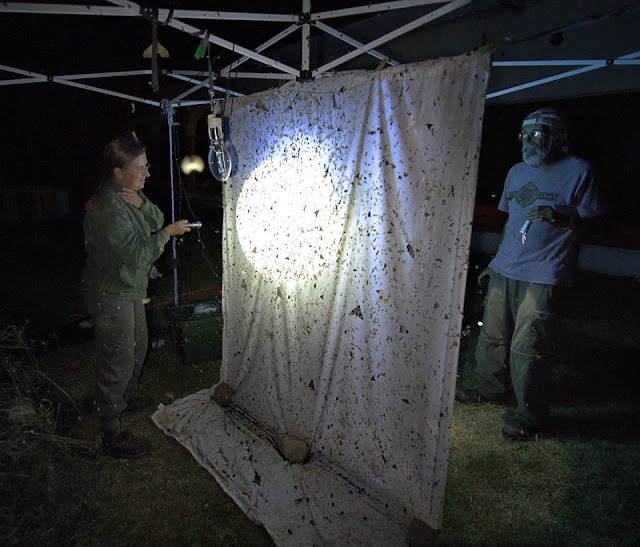 My black-lighting sheet was up both nights. The response was enormous, not only from all those insects  coming in in better numbers than I had seen all year, but also from people, some of whom were amazed and interested, while others found this multitude of bugs quite overwhelming.

To our human senses, most parameters were similar between the two nights. Location and moonphase were rather identical,  temperature, wind and humidity seemed similar and yet, the two nights produced rather different results.

Interestingly, the first night brought mainly beetles, among them many scarabs. To see beetle images and identifications please click here.

The the second night was richer in moths and water bugs, while the only beetles that showed up in numbers were blister beetles. To see most moth species with identification, go to my flickr album Moths of el Aribabi
Of the countless insects at the sheet I was able to photograph identify 17 Carabid species, 5 Clerids, 7 Cerambycids, 14 Chrysomelids, 15 Scarabaeids,  6 Tenebrionids (those are all beetles),  more than 50 species of  moths,  many True Bugs,  plus neuropterans, Dobsonflies, Caddisflies, earwigs and even one big Western Floodpains Cicada. For the moth ids, I relied on a very helpful group of Facebook friends. Special thanks to Randy Hardy and Paul John!
The lighted sheet also drew  a swarm of bats hunting in the night sky above. They live right under the patio beams of the casona. 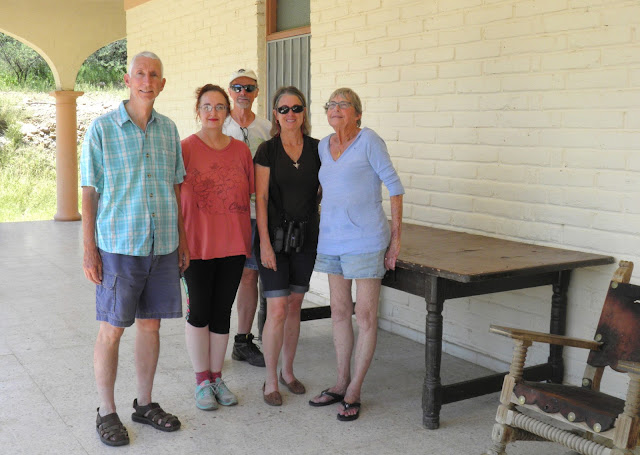 Overwhelmed by all that bug photography, I did not remember to take a group photo before we were all busy packing and two people had already left.


Posted by Margarethe Brummermann at 7:43 AM