Last Thursday I returned from cool, rainy Germany to the announcement of record breaking temps in Tucson. But mornings were beautiful and cacti set to flower were not deterred by a forecast of over 110 Fahrenheit. Their main pollination time is during night and early morning hours anyway. 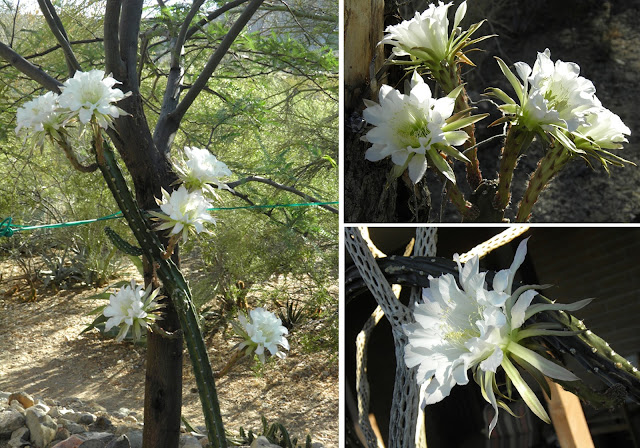 On Saturday, our Harrisia vines started the pageant. We raised the vines from seeds that I got from the Arizona Desert Museum. They come in a big red fruit - like a big plum - that contains thousands of seeds. They germinate easily. The vines are usually leaning into big mature trees. In our case they grew faster than the young mesquite that they accompany and we've had to protect the tree from their weight.

Potted Trichocereus plants glowed in deep reds and lively pinks but some flowers showed definite signs of heat stress from the day before. So I'm showing examples from shaded locations here. 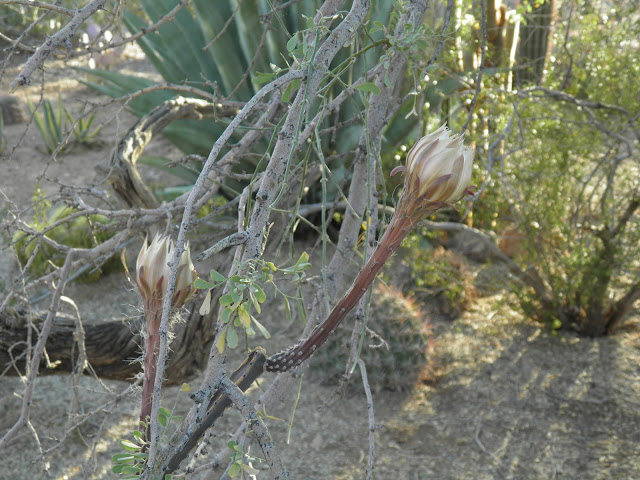 We have our own indicator Queen of the Night (native Peniocereus greggii) at the main entrance to the house under a big Ironwood tree. That plant helps us not to miss the one magical night of the blooming desert queens per year. Tohono Chul park also puts an announcement into the Arizona Daily Star at the same time, but we like our independence from mass media. Buds on our cactus had been huge for a while and on Saturday evening they were slowly opening. 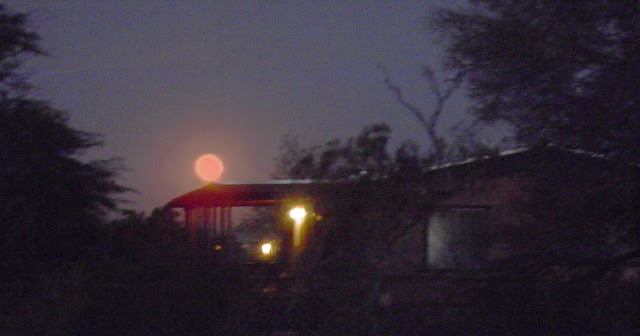 I called my photographer friends from the Gallery Gang and on Sunday Morning Doris Evans showed up just before dawn to search the State Land with me for the blooming queens.
This  morning, a strange 'blood moon' was looming over the desert but set before I could silhouette any queen flowers against it. Maybe a painting idea? 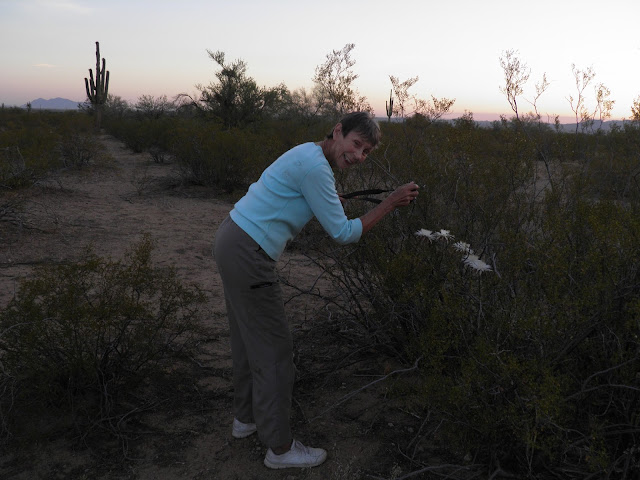 At twilight, we were able to see groups of flowers peaking all over out of the creosote cover of the State Land. Our noses also helped: the fragrance of these moth flowers is strong, sweet, and quite unique. 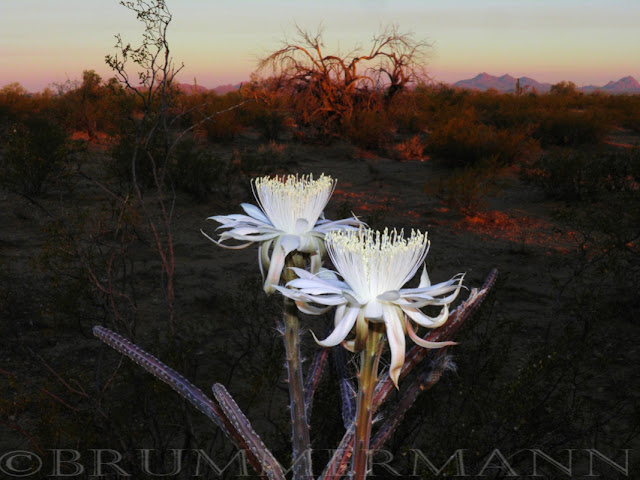 As photographers we faced the dilemma to flash or not to flash. Each effect can be interesting. But Randy points out that in this shot the brightly illuminated flowers nearly look photoshopped. 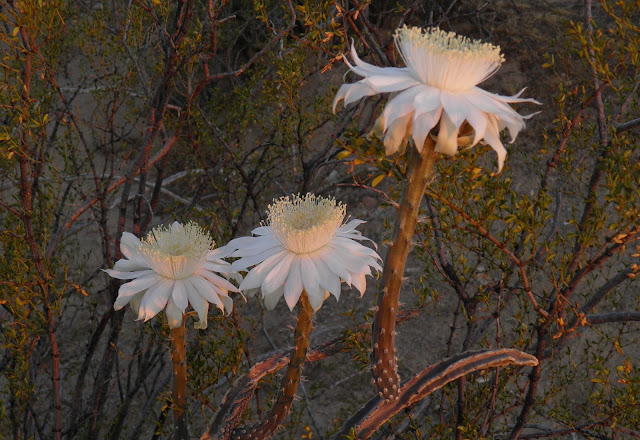 We were wondering if the thin branches of Peniocereus greggii usually lean into the protection of creosote bushes - it's possible, because during its dormant time the cactus becomes nearly invisible there.  I did notice how several year of  cattle grazing intensified the pressure: free-standing plants existed before the cattle were brought in, but are mostly gone by now. 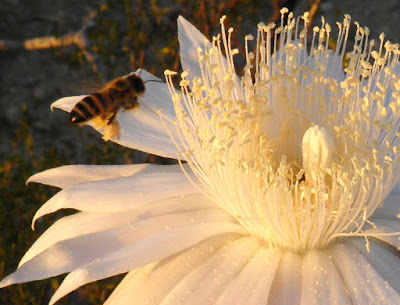 The rising sun brought warmer colors and also a new group of pollinators: Honey Bees flew back and forth loaded with the whitish cactus pollen. 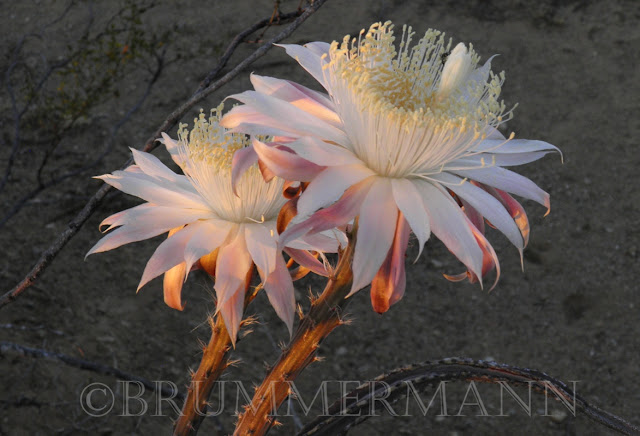 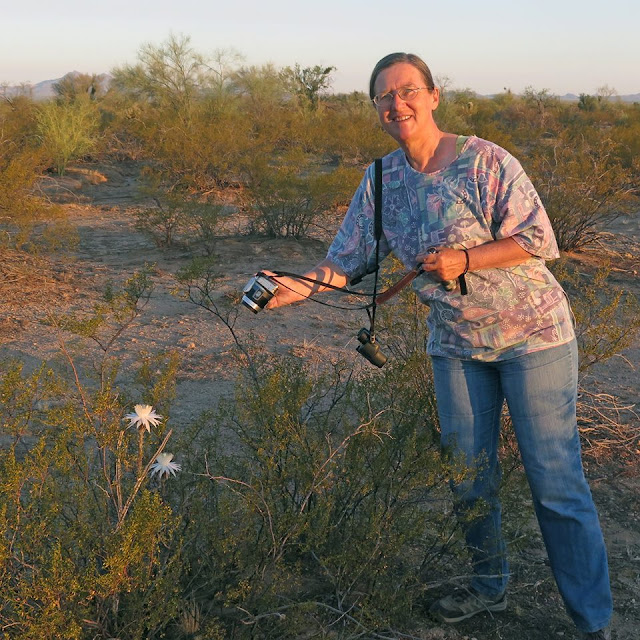 We found probably more than a dozen plants that were new to me, some great producers from last year seemed to be taking a break, and if we had stayed out longer, we could have found many more. On Monday morning, yet another species of white-blooming columnar cacti that is imported and builds great clusters here continued the feast for the eyes.
Posted by Margarethe Brummermann at 9:54 AM