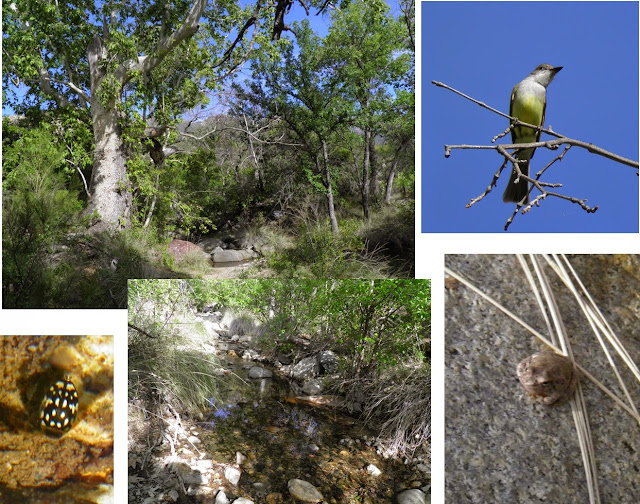 Madera creek is gurgling, Canyon Tree Frogs are croaking, dusky capped Flycatchers are adding their soft whistle and the Cottonwood trees at Proctor Road at Madera Canyon are lush with fresh leaves. The scene rinds me of our excursion to a sky island in Sonora Mexico last spring. There I learned about aphids in leaf-stem galls of cottonwoods, so now I'm actively looking for them. Sure enough, there they are. 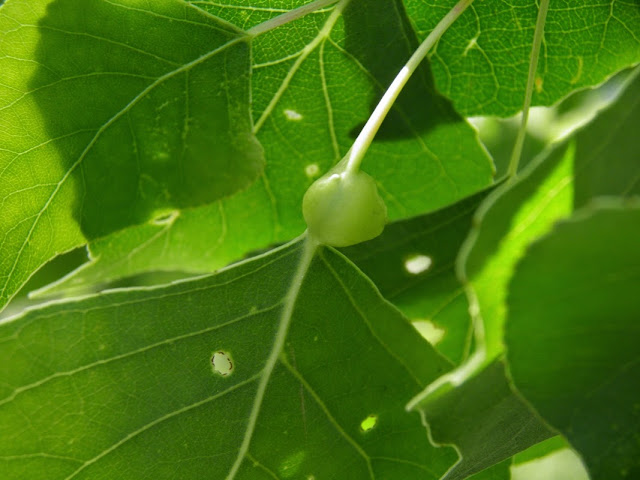 Many galls that I find on oaks contain only a single eggs/larvae of a wasp or fly. These galls on cottonwood leaf-stems (petiole) contain a big group of petiolegall aphids, and maybe more than one generation. 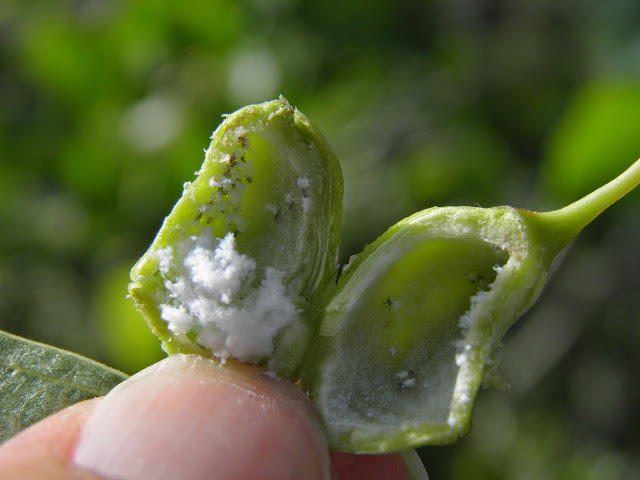 A forest service web page helps to understand what my photo shows. the following is a mix of quotations and my own interpretation:
Eggs are laid in fall in bark cracks on Aspen and Cottonwoods. In spring,when new, young leaves appear, eggs hatch into nymphs.  The nymphs feed on developing leaf petioles through their tubular, sucking mouthparts. Feeding induces the host plant to produce a swollen growth, called a gall. The gall completely envelops the developing aphid ( should this be plural or does every nymph get her own?). 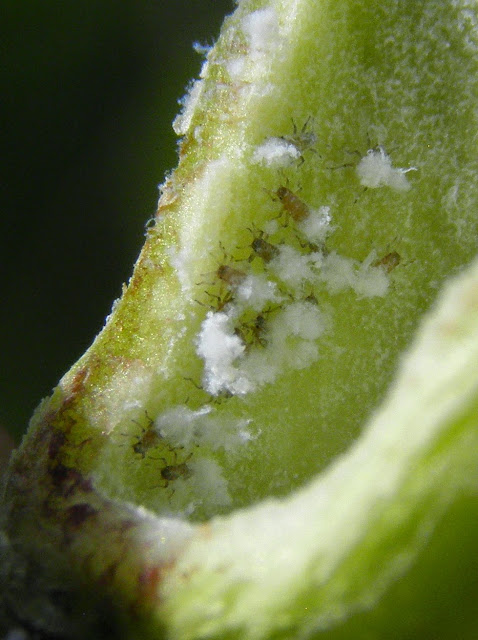 'The aphids are pale green with a dark thorax, and covered with a waxy substance'. (Actually, the cavity was nearly filled with that stuff, I removed some to make the aphids visible. They have
short, thread-like antennae and lack the terminal abdominal tubules, the characteristic aphid cornicles. Usually excess sugary fluid is expelled through the cornicles: Honey dew. Inside a gall, this seems not possible. So are the aphids producing the waxy substance instead? It seemed attached to/expelled by those cornicles.
Judging by their size of the aphids I found yesterday I'd say they were still nymphs. They will grow into wingless, asexually reproducing females. These will produce a new generation that will stay within the gall until full-grown. Those new females will have wings. During late June and July the galls will split open, and the winged adults will fly to their summer hosts:
Plants in the cabbage family. They settle underground on the roots of those herbaceous plants. Several asexual female generations may be produced on the summer host, all living in wax covered colonies. At the end of summer, winged adults emerge and fly back to their winter hosts, the Cottonwood trees, where they give birth to small, mouthless males and females that mate, and then the males die. After mating, each female, which is less than 1/25 inch (1 mm) long, lays one egg that is almost as large as she is into the bark of the host tree and now the cycle is ready to start over.
Posted by Margarethe Brummermann at 11:12 AM