The Ant and the Caterpillar

In Costa Rica I watched Bullhorn Ants living in close association with their acacia. The ants live in the huge hollow thorns of the tree and in addition to housing the tree offers all kinds of incentives to the ants, who in turn defend the Acacia against 'pests' like caterpillars that would love to chew on those beautiful feathery leaves. If you lean too closely into the tree those ants get ready to attack even a camera or a human hand. Vicious Pseudomyrmex ferruginea.
I had great photos and lost them all to a computer bug that was even more vicious. 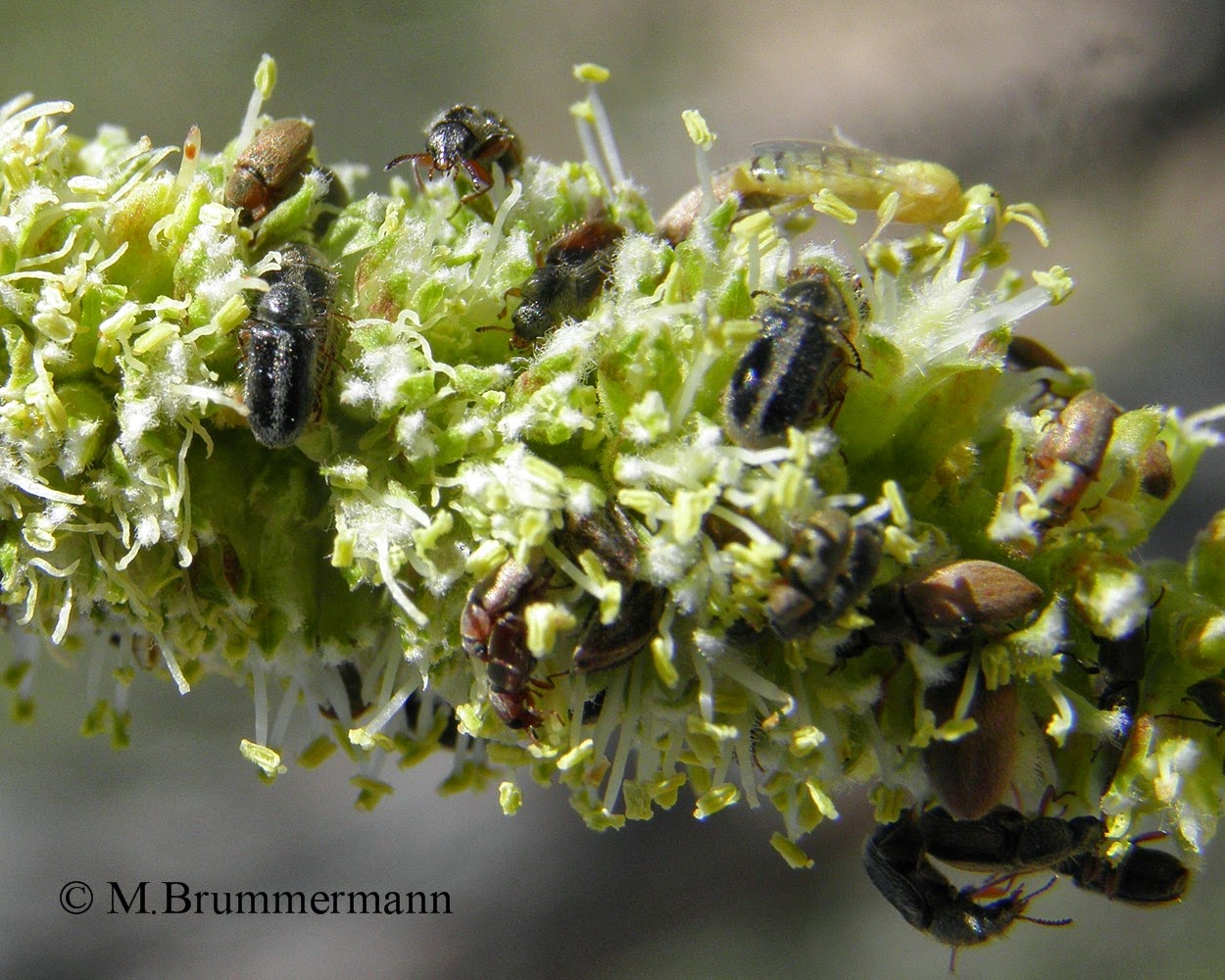 When the Velvet Mesquite is in bloom on the state land in Picture Rocks, Arizona, I spend a lot of time staring at the catkins. They are full of insect life, but most of it is both cryptic and tiny, including our smallest bees with the nice name Perdita, the lost one. To find one check the top of the catkin  in the right half of the picture above.

Today I saw an ant that was rather large and obvious by comparison. Its slim build and large eyes let me think of Pseudomyrmex apache that I had beaten off mesquite trees in Madera Canyon before. Drawn in by the ant I discovered two cryptic caterpillars of a Lycaenid Butterfly, probably a Marine Blue. They were sitting just as quietly as these guys usually are. Hard to tell if they were feeding or simply resting. The catkin was past its prime and probably not much of a resource anymore and the caterpillars big enough to pupate soon. The ant was standing above one of them, sometimes bobbing up and down, but mostly just excitedly trilling its antennae at the caterpillar.

Ants communicate with each other in this way, but I have also seen them 'talk' to other insects that serve them as honey-dew-cattle. Crematogaster (Acrobat Ants) can often be seen stroking Aphids or Leaf hoppers with their antennae. Those hemipterans suck fluid from the phloem of plants and eliminate the surplus as honey dew. Ants are crazy for sweets and tend and defend their hemipterans facefully. 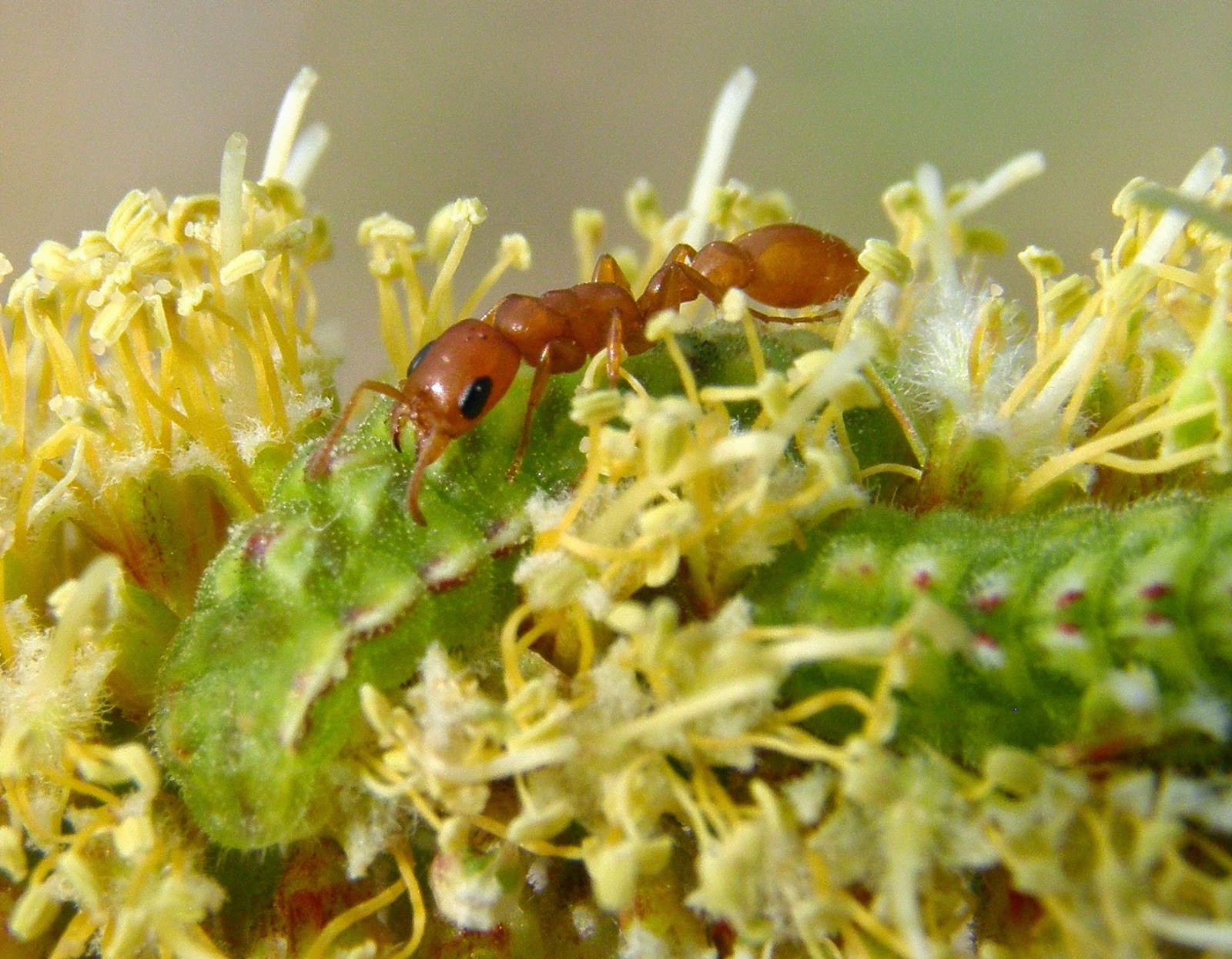 But caterpillars? Dave Wagner states in his book Caterpillars of Eastern North America: 'It turns out that nearly half the worlds 5500 lycaenid species (blues, coppers, hairstreaks) is tended by ants. In some species the association is so tight that the ants even carry the caterpillars to and from their nests' (where some species turn into brood parasites) and back to the feedings site on the proper host plants. The caterpillars of ant tended species have dorsal nectar glands on the 7th abdominal segment. From those, they periodically release a sugary substance. Most feed on flowers or fruit so they have access to excess sugar. The caterpillars can even call for the ants by vibration, but I got the impression that my ant was also trying to stimulate the caterpillar. If predators attack the caterpillar the ants will probably defend it, but I think in the most primitive form of this symbiosis the caterpillar is simply paying off the ants who otherwise might be the most dangerous predators themselves. The six legged mafia.
I saw the ant leave a couple of times and climb deeper into the tree. Pseudomyrmex are arboreal ants so the nest was probably inside a hole of a tree branch. Even though it was close to sunset and the wind was gusting, again and again there was an ant sitting on the caterpillars. I never saw more than one, perhaps always the same individual.
To me it was a surprise that an ant of the same genus as the tree-garding Bull-horn Ants of Costa Rica would be in a close relationship with caterpillars in Arizona.

To see a video of the ant with the caterpillars. Please click! 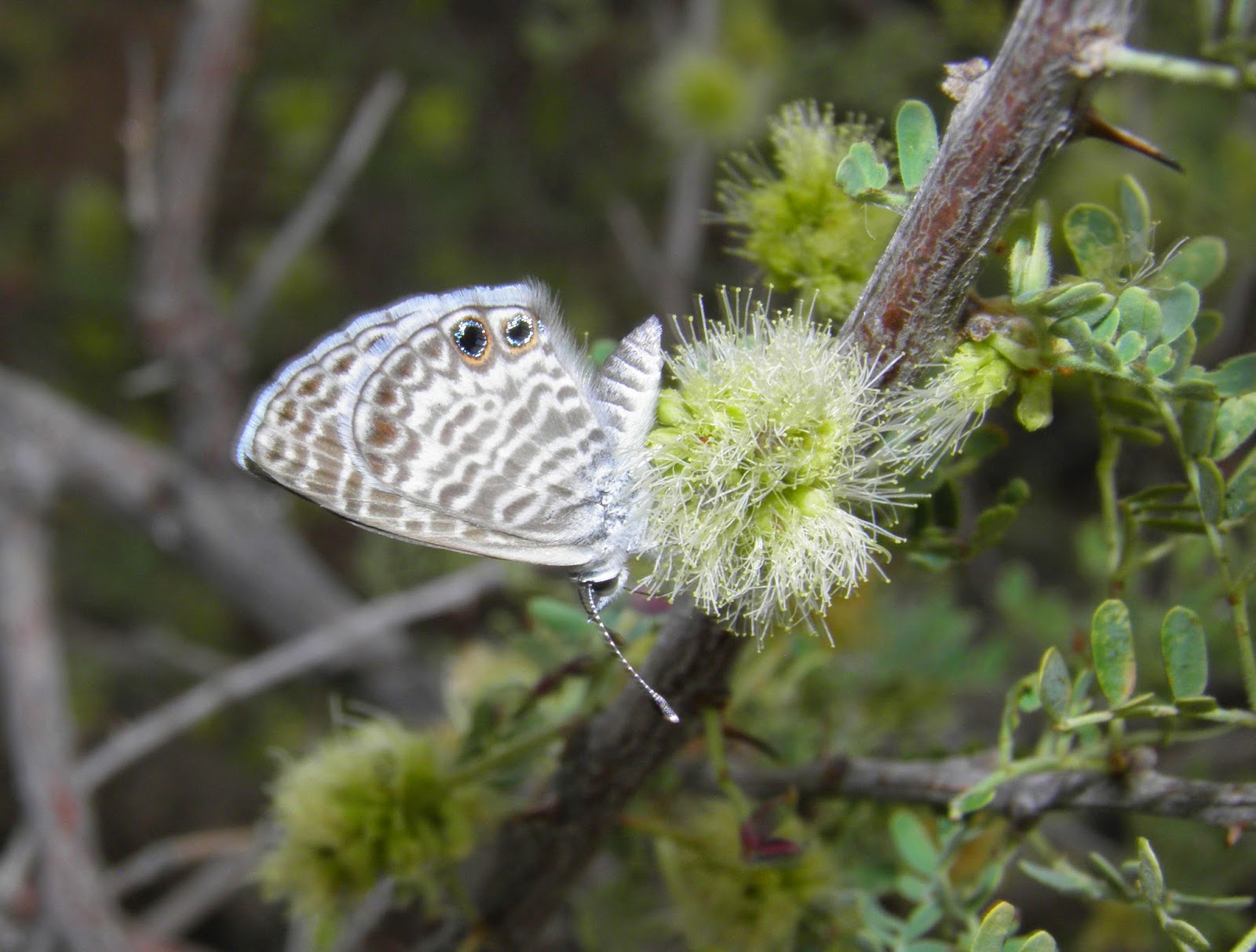 A nearby Catclaw Acacia was still in full bloom and females of Marine Blues were depositing their eggs. I assume that my caterpillars are of the same species.

Posted by Margarethe Brummermann at 10:40 PM