Today's not my day. Among the things that went wrong were the broken dog fence (Randy's problem but I feel for him), a Prairie Falcon that sent me racing for binoculars and then took off just as I got them, and then I got nailed by something.
I had let some black cloth dry over night on the wall along the driveway. When I picked it up I first thought it had given me and electric shock. It's often so dry here that static accumulates and one can get hit quite unpleasantly by those discharges. But this was way to strong a sensation and then also began to hurt a little like a bee sting. Since it was on my finger, my first reaction was to try and suck out whatever had been injected.

By then I knew that I hadn't felt anything quite like this before, so I began to carefully search the cloth. Sure enough, a scorpion was still hiding among the folds. Good that I brought my camera to shoot the falcon: now I took some booking portraits of my assailant.  He actually got away because I had no container. Next I posted the photos to the fb page of my friend and scorpion authority Warren Savary. If it turns out to be a scorpion sp. with a deadly poison - there aren't any described for Arizona, so it would be new to science - at least there will be proper documentation.
The pain is completely gone by now, but I can't quite decide whether my left hand is tingling or numb. Maybe both. All over I'm feeling a little shaky and like a migraine is coming on.
My lips and tongue are feeling like I'd be getting over local anesthesia from a dental appointment (good reminder - get a check-up before the art season starts and I get too busy!) And of course now I don't know whether this is a systemic reaction or if I brought that upon myself by sucking the stuff out. 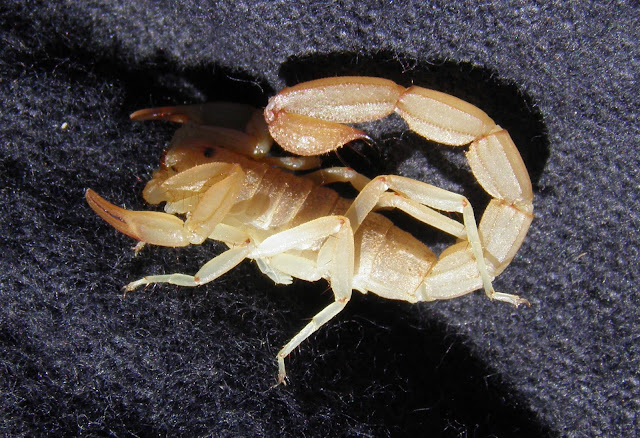 But now, after half an hour, the tingling numbness has reached my right hand, so I'd say it is systemic. I'm slightly nauseated and beginning to sweat but my heart rate is a normal resting 78 per minute. The initial adrenalin boost has definitely worn off by now.
45 minutes after the sting I'm feeling quite normal again, only my lower lip is still numb. But then  Randy wants me to read some very garbled text that he has to edit. It's written by a not-English-speaking scientist (no me!) in English, and after reading I go right back to feeling confused, disoriented and nauseated. But I don't think the scorpion has anything to do with it. Poor Randy. He'll spend all day with those 30 pages.
I have to admit, 2 h after the sting I now have a slight headache an hot flashes. Hm. Need a control experiment volunteer (a group, actually) and better air conditioning.
I took an aspirin and a half hour nap and woke up feeling completely normal.
Warren identified the scorpion as one of our larger, most harmless species Hoffmannius confusus.
Posted by Margarethe Brummermann at 11:43 AM