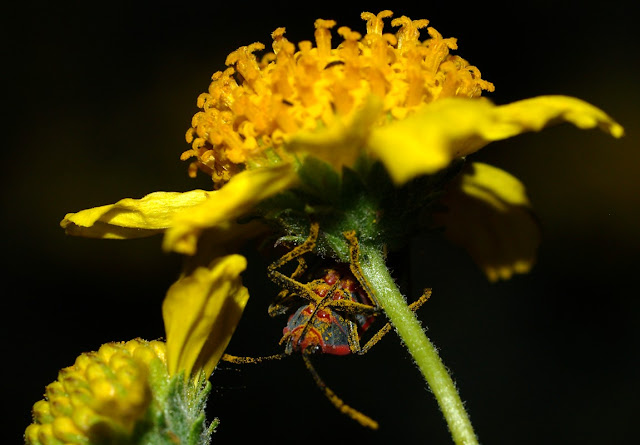 Last night I found a Large Milkweed Bug, (Oncopeltus fasciatus), asleep on the underside of a Brittlebush (Encelia farinosa) flower. Nothing special in itself. There were beetles, spiders, flies, male sand wasps, aphids....all tucked under the umbrellas of those little sunflower cousins. 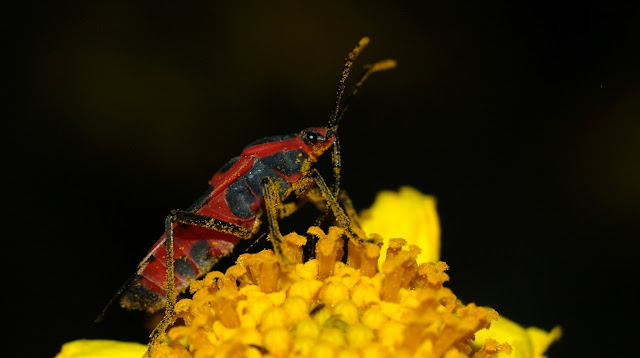 But I noticed that underside, legs and even antennae of the seedbug were covered in yellow pollen. Did the sticky stuff just get on him because of his choice of bed? True bugs (Heteroptera), with few exceptions, are not considered good pollinators even if they hang out on flowers. They are usually there to hunt if they are predators, or suck juices from the plant tissue.  So the invitation to pollinate, extended by the plant in form of nectar and extra pollen to draw insects to its reproductive organs, is usually lost on true bugs. Or so I thought. 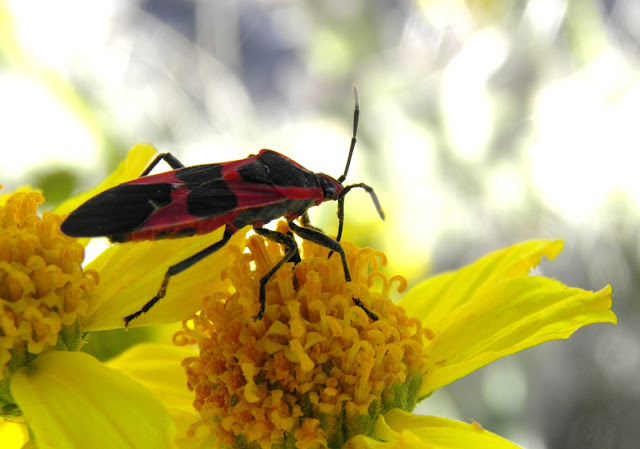 This morning the brightly colored seedbug was still around, this time on the flower surface. A brittlebush flower, like a sunflower, is really an inflorescence that is composed of hundreds of single florets, each with a complete set of stamens, pistil and nectaries surrounded by the fused, tubular corolla. So what looks like a simple, easily accessible disk flower can really only be exploited by insects with adequate elongate mouth parts. Of course, bugs do have a long thin proboscis. 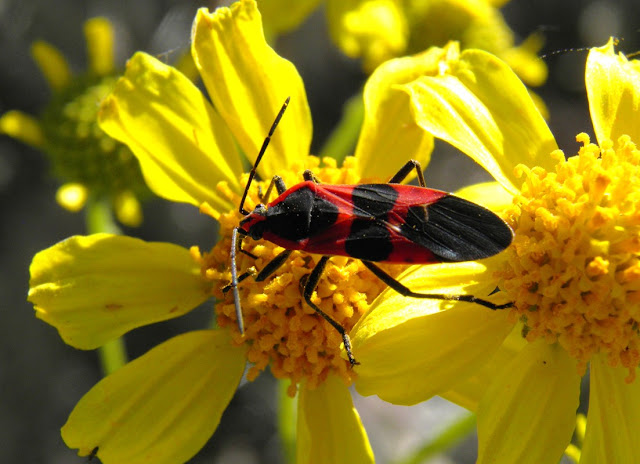 I watched the Large Milkweed Bug walk from floret to floret, sticking this proboscis into everyone, just like a bee of butterfly would. I even took a video. The bug was clearly going for the nectar deep in the florets and while doing so got powdered all over with pollen. I watched him visit several compound florescences. Does that make him an effective pollinator? Probably about as much as any butterfly, if not quite as good as a hairy, dedicated bee.
It's nice to see something unexpected right in my backyard in the early morning. I love my patch of brittlebush.

Posted by Margarethe Brummermann at 11:48 AM