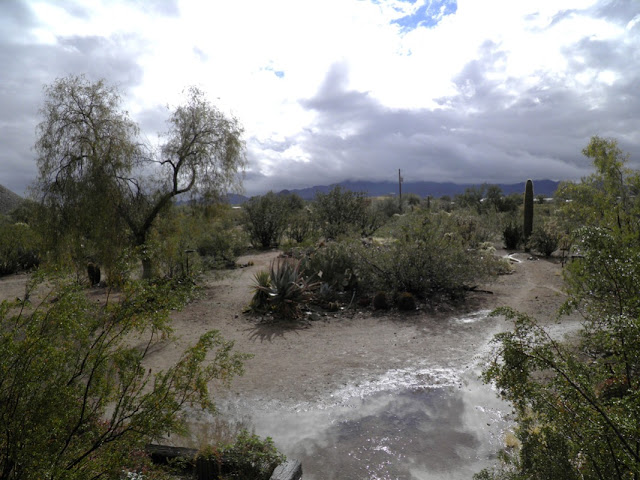 Rain! Cultures have many words for the things that are important to them. Here in the desert that has always been rain. I don't know many words of the Tohono O'odam language, but I do know that they call the violent downpours of the summer monsoon male rain and the soft drizzle of the winter month is female rain. The monsoon can be more destructive than beneficial and the winter rain should be rich and nurturing. Historically, December used to be the month with the highest precipitation.  I remember years of heavy flooding in March in the early nineties. But for the last seven or eight years we often waited in vain for our winter rains. 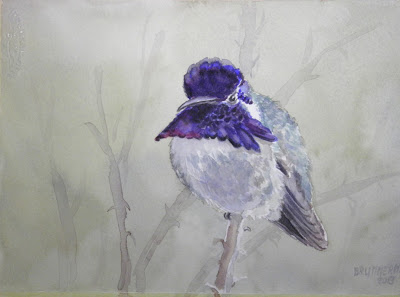 So today we felt very content to see clouds roll in from south and west, obscuring Wassem Peak and Kit Peak, rain drumming on the roof and blowing into the patio. I planned on a day of peaceful painting - finishing the Costa's Hummer sketch  above and starting something new...

But it wasn't going to be. Yesterday we had found cattle tracks on the grounds and discovered that an earlier rain had washed out the ground under the fence, so small cows could walk through. The wire of the electric dog fence is broken, too. Around noon today I heard the dogs barking in the neighboring quarry as if they had treed a big cat (at least I think it would sound like that, it has never happened so far). I got worried and crawled through the quarry fence to follow them. Of course, my appearance gave them just the momentum and confidence they needed to dislodge not a cat but some big javelinas that they had driven from our land into the lower part of our lone Twin Peak (its twin was mined away by Portland Cement). As I was watching, a line of seven adult javelinas emerged from the rocks. They moved somewhat stately and slowly, but the dogs were in mad pursuit. Eventually they scattered most of the herd.

One big guy stayed behind between me (with Laika) and the action. His hackles were up, nearly doubling his size, he was grunting and showing me his widest side. The dogs cornered some of the other Javelinas at the quarry tailings. Now I had to worry about rock avalanches in addition to javelina teeth.  It took nearly an hour until, with Randy's help, all three male dogs were back on leashes. They were exhausted and dirty but had only some scrapes on legs and faces - nothing that looked like a javelina bite. This was lucky because the pig-like javelinas or peccaries have huge teeth and their bites leave deep holes in legs and bellies of dogs - we've had some injuries before.

Posted by Margarethe Brummermann at 6:24 PM