Sycamore Canyon in the Atascosa Highlands of southern Arizona is one of my favorite places in late summer. And because it's so beautiful and interesting it wasn't very difficult to get Richard Hoyer, naturalist par excellence and Senior Leader for WINGS, Inc. to join me on this expedition. As usual, we had a hard time reaching our final destination, because Sycamore Canyon lies at the end of the beautiful and extremely critter-rich Ruby Road and we had to stop every half mile or so.


From below Pena Blanca Lake all the way to the higher elevations of Sycamore Canyon the road sides were alive with butterflies, grasshoppers, leaf beetles, buprestids and all the predators that these vegetarians attract.

We kept stopping for interesting flowers in side canyons and on sun exposed slopes of the dirt road part of Ruby Road. At one point, a Golden Eagle circled low.

I had a request from Dave Wagner to collect Datana caterpillars that feed on Manzanita. Rich knew exactly where to look so we found several clutches of the brightly colored guys.  They seem to stay together in protective groups. Their defensive pose reminds strongly of that of very poisonous sawfly larvae.

As I am writing this,  the caterpillars already arrived at the University of Connecticut. It turned out that I had inadvertently included another interesting species, a slug caterpillar. You can easily see why we missed it.


We found Sycamore Canyon  quite changed by heavy floods. Those early monsoon storms sent enough water through the narrows to pile up big cottonwood trunks and rip deep-routed willows from the banks. Now it was green and lush, smelled of decay, and was extremely muggy.

Horse Lubbers were everywhere, many of them with very light markings and nearly yellow heads. The constant buzz of mosquitoes reminded me that chiggers were probably lurking, too. I rarely use insect repellent in Arizona, but this summer I'm going through a can rather quickly.

Shortly after we arrived, dark clouds pushed over the mountains and thunder grumbled. We convinced ourselves that the storm was moving around us and that we were uphill from any rainfall. Still, we soon climbed out of the canyon.

Most rocks were lichen covered and the ideal habitat for the cryptic Lichen Grasshopper. We found countless grasshoppers of many other species instead. Maybe the lichen hopper is an early summer species. For the first time I saw a Cactus Longhorn Beetle on a cactus that isn't part of the Opuntia/Cylindropuntia Group, on a  Rainbow Hedgehog. But no chew-marks yet.

Eventually the storm did come at us -  we just barely made it back to the truck when it began to pour. The curvy dirt road was wet, but not slick and the washes were running but not yet deep when we rushed to get down the mountain.
The heavy rainfall was rather local, so down at Pena Blanca Canyon it was still dry and warm enough to set up the black lights. Before it got dark, Rich imitated the call of a Whiskered Screech Owl. I had witnessed that spectacle before: all kinds of small birds mobbing him and eventually even an owl coming to meet him. But the numbers and the variety of birds at Pena Blanca was still amazing. There were Summer Tanagers, Bridled Titmice, Anna's Hummers, several Flycatcher spp., White-breasted Nuthatches,  several spp. of Warblers, painted Redstarts, Black-headed Grosbeaks, a very pretty Varied Bunting, Lesser Goldfinches, Gnat Catchers -- all of them close enough to make me wish I had traded in my trusted old Leitz binoculars for a modern pair with closer focus.

I am still new enough to moth-watching that every black-lighting event brings me something new and exciting, even though the big impressive moths seem to be gone now. I also found a couple of new Cerambycids. 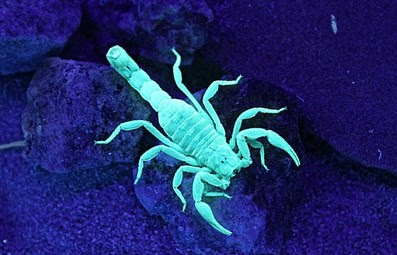 Rich had brought a UV flashlight to look for scorpions. Scorpions reflect uv-light radiantly in purple or green. He wasn't disappointed and he also found another Arachnid, a spider surrounded by bright luminescence that was coming from the egg sack that she was guarding.

Juvenile amphibians were slipping through the grass everywhere. A nice green frog turned out to be the rare, endangered Chiricahua Leopard Frog. We also found an adult Narrow-mouth Plains Toad. I have seen that species only once before, also at Pena Blanca. It may not be as rare as the Leopard Frog, but its life style is much more secretive.

I hope the amphibians didn't meet this guy - he's able to catch prey as big as a mouse. His bite is also very painful to humans and he's very quick. Some don't believe that, as Rich is demonstrating. 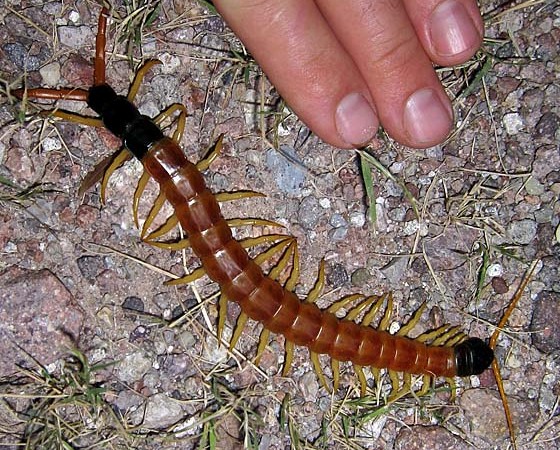 Posted by Margarethe Brummermann at 10:10 AM