The citizens of the little town of Patagonia in Santa Cruz County, Arizona, maintain a beautiful butterfly garden and a lush community garden with vegetables. We never fail to visit there on our insect field trips. 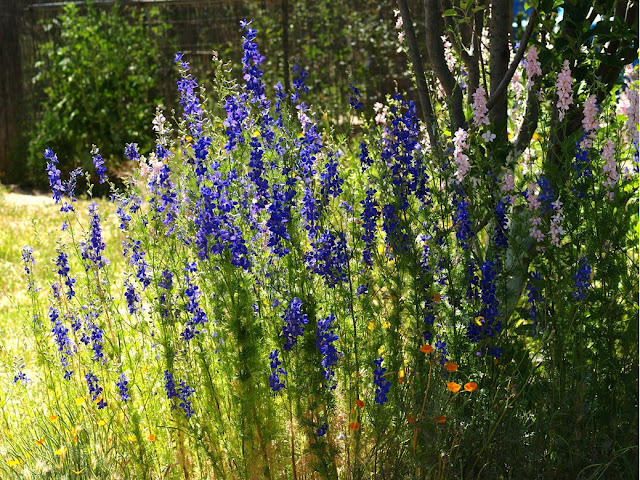 These gardens seem to be kept under a strictly organic regimen. While this keeps the produce healthy and delicious, it comes of course with some trade-offs for the gardeners and bonus points for the entomologists.

One gardener philosophically watched his cobs of sweet corn disappear into the stomachs of countless juvenile Differential Grasshoppers. Smartly, he had planted his plots in three time intervals, and only one set of corn coincidet with the hungry hoppers, so next year he will just skip that planting date.

The Dill plants sported beautiful and undisturbed Black Swallowtails caterpillars of all ages.  These guys aren't shy. They flaunt their warning colors in front of all the hungry birds on those nearly bare branches - the must taste really awful.

The leafs of the annual sunflowers were eaten to shreds by the larvae of Zygogramma exclamtionis, the Sunflower Leaf Beetle.

Pigweed, maybe grown for use in salads at a younger age, was hopping with Amaranthus-feeding Flee Beetles. Some folk with 'Careless Weed' allergies may even like to see these guys at work.

﻿
Morning Glory leaves were punctured by the iridescent tortois beetles Deloyala lecontei. They were hatching from pupae and mating right away.


Tomatillo plants had all but disappeared under the onslaught of Lema daturaphila. The beetles seemed to be much more restrained on their name-giving host, the Sacred Datura.
﻿﻿
Bell Peppers were attacked by the blue relative of the Potato Beetle, Leptinotarsa haldemani, here  shown on a wild Nightshade.

For a keen observer, the full life-cycle of a the tortoise beetle Gratiana pallidula was displayed on the leaves of Egg Plants. All stages were very cryptic.

Bean leafs were skeletonized by bright yellow, spiny larvae which I first mistook for those of another tortois beetle. But because I hadn't seen this particular one before I collected some. They pupated, and out came - yellow Ladybugs. I know. They are supposed to be the gardener's little helpers and devour aphids and other pests. Not this species. The Mexican Bean Beetle is a Cocinnellid, but also a vegetarian and can become a pest of its own when he gets into big commercial bean growing areas. In the US, there is one more vegetarian Ladybug, also genus Epilachna, that feeds on the leaves of cucumbers, squash and related plants. 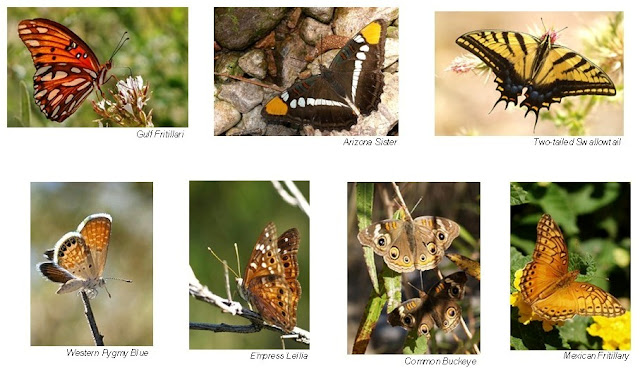 I met Fred an Mary Heath who were doing an annual butterfly species count and ecitedly noted that they had 90 species total in the Patagonia area, and 60 of those just in the gardens. There are no butterflies without caterpillars, and they need to feed on plants!

Visiting the Patagonia Community Garden reminded me of the difficulties and joys (if you come from the angle of a bug-lover or of an insectivorous bird) of organic gardening.
Yearly crop changes or under-plowing of left-over plant material could probably prevent a part of the infestations. But organic gardening faces more challenges  in Arizona  than for example in Germany. One reason is the lack of really cold winters that annually kill scores of insects in more northern climates.
But there is another factor that cannot be overlooked: The Americas are the original home of many cultivated crops. Potato, tomato, tobacco, corn (mais), sunflower, squash, many species of beans, all were first cultivated here thousands of years ago. The wild ancestors or relatives of those species are still all around us, and so are many of the insects that evolved with these plants as their hosts. Those were the ones that I found at work in the Patagonia garden.

In the sequel of this blog, I will discuss the advantages of gardening with locally derived plants as opposed to cultivating imported species.

Until then, here's a great article by one of my BugGuide Friends: http://nativeplantwildlifegarden.com/a-healthy-garden-is-a-buggy-garden/


Posted by Margarethe Brummermann at 12:06 PM