In our backyard, numerous colonies of ants build structures that look like mini volcanoes: cone shaped mounds that rise out of the sandy soil complete with central craters. At first steep and well-shaped, they soon get flattened by erosion. Some sit alone, others in groups of two or three. In spring, there is always activity around those mounds: workers carrying material into the entrance and disappearing with it in the dark depth, or dropping their loads on the outside of the mound, forming a ring of plant material around it.

I must admit that I lived surrounded by those ants for years before it dawned on me that there were two very different species at work and the differences are quite apparent.

At one type of colonies, the single minded efforts of a never ending procession of ants result in an accumulation of fresh green, purple or silver plant clippings that sit there for a day and then disappear into the crater (top right). These are the leaf-cutter ants that I will describe in a later blog.

The plant material circling the other type of colonies looks old and discarded. The ring around the mound seems to be the permanent waste midden of the colony (above, middle).
This is the work of the Smooth Harvester Ant Messor pergandei. In this and the following blog I will not describe the social structure of ant communities that both species have in common, but rather point out the most striking differences in the way of life in these two local crater-building species...

Messor pergandei ants are shiny, dark brown to black, the majority (workers) between 4 and 8 mm long. Their mounds are of modest height and usually around 20 to 30 cm wide. I find them in open, sandy areas, often along paths - there doesn't seem to be any particular requirement for shade or moisture and these ants can deal with very compacted soil.  The common name Harvester Ants refers to their striking behavior: workers are constantly carrying bits and pieces of plants to the mound, and they are choosing their material in a very organized way, clipping the heads of grasses when the seeds are fresh and juicy, switching to other seeds when those are in season....

In our desert surroundings a little plant in the Geranium family, Erodium cicutarium, also known as Redstem filaree, or Common Stork's-bill, is very common. It is an introduced, invasive Mediterranean species. Messor ants don't care. In early March, they prefer Filaree seeds over anything else. Filaree relies on ants for seed dispersal  (myrmecochory). As an incentive for the ants, a piece of sweet tissue (elaiosome) is firmly attached to each seed. The ants collect the diaspores (seeds plus elaiosomes) and carry them to their nests. 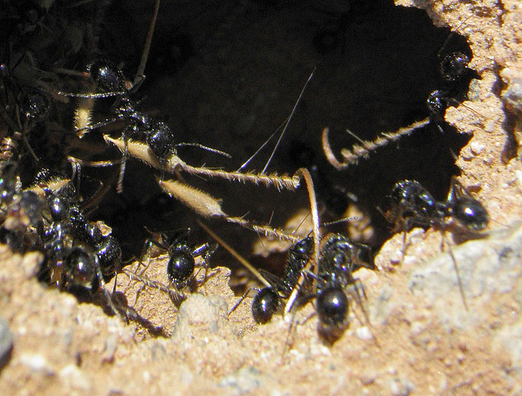 Workers were bringing seeds with their spiraled attachments from all over and carriwd them into the dark entrance hole of the colony. Other pieces that were brought up from the inside and then tossed over the crater's rim to end up on the colony midden. These are just the inedible parts, which include the intact seed. The sweet elaiosomes have been removed and  remain in the under-ground granaries of the colony. 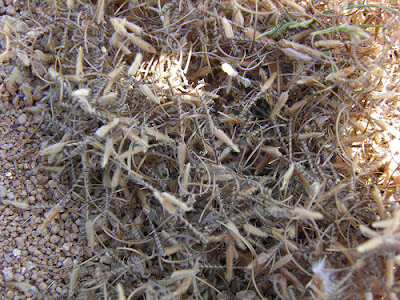 Messor ants like Erodium diaspores so much that most middens that I checked in March 2012 consisted of nothing else. This raises the question whether seed dispersal is actually achieved. While the seeds are removed from the mother plant, they still end up in dense piles, exposed to elements and rodents. If this is a glitch in the system, it's probably because Erodium and Messa really didn't co-evolve. I would like to observe the behavior of local ants in the Mediterranean home countries of the plant. But, alas, when I studied insects in Yugoslavia, Greece, and Italy, ants were not very high on my list. However, if the spread of Erodium in our backyard and the adjoining state land is any indication, it's a successful symbiosis, even here in Arizona.

The big colonies of Messor pergandei are very active right now. The ants become nearly invisible during our 'dry heat; times from May to the beginning of July when the first monsoon storms trigger the mating flights of thousands of winged males following the young aleate queens on their bridal flight. The emergence of so many insect often looks like rising smoke. That is the time when suddenly hundreds of dragonflies hunt over the dry desert and bats dance over our house at dusk.
Last year one of the queens shed her wings and wandered into my studio. When she was identified as a Harvester Ant I was apprehensive: my only experience had been with our other Harvester Ants in the genus
Pogonomyrmex, and that was the most painful insect encounter I can remember (and I have been attacked by fireants in Florida)

But there is no Pogonomyrmex colony close to our house.  Local Pogonomyrmex nests look like nothing else: a more or less bare spot of several square yards with paths radiating away from an entrance hole somewhere off-center. I push my pant legs into my socks when I'm around these places. Messor ants on the other hand are so unagressive that I don't even know whether they can sting even though I have been on hands and knees with my video camera at their nest sites quite often.

P.s. the Genus name Messor has been changed to Veromessor for the US species since I wrote this entry

Posted by Margarethe Brummermann at 11:05 AM