Two dry washes cut through our land and continue through the State Trust-land to the north. Before our rodeo loving neighbor started to run his roping cattle there, we walked our dogs nearly every morning along those arroyos. Even though they haven't had much running water in years due to drought and earth-moving activity in the nearby quarry, they are lined with trees. The tallest blue Palo Verdes and the widest Foothill Palo Verdes grow there. 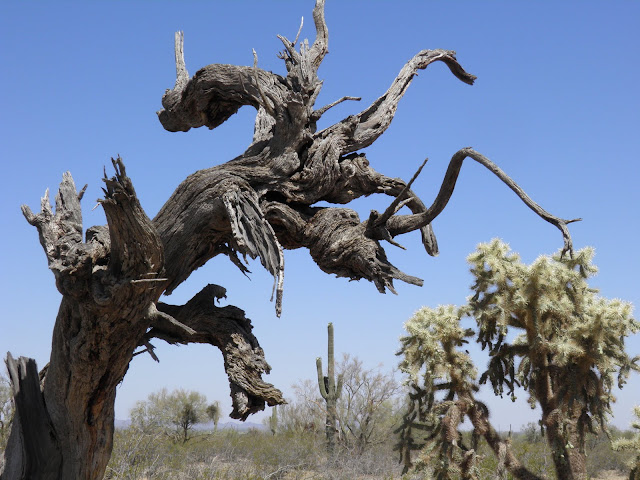 Ancient Ironwoods still bear the scars from the time when wood was cut  to make charcoal for limestone kilns that have long since disappeared. Even dead Ironwoods seem to last for ever. We use one grotesquely crippled one for orientation and call him Hieronimus after the Dutch painter of medieval horror visions.

Strange big-headed birds sleep motionless during the heat of the day in those strangely shaped trees. They melt into the shape of a branch with bark-colored feathers and by sitting along its direction rather than crosswise. Only when the dogs are running right underneath its hide-out, a bird flies up. Soundlessly like an owl, but gliding like a big slow swallow, zigzagging  close to the ground and never in a straight, predictable line the Night Hawk swoops away.

White markings close to the tip of the long pointed wings flash identify him as a Lesser rather than a Common Night Hawk. The bird lands on another low strung branch nearby and becomes invisible again. To photograph, I have to follow, but more often then not I loose the bird, until a dog accidentally flushes it again or maybe another one. 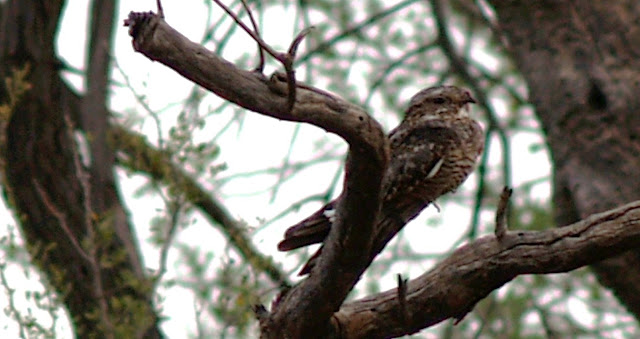 In the last hours before sunset the birds change from shapeless lumps into elegant long-winged, aerial acrobats with the shape of a small falcon but a much slower wing beat..

During the dry months of May and June the insectivorous predators have to undertake a daily journey from our arroyos on the west side of the Tucson Mountains to the Santa Cruz River about 10 miles to the north.
There they feed on dancing swarms of gnats and mosquitoes but also catch large moths. Their short, enormously wide beaks are surrounded by bristles that allow them to scoop up prey while erratically swooping close to the ground and over the water.

I was at the river at the Sanders Road Bridge in Marana yesterday. There must have been close to fifty Night Haws gliding right towards me  through gaps in the vegetation, low over the river, high in the velvety evening sky, holding their pointed wings in a slight v-shape, tipping from side to side, seeming to do acrobatic tricks. In the setting sun they kept changing from dark silhouettes to glowing beacons when they turned, their white wing bars flashing. They were  competing for insects with kingbirds and other flycatchers, several species of swallows and White-throated Swifts.


As the evening progressed, the other birds disappeared, leaving the air over the river to night hawks and bats. 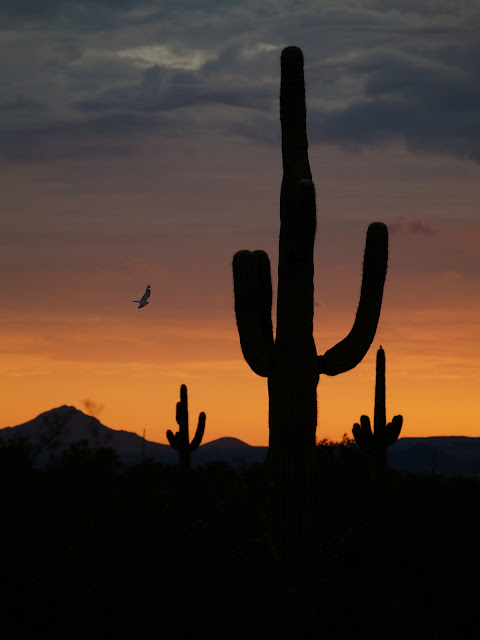 During the monsoon months the night hawks will stay closer to our house, feasting on swarms of termites and ants that, during their nuptial flights,  rise from the desert sand like smoke. On those evenings we will also hear the strange goat like sound produced by air rushing through the tail feathers of the night hawks during the aerial dives that are part of their mating display. This sound together  with their low to the ground flight gave their European relatives the reputation to swoop down on goats to steel milk -  hence the German name 'Ziegen Melker"
Posted by Margarethe Brummermann at 10:41 PM