Last Thursday I took a German scientist who is working at the Department of Neurophysiology at the U of A on a tour of our canyons to search for scutigeromorph centipedes. They are long-legged, night-active and, as it turned out, elusive. We have an endemic species here Dendrothereua homa (Arizona House Centipede), which I have seen, once, and supposedly also the introduced species Scutigera coleoptrata (House Centipede) that is more common in the eastern US where it lives in human dwellings. Here it would probably be able to live outdoors, maybe in pine forest like in the Mediterranean. But between Florida Canyon, Pima County, and Sycamore Canyon, Santa Cruz County,  all the creek beds with rocks and soil (leaf-litter) loose enough for these guys to maneuver in were so dry that we found very few creatures hiding under rocks and none of the ones we were looking for.


We did find a number of scorpions, though. Mostly Arizona Stripe Tails, but also a few Bark Scorpions and the one below that still awaits identification.

The toothy chelicera remind me of Dipocentrus spitzeri that Warren Savary once found on our trip to Peck Canyon. That's not far from Sycamore and the habitat seemed similar (I only saw it at night)

Of course we found ant nests,  disturbed a number of spiders that were hiding under rocks, and where it was moister, big groups of Bombardier Beetles were huddled together.


Twice I found a much larger Galerita mexicana, a False Bombardier Beetle, among them. I knew that this species may be mimicking those armed-with-explosives guys, but I didn't know that it actually hides among them...Too bad that all those carabids run so fast when uncovered - I didn't get a decent shot at them even though by then I had my camera always ready. 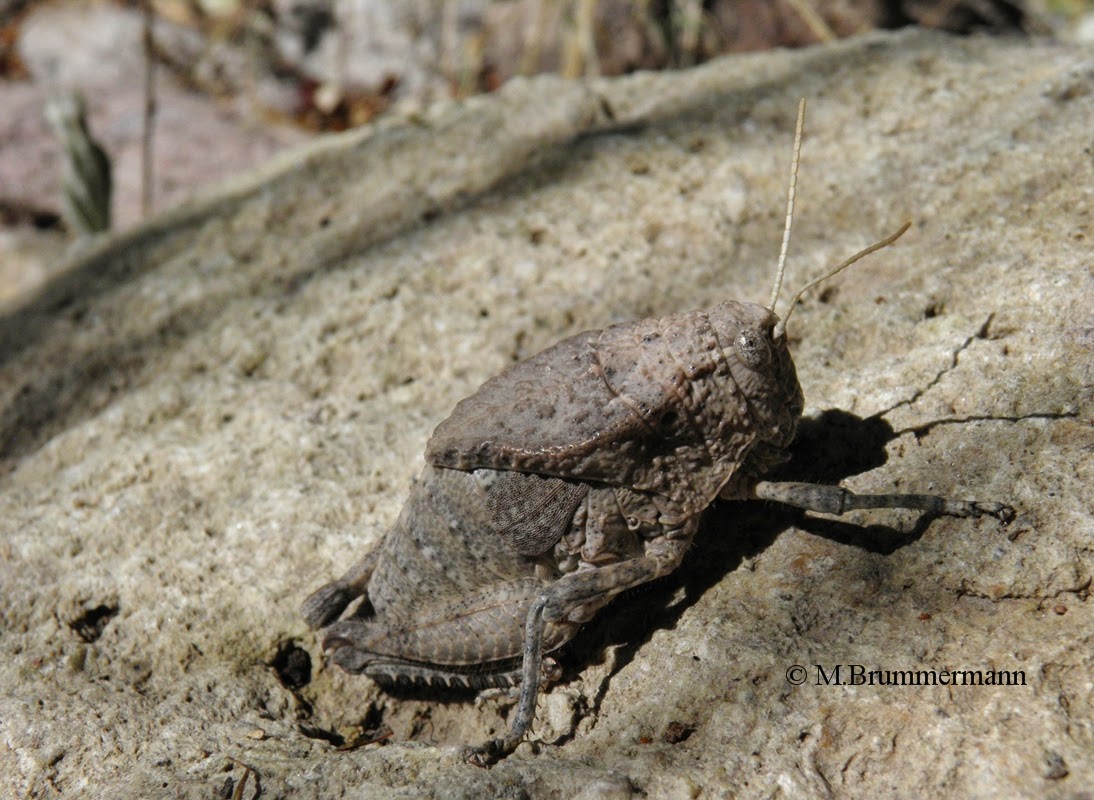 The female Chihuahuan Toad Lubber on the other hand was sitting still for as many photos as we wanted to take. My German companion asked which toad she might be mimicking. But toads here are mostlt night active, the grasshopper is day active.  She does look very similar to a Canyon Tree Frog, but most importantly, they both look like a rock. So I'd say that this is a case of convergent adaptation, not mimicry but simply camouflage.

We had started our trip in Tucson at 6 am because I was afraid that it would get too hot later in the day. The predictions were for temperatures in the triple digits. But all morning long the sky was overcast and grey and it stayed cool. During our short stop at Pena Blanca Lake it actually rained. Unheared of in May! Consequently, I left my camera in the car. Also unheared of.

Both lacking cameras, we found a great new (to me) reptile under the loose bark of a burned tree: it was 4 to 5 cm long (without tail), shiny-smooth and had cream colored stripes on a dark brown body. The most impressive feature was the strikingly electri-blue tail. And it posed perfectly on the smooth bark of the tree...

It very much resembled the juvenile Wester Skink in my field guide. But that species should be only in the NE corner of the state, and Pena Blanca is as far south as you can get in AZ. We met a couple of herpers later who said that there is an endemic species around Pena Blanca. Not in my field guide, though. 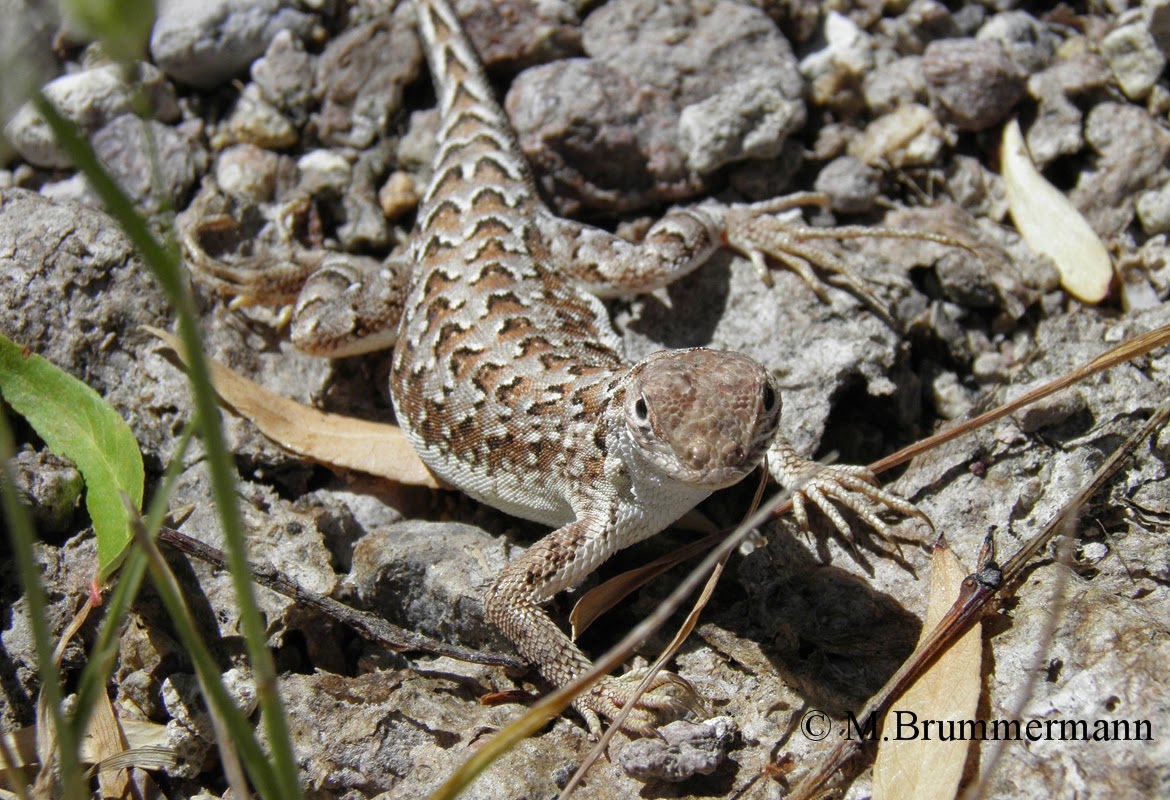 As soon as it got warmer around noon, many Elegant Earless Lizards showed up. His bobbing rhythm is an extremely fast nodding towards the intruder or the object of his desire. 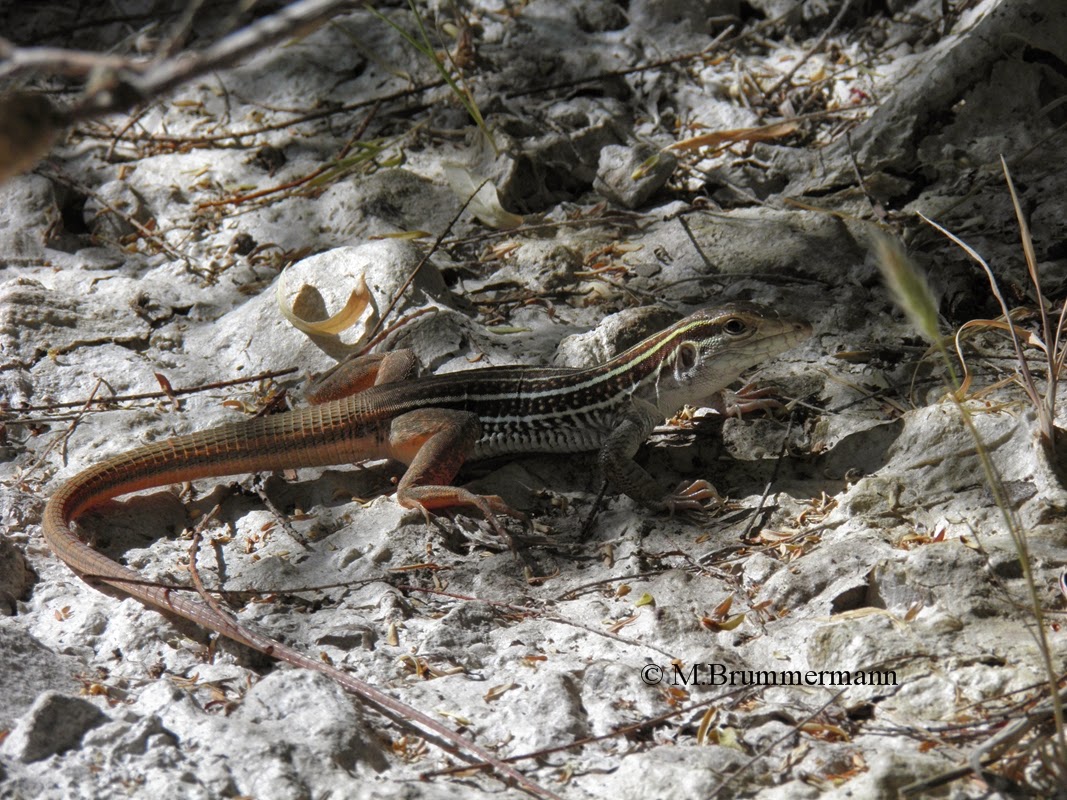 Large Whiptails were foraging. I think this is a Canyon Whiptail still in juvenile colors even though he was at least 7 inches long without the tail. 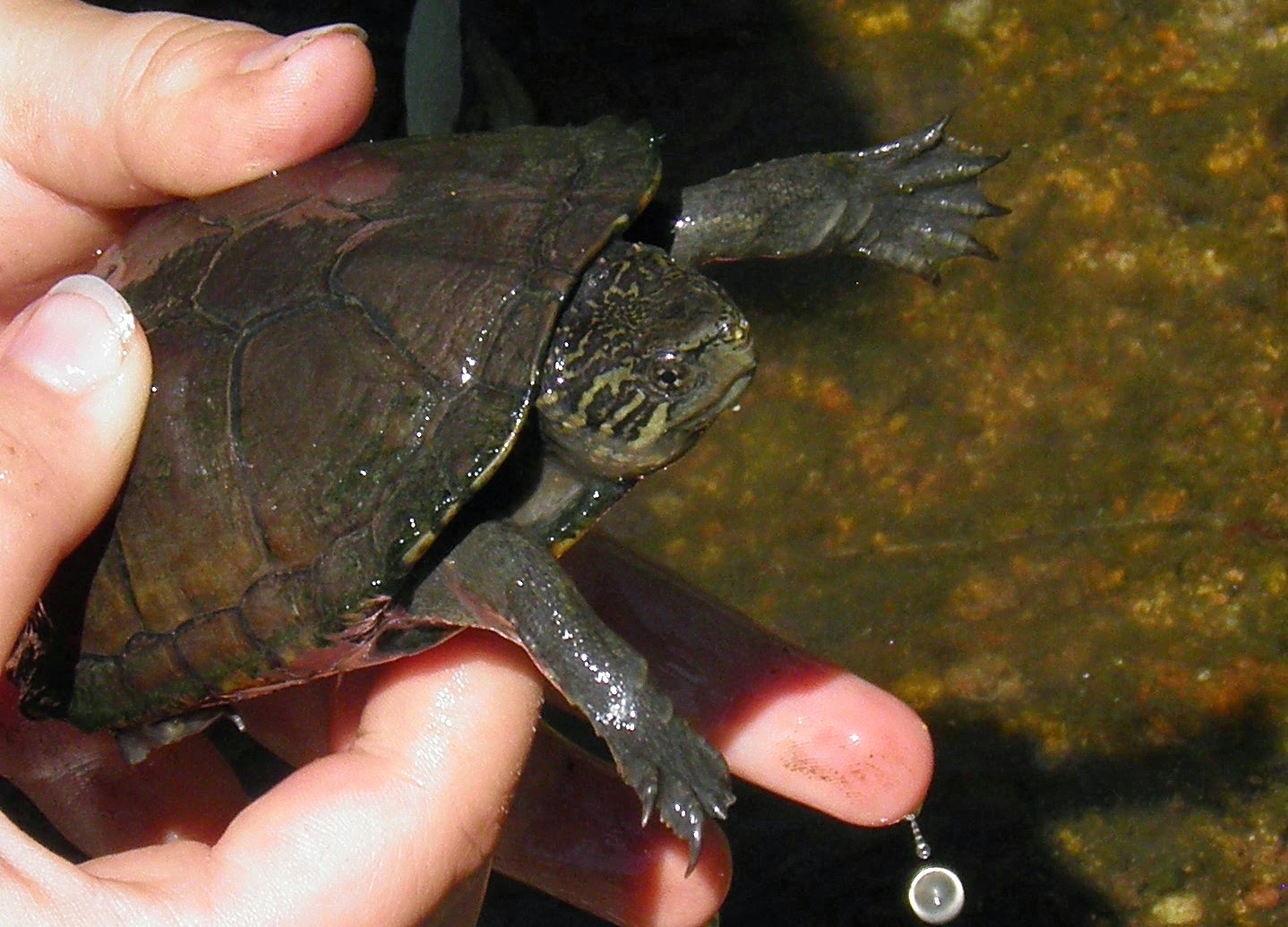 We met some 'herpers' who had caught a small mud turtle. The reticulation of the face and the little spur under the chin indicate that this is a Sonoran Mud Turtle.

So we saw a lot of interesting things and time flew by in a hurry. We turned hundreds of rocks and found scolopedromorphs and other centipedes, just no scutigeromorphs. This is the first time that I guided an excursion to find a special arthropod and failed. I did know that they had not been seen here in the arid pre-summer, but the opinion was that these centipedes cannot dig deeply into the soil because of their long fragile appendices and that they cannot stay inactive too long because they have to satisfy their need for water by either feeding on prey or drinking. So can they not aestivate? To survive here in Arizona they may have to.
If any of my readers find any or know about either the local Dendrothereua homa (Arizona House Centipede) or the introduced species Scutigera coleoptrata (House Centipede) - they are still needed! Please contact me at mbrummermann@comcast.net
Posted by Margarethe Brummermann at 5:49 PM