In my early June blog, I still had to use Doris Evan's saguaro fruit image from the east side of the Tucson Mountains because here in Picture Rocks the saguaro fruits were still green and closed. 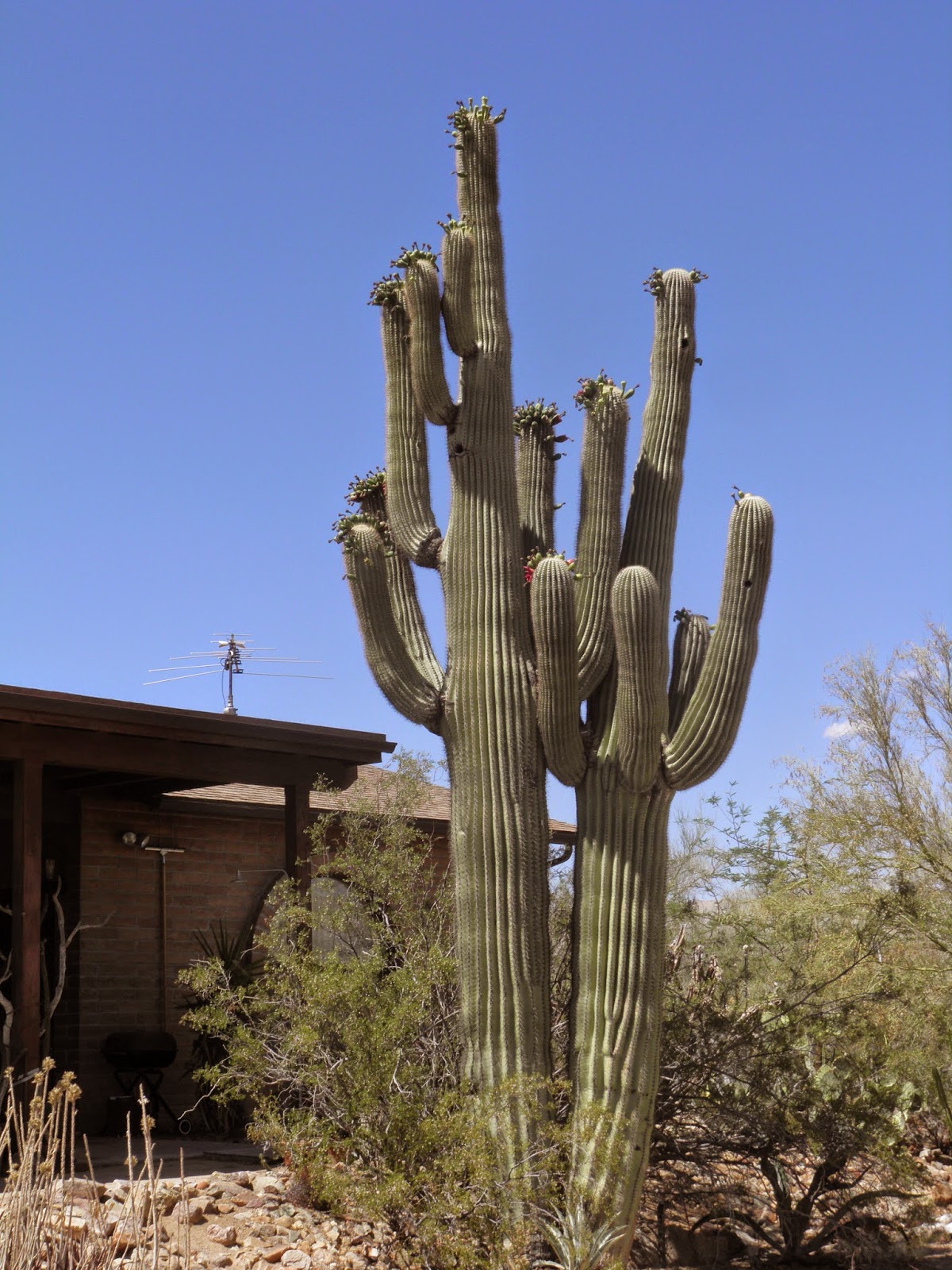 Since then the fruits on our 'House Saguaro' first blushed on the outside, then split open and revealed their signal red inside: ripe! Birds, come and get sweet pulp and seeds! For weeks this bounty (and 2014 seems to be a particularly good year)  has been a steady source of nutrition for the resident animals and entertainment for us. 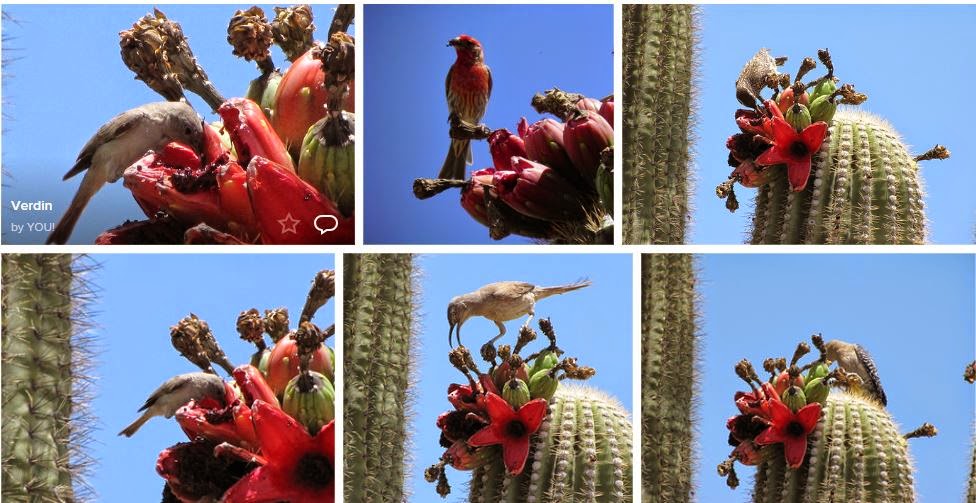 Tiny Verdins and families of House Finches regularly gorged themselves,  Cactus Wren and Curved Bill Thrasher parents were feeding their fledgeling young. Gila Woodpeckers and Gilded Flickers were too shy for good photographs this year, but noisily announced their presence while peaking around from the back. 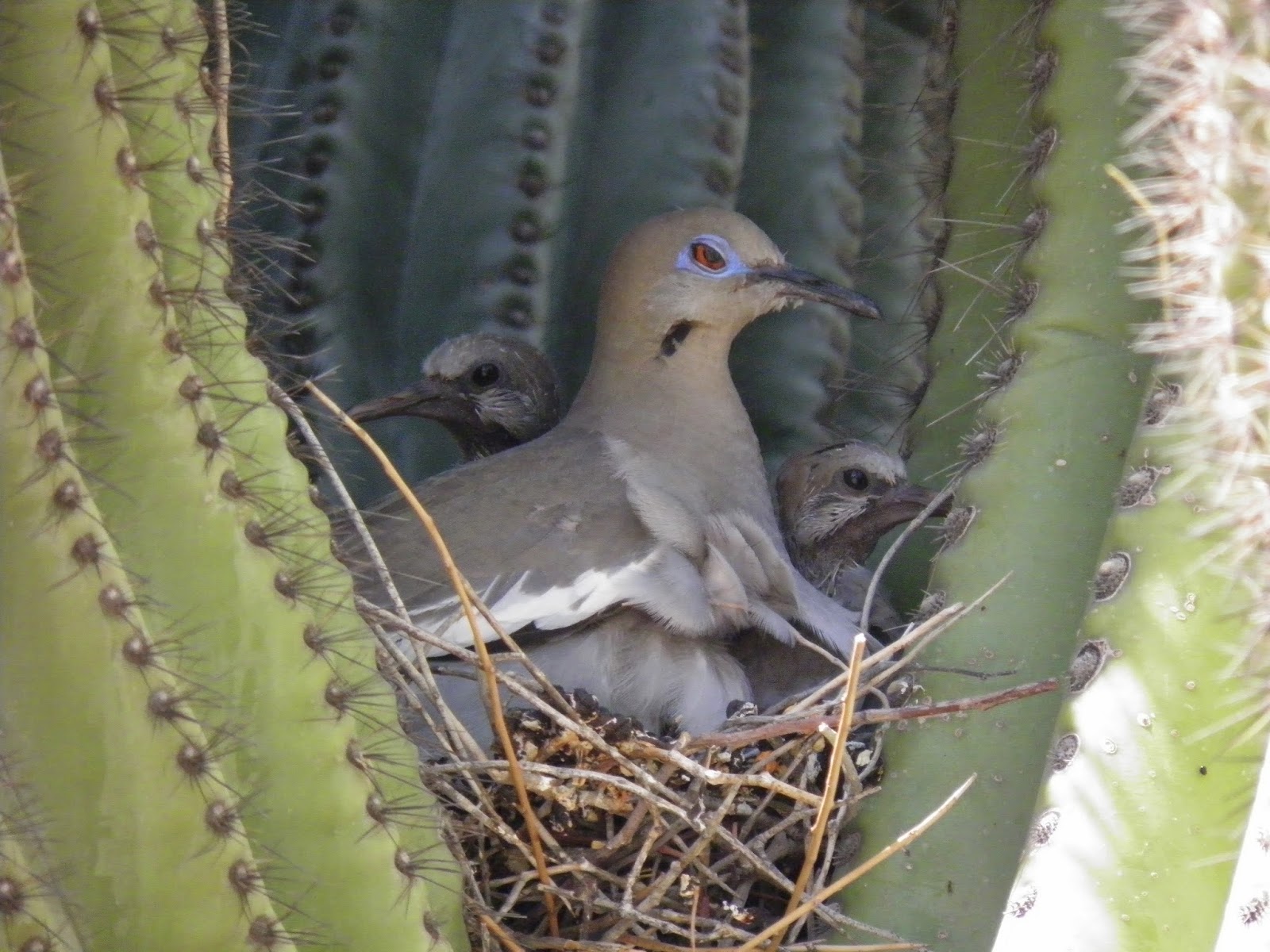 A Mourning Dove and a White Winged dove actually moved into the big cactus, their nests not even two feet apart but separated by one of the massive arms. By now the first set of chicks has flown out and the White Wings have started another batch of eggs. 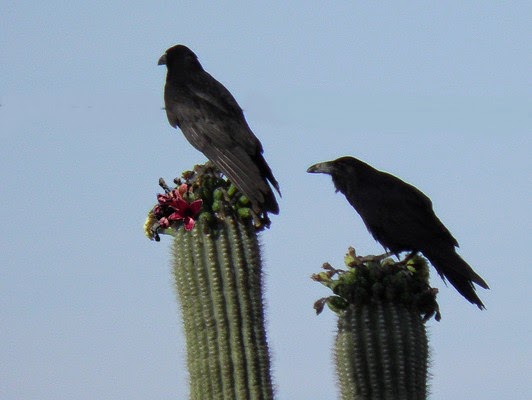 Even a pair of ravens brought 4 youngsters around, causing the other birds to break into loud, angry mobbing. The fruits are surprisingly sturdy, safely supporting those huge birds. The tall columnar cacti firmly hold onto their fruit, even after they are ripe and split open. Why?
The saguaro relies on zoochory (seed dispersal by animals) and especially on the dispersal by birds.
Birds have great color vision and can easily reach the top of the saguaro. The spontaneous splitting of the tough skin allows them access. They devoure the sweet pulp with the seeds, fly good distances, and then excrete the unharmed seeds.

Rodents and ants would also carry some seeds around, sometimes bury them and forget their cache, so that later clusters of seedlings might emerge. But their action radius is limited compared to that of birds and they also tend to chew the seeds and destroy them. So for the columnar cactus it 'makes sense' to keep the fruits out of reach of the ground dwellers and instead allow easy access to gently digesting long distance travelers who lack gnawing tools by presenting the open fruits on top of the inaccessible column (compare to the different 'strategy' of the barrel cactus)   (Quotation marks indicate my flippant teleological descriptions of intricate evolutionary adaptations.)
After the birds had their turn, the fruits are finally falling and landing on  the ground with an audible plop. The star-shaped hulls usually still contain enough seeds and pulp to attract some  hungry quail that don't like the height of the saguaro top and many ants, flies, flightless beetles and rodents. 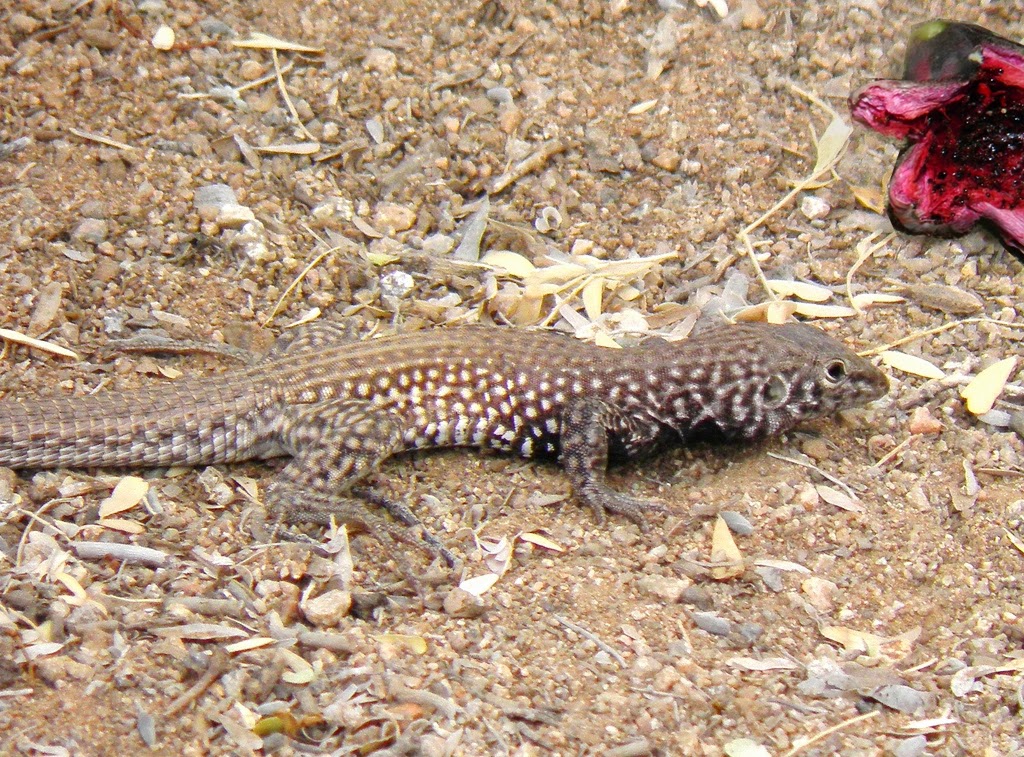 So the food chain of the desert floor is set into motion. Soon photo-shy Tiger Whiptails arrive to hunt for insects.


One can hardly overestimate the importance of the saguaro fruit harvest for the desert dwellers who have by now endured over 3 months without measurable rainfall. In addition, many young animals were born in spring and became independent of their parents at this time, just when the heat becomes merciless and the monsoon rain is still only a cloudy promise at the horizon. Saguaros have horded the winter rains in their immense succulent bodies and thus have the ability to offer (for dispersal services) nutrition and some fluid during the season when it is needed most.

The Tohono O'odam are the desert people most intimately acquainted with the saguaro. To them the ripening fruits on the saguaros signaled the beginning of celebrations and prayers for a good rainy season. They use the long ribs of dead saguaros, with a small cross piece attached to one end, to push the fruit down when they are ripe, but not yet open. Then they split them with the built-in knife which is the hard, dried flower that is still attached to the fruit. Saguaro pulp was one of the few sweet treats available to the desert people. Some of it was made into preserves, but most of it was collected in ollas with water and allowed to ferment to make the ritual saguaro wine, an integral part of rain dance ceremonies that are held to ensure another life-bringing monsoon.
Years ago Stella Tucker, a Tohono O'odam story teller and historian, showed me how the long collecting pole is used and I found out how hard it is to dislodge the fruits before their time.  In my painting Stella is holding the saguaro rib, and the back of her shirt is patterned with petroglyphs depicting the harvest.

Posted by Margarethe Brummermann at 5:01 PM