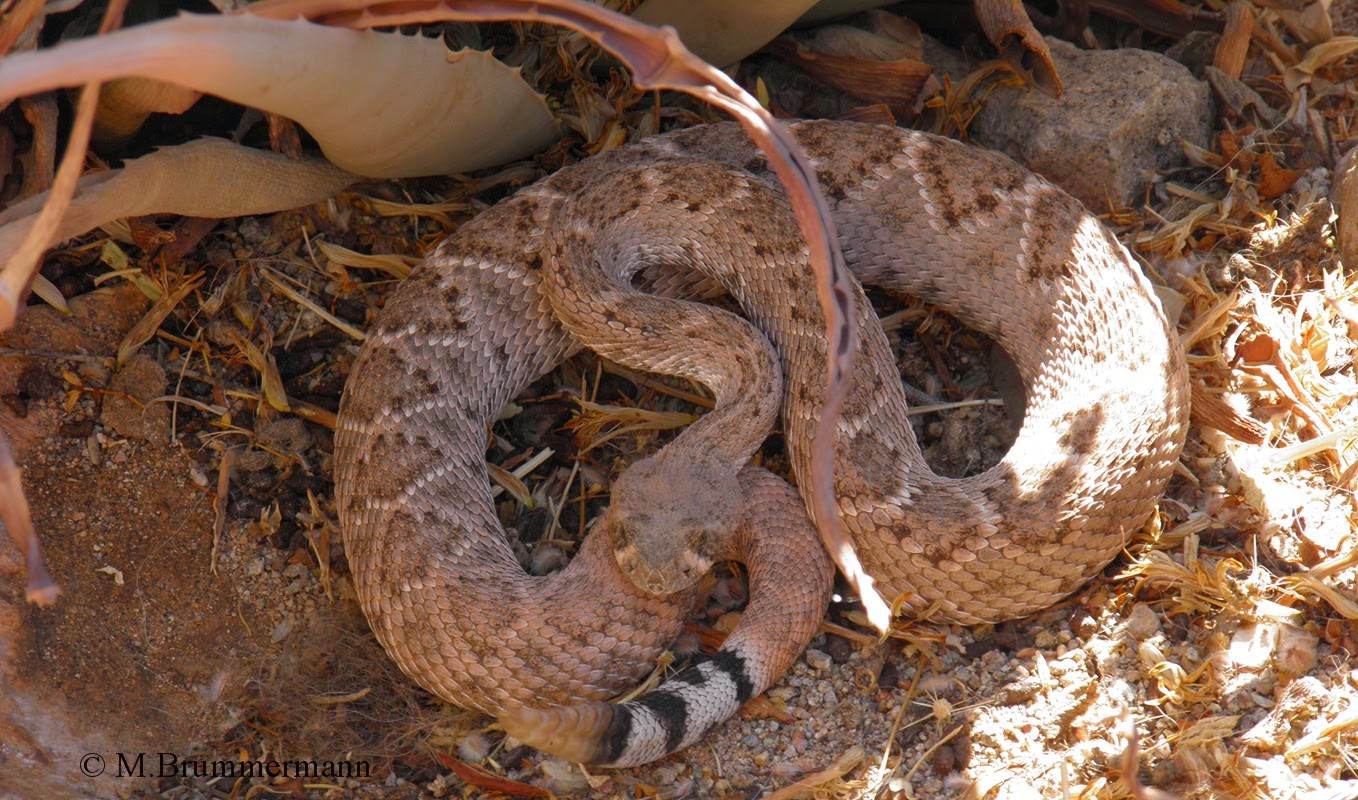 This one visited at breakfast on the patio today. The dogs raced at him, the Laika She-Wolf  just looked and quietly moved away. Frodo (coydog, bitten numerous times) stood close, but save, pointing. Bilbo ran around but stayed away. Cody, who should know better, barked and tried to get too close, so he ended up in time-out indoors. I hope he is not getting senile.

We used to move all rattlers about a quarter of a mile away, only leaving a couple territorial old guys in their burrows. But they seem to be gone. Lately, we are so over-run with packrats that we are now opting to leave the rattlers be. This one is also a good active 'warner', even a hummingbird could set him off. So now he's curled up 10 feet from our table were the dogs are sleeping again and everything is peaceful so far. I looked him deeply between the eyes: he's a Diamondback.

On facebook, an interesting discussion about dog vaccination and treatment with antivenom developed. Of course I do not have any great answers, but at least some experience.
Here is one of the exchanges:

Terry D:
Your dogs all get the vaccine? First year I did for both mine.

I thought if your dog gets bitten it could die? That's why I started getting the anti venom shots. What is the truth about bites and dogs as a rule ? I know as a nurse at the hospital people get admitted right to Icu nowadays then down to the cardiac floor depending on age.

My opinion:
Generally, humans seem to be more sensitive than canines and cats. Wolfs and especially Coyotes probably had a long time to evolve with exposure to rattlers. Immunities do develop (evolutionary), as shown in prey species (Texas A&M). The validity of 'vaccine' has not been proven too well.
My 5 dogs got bitten about 8 times in our 12 years here. The females and one male never, the oldest male once, the youngest, the coyote mix, 7 times.

3 of our older dogs were also snake trained with electro-shock collars  and live snake exposure, but one of them was bitten right afterwards.
The coydog was fed snakes by his mother in the den where he was born, I found the rattles.

We used antivenom once, iv overnight infusion of fluids twice, antibiotics several times (those snake teeth are full of germs). Anti venom after the bite may counter-act organ damage caused by the heamolytics of the snake venom.
The coydog was treated after some bites, but not after others. He always had strong facial swelling, so none of the bites were dry-bites, but he always recovered after about 6 hours. Several times, he didn't even reduce his activity level and ept playing and eating, but was always very tender in the bite area. The last bite got him in the sponge of his nose and he wined. After that, he finally left the snakes alone, and he is a good, reliable 'snake-barker' now. But Amy mentioned age. And she is  right, that is a worrisome factor. My oldest male dog reliably stayed away after training, one bite and treatment (10 years ago) but he now seems to become forgetful and more grumpy...senile? All I can do is to keep him indoors during main snake activity, because I am afraid that a bite might be much worse for him now.

It needs to be said that not all rattler venom is the same. Most individuals produce a 'cocktail' of venoms. There are heamolythic and neurotoxic components and the mix is evolutionary linked to the immunity that may have developed in prey species. So far, neurotoxins seem to be more prevalent in Mojave Rattlers than in Diamondbacks. The available antivenom blocks only haemolythic components. The neurotoxins, if present, would kill too quickly for any intervention anyway. Hence my attempt to correctly identify the snakes that are left in the immediate vicinity of the dogs.

There is the idea that younger snakes are more deadly than older ones because they have not yet learned to get the dose just right, so they inject always all their venom. I'm not so sure. I have seen big old rattlers bite a mouse which then just fell over and was dead. I watched a younger, smaller snake strike at a young packrat and the rat screamed (for minutes it seemed) before it finally died. The snake actually went into hiding and came back later to retrieve its prey.
So the older snake must have administered a more potent bite. Of course, defensive bites may be different.

Posted by Margarethe Brummermann at 12:00 PM