On the way up, when we crossed the belt of tropical thorn forest that covers the lower elevations of the sky island, I knew that that was the most exotic habitat I would see. So I was eager to get down there again on our first full day. The area looked bleached and shockingly dry. Many plants had been badly damaged by a deep freeze that hit the area in February 2013. This was followed by an extended severe drought, as there was no rain at all since June 2013. So most of the expected monsoon and all of the winter rains missed the Sierra Huerfana last year.

Even though many sat dry dry and lifeless, the plants were fascinating. Huge Tree Ocotillos were actually in bloom, Kapoc trees were full of fluffy white seeds. I think I saw a few flowers on Morning Glory Trees. A few Mesquites and Palo Verde relatives added some color. Organ Pipe Cacti and another tree cactus rose up among Boat Thorn Acacias Acacia cochliacantha and Feather Bush Trees Lysiloma watsonii.


A large tenaja still retained some water. Birds and insects were visiting to drink and collect minerals from the mud. Close by we found an enormous shed skin of an Indigo Snake.

I saw a Giant Water Beetle surface to take up air into his plastron  (physical gill) so  I sacrificed the integrity  of my butterfly net and leveled him out of the flat murky water only to discover several leeches as by-catch.

Close by Dale found a big Leaf-cutter Ant Atta mexicana colony. With hardly any fresh leaves available, the ants were busily house-keeping, piling debris and dead colony mates on the huge refuse heap in front of the colony. We noted that the dead ants were dumped unceremoneously, but all in the same corner of the pile. Digging though the material we found interesting beetles (dead) and roaches (alive).


Another ant landed in my beating sheet under a mesquite tree - one of the pretty Pseudomyrmex species that all lead an arboreal life style. I passed the observation and the specimen on to the ant guys of our expedition and they managed to collect just one more specimen at the same location. 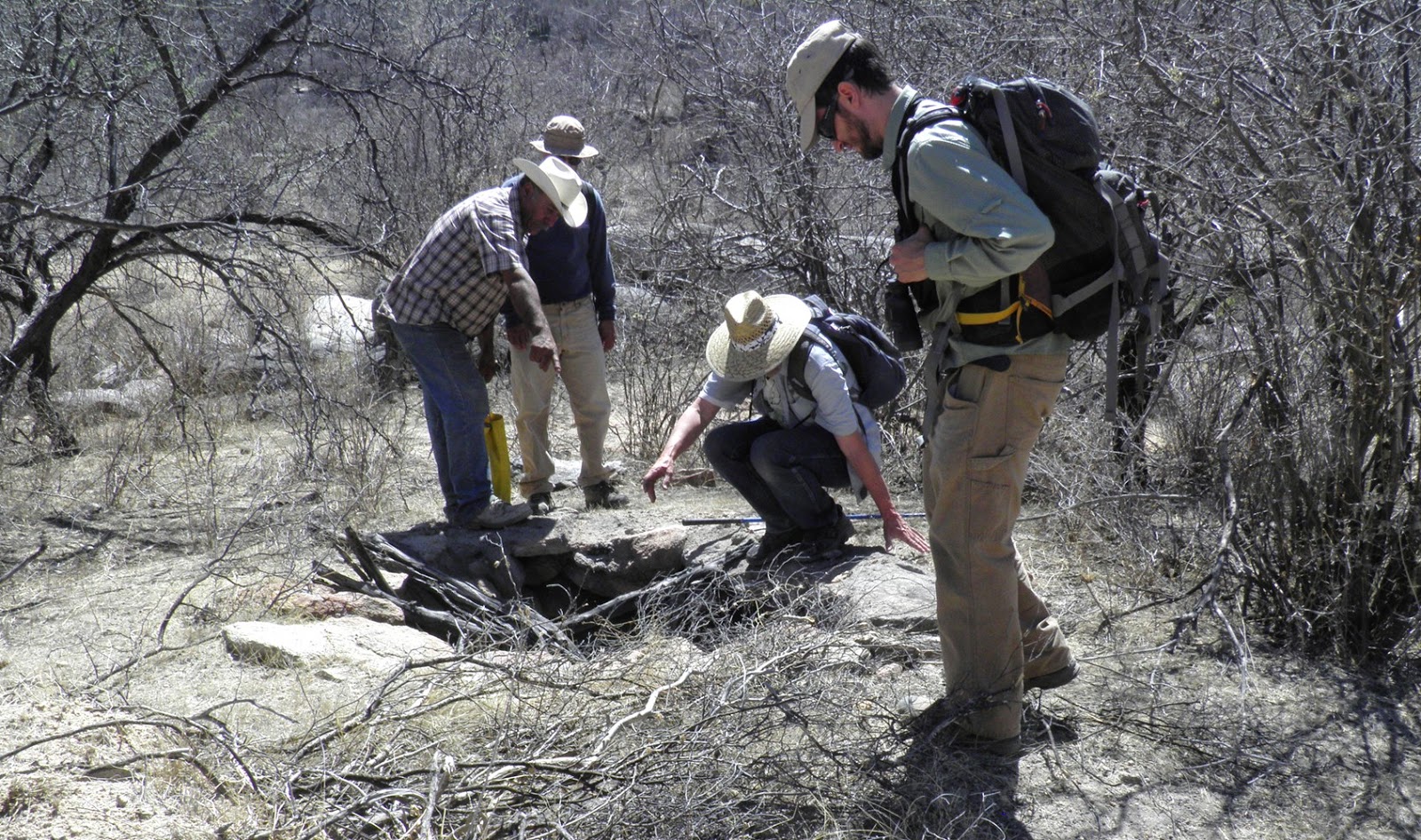 Century old cooking pits along the road indicated where agave (sotol?) hearts had been first cooked and then fermented to produce the local tequila like alcohol. For a long time, this activity was illigal, but who would have controlled these inaccessible mountain paths?

Most of the participants of this particular trip were herpetologists. But the drought had not only diminished the insect fauna but also driven most reptiles into hiding. A few lizards, all old acquaintances from Tucson, obliged.

But my friends wanted to see snakes! So when we met a cowboy who said he had seen a big grey snake a couple of hours ago and several miles up a dirt road, we drove out to find it. Less enthusiastic and also doubtful that the snake was still waiting to be found, I decided to stay in a little camp where we left the cars. The two guys living there seemed happy for the company, even if the communication was difficult. First the showed me, in confidence, a bag of gold sand that the had dug up while digging a well. It wasn't shiny, just very heavy. Then they cooked coffee, to be served in cups that were hanging from a tree. We even had cookies! Also in the tree above the coffee table were pieces of a javelina, drying to become jerky. When Tom Jones returned from the unsuccessful snake hunt, he was very interested in the javelina meat, and our gracious hosts brought out the filet pieces and gave them to him. People can be so generous! They would not take no for and answer.

Posted by Margarethe Brummermann at 6:09 PM