Two years ago, my young Japanese friends from New York came to collect some Hercules Beetles (Dynastes granti) that they wanted to breed. They got eggs, also a few larvae, but had no luck raising them. They complained that in the US, unlike Japan, there is no good breeding medium commercially available.

So last year I decided to start my own beetle farm, mainly to try out a recipe for a breeding medium that I got from a friend. It started with oal pellets for the barbeque and involved a lengthy fermentation process. I started early. Then everything was set up at the beginning of July and the only big dynastinae that were around that early were Strategus cessus from Madera Canyon. So I tried the method with them. The beetles not only produced eggs, but the eggs also hatched very quickly, by mid August. The larvae were voracious and grew quickly.

When I proudly posted baby pictures on facebook, I was told that these larvae had not been formally described. The species is more localized than the other Strategus species. It only occurs in Arizona, New Mexico and NW Mexico. Also, they lack the impressive horns that the males of most other Strategus species sport, so I guess collectors are much less fascinated with this species. Anyway, Brett Ratcliffe at the University of Nebraska was happy to write a scientific paper about them. So I sent him a few larvae to be preserved at different stages for description.

My S. cessus larvae got rather big but around Thanksgiving they stopped feeding. Instead they became very agitated, one actually escaped from the container. They were obviously searching for a pupation spot. Or did they not want to stay in the old medium to pupate? Fungus gnats and worse, mites, were contaminating the containers by then, and I already knew that the pupae might be vulnerable to predation where the sturdy larvae had survived just fine.


So I got clay, first from my mother-in-law's backyard, and when that didn't work, from Madera Canyon. Finally the larvae settled down and buried themselves deeply. Three of them stayed close to the transparent walls of the container so I could watch their progress. Except there was none. All winter long, and through March and most of April, the big larvae were just sitting in their pupal chambers, if that's what they were. Occasionally they turned over. They seemed to loose volume and became more opaque than before, but for months nothing else happened. I began to wonder if they might need a cold stimulus. Then, in April, I could see one pupae, but it soon darkened and died. Brett checked the ones he was keeping in Nebraska at this time, and they were dead as well. Still, one larva was holding out and one was hidden from sight.


On the 19th of May, the visible larva had changed. It was either dead or? I decided to dig it up. When I broke through the hard crust of the pupal chamber, I found a healthy, gold brown pupa and the empty last larval skin. This one will go to Brett to complete his collection of developmental stages.

When I dug out they other chamber, it contained a beetle that was just about to eclose, to break out of the pupal skin. Head, thorax and front legs were already black and shiny with hardened exoskeleton, and the front part of the pupal skin had come off. But the pupal skin which had become transparent and brittle, still covered everything else. The wings were still soft, white, uninflated and folded forward towards the underside (ventral). The abdomen was bigger than in an adult beetle, containing the fluids necessary to break open the pupal skin in back and inflate the wings.
Insects are soft and vulnerable at this stage, so I carefully placed the beetle back on the clay. I assume he would need a rough surface to find traction for the now rather functional front legs to pull away from the rest of the pupal exuvium.


When I checked again a few hours later, the wings were properly folded back, the front ones (elytra) covering the membranous Hind-wings. They were still white and teneral, the abdomen still too big, but it already looked very much like an adult beetle. 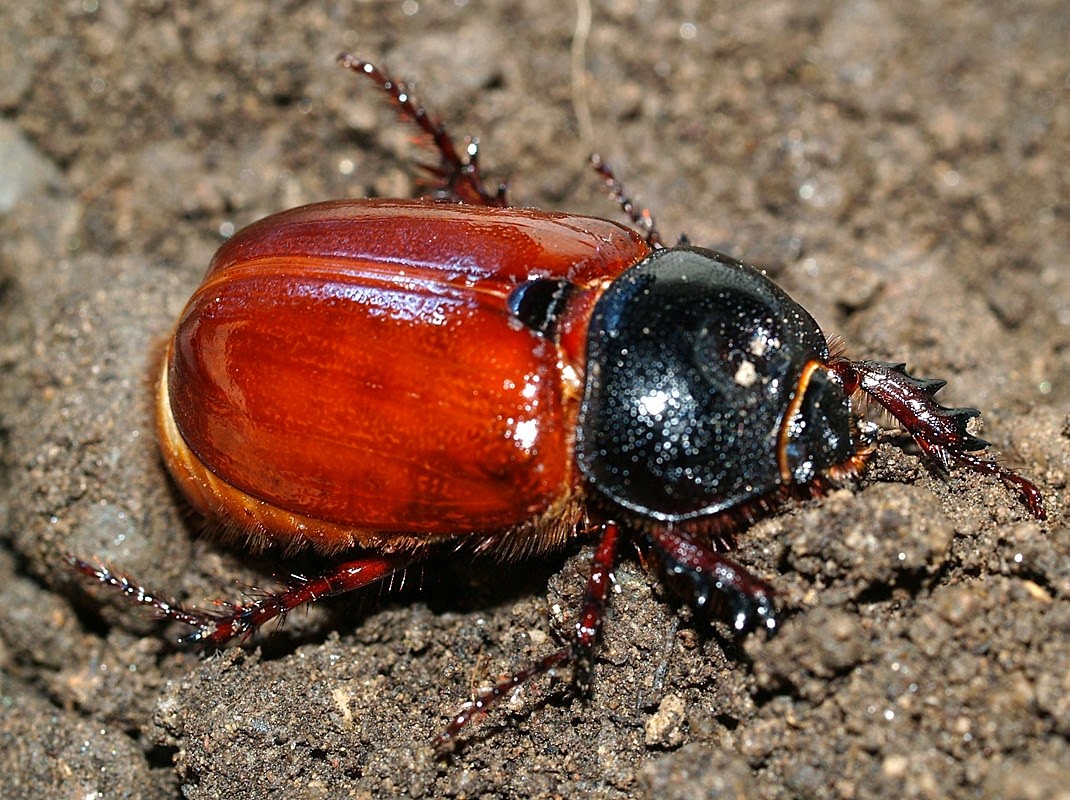 For several hours the hardening and darkening process of the exoskeleton progressed. This what it looked like at 11 pm. 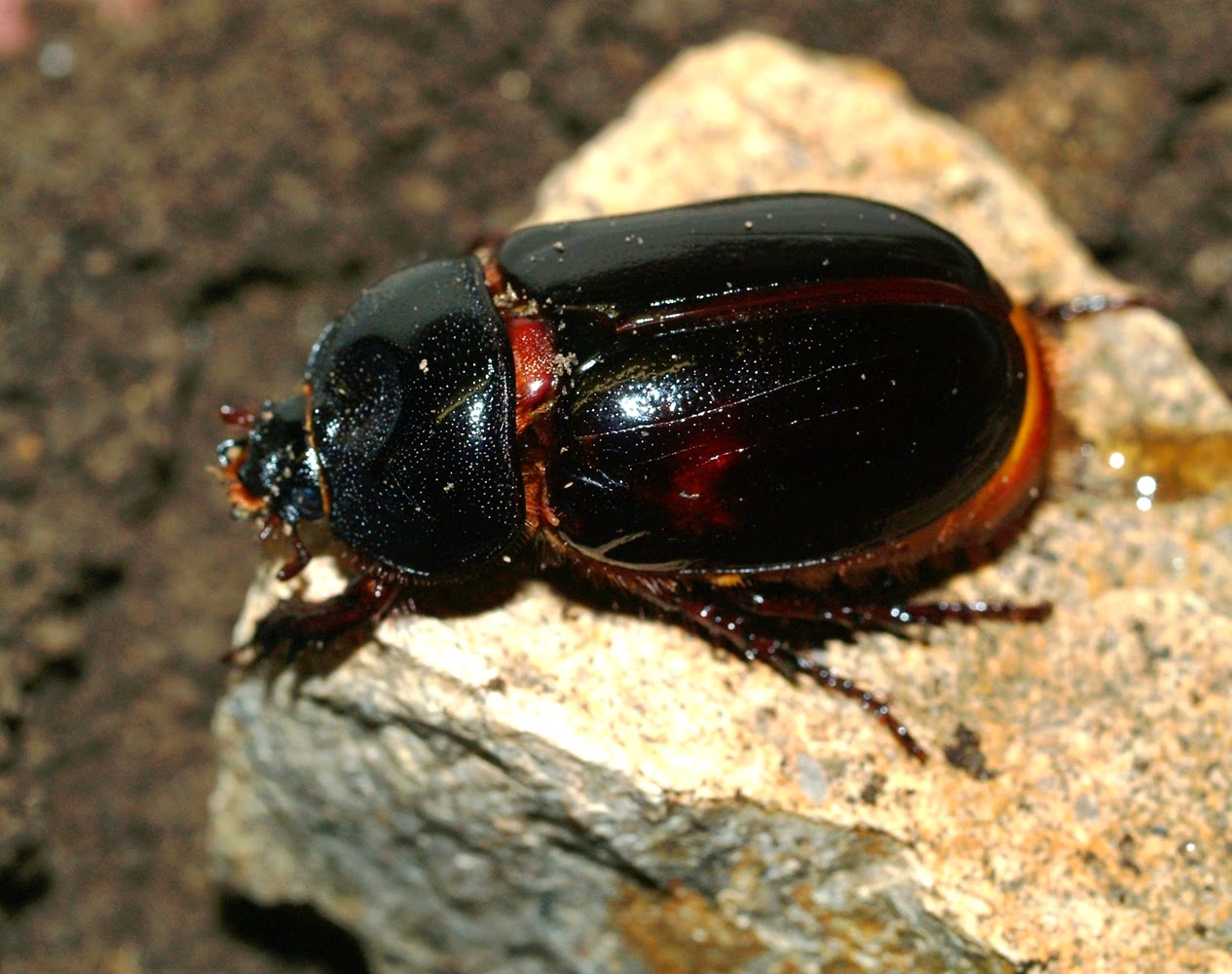 I the morning a perfectly hardened and dark beetle was trying to bury himself in the clay again.
I kept the containers with eggs and larvae in our basement in the water heater room, where it's dark and the temperature never changes dramatically.  I do not know where the beetles get their input about the seasons. I am raising 3 species now, and they all seem to have their own, species specific rhythms.  Strategus aloeus beetles, of the three-horned species, laid their eggs much later than their smaller relatives S. cessus. Then the larvae grew faster, buried into the depth of their containers and pupated. There was no great winter pause. Right now, in May, they are all resting as pupae.


The Dynastes granti females laid eggs all the way till late November when the last of them died. The eggs then rested through the winter and the first viable larvae appeared in late January. Eggs that were laid late also hatched last. All Dynastes granti larvae are still feeding and growing.

I assume that in nature the freshly hatched S. cessus stay buried in their pupal chambers until the first strong monsoon rain wakes them up. I have seen mass emergencies during those early storms twice in Madera Canyon. The beetles mate then and their flight period does not last very long.
Posted by Margarethe Brummermann at 3:10 PM