It's a lizard, not a toad 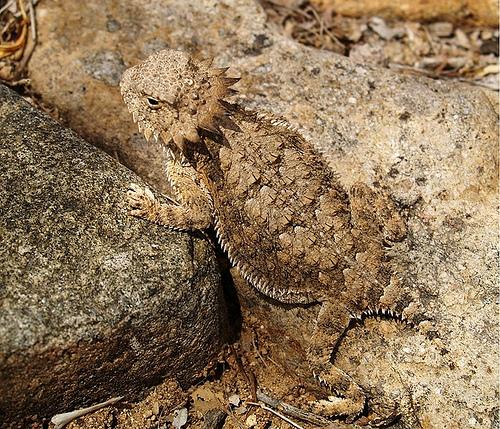 In June when Saguaro fruit are ripe, ants come to feast on them and Horned Lizards emerge from hiding to feast on the ants. When I posted my first image of a juvenile Regal Horned Lizard (Phrynosoma solare) to the photo gallery of the Arizona Star and sloppily called it a Horned Toad, Doris Evans, a teacher and long time Arizona Sonora Desert Museum docent corrected me right-a-way. We have become a good friends since then. 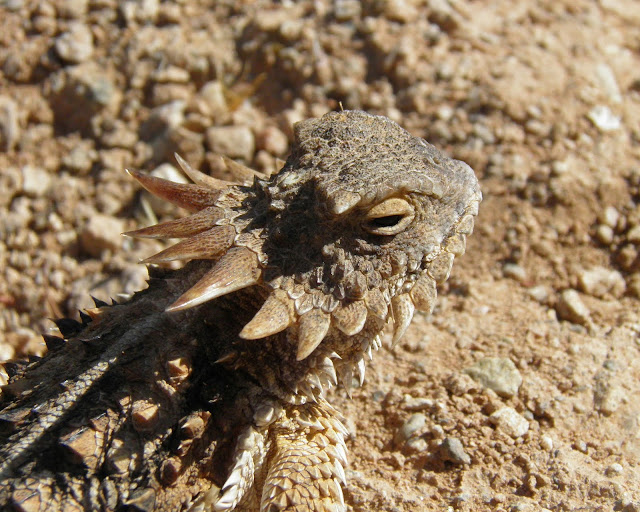 So: it's a lizard, of course. Even if he's short and round and waddles a little bit like his neighbors, the Sonoran Desert Toads, the scaly skin and his complete independence of water mark him clearly as a reptile. See his regal dragon profile above! His English name 'regal' and the Latin 'solare' (sun-related) both refer to the full crown of spikes of our Sonoran Desert species.

After mating in the middle of the hottest season the female of our low desert species lays up to 33 leathery-shelled eggs in an underground chamber that she has prepared in the sandy soil. 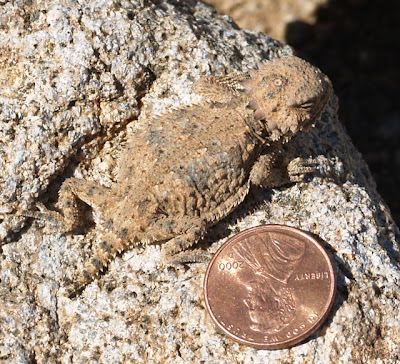 After hatching, the little ones are on their own. They are vulnerable to many predators, so the large clutch numbers are not excessive.

High in the Catalina Mountains, a close relative, the Greater Short-horned Lizard, gives life birth to even more babies - up to 48 per clutch. In a lizard, giving live birth means nothing more than laying very thin-shelled eggs that rupture during the birthing process to release the fully developed young (Ovoviviparity). This may be an adaptation to the difficulty to bury eggs among those rocks and low night time temps that might interfere with egg development. 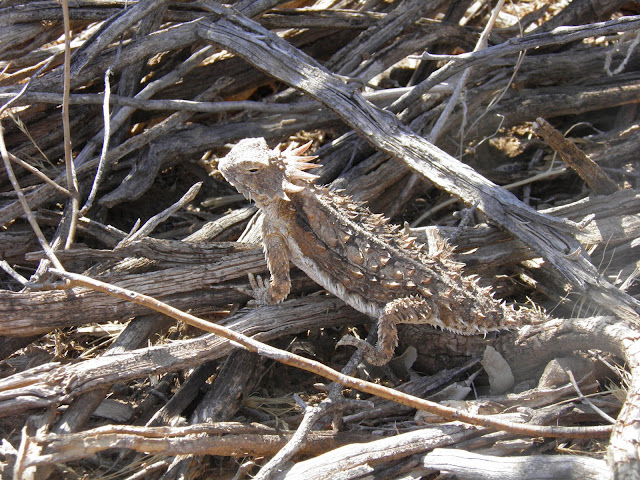 Extremely spiky scales make it difficult for predators to swallow the lizard whole. Smaller youngsters do get gobbled up in numbers by voracious Roadrunners and hungry Kestrels.
In addition to being spiny, the fully grown lizard, when threatened, makes himself very flat and wide. I have been able to rescue several from our Husky, who is a terrible predator constantly prowling for extra food, because she just couldn't get a grip on the flattened disk. 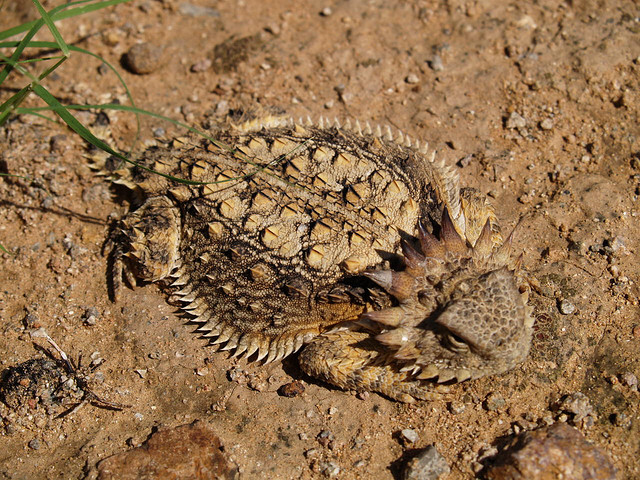 None of those horned lizards that the dog attacked and even one that she retrieved in her mouth used the defense against canines described in literature:  attacked horned lizard are said to spray 'blood' from their eyes - as far as a foot! I found this impressive video.

When I did my postdoc at the physiology department of the University of Arizona we speculated that the source of the excretion may be the extraorbital gland situated above the eyes of reptiles and birds. In seabirds like Albatrosses and reptiles like sea turtles, who have no access to fresh water, these salt glands, with a much higher concentration capacity than the rather simple avian and reptilian kidneys, are responsible for elimination of excess salt from the animals' blood stream. So the fluid constantly running down (on the out side of) a seabird's  nose is a brine much more concentrated than either sea water or blood. As a desert creature with limited access to water the horned toad also uses salt glands. So could it be that the horned lizard is ejecting something more concentrated than blood? But, salt gland excretion itself is neither red nor pressurized...So that's not the answer.

Wade Sherbrooke (Sherbrooke 1981) describes a complex vascular mechanism that allows the lizard to increase the blood pressure in parts of their head. This pressure difference between head and body has other functions in thermoregulation and molting, but as part of this unique a defense mechanism it can also produce a fine stream of blood originating from the blood sinuses located in the eye sockets. The discharge seems directional and can reach a distance of up to four feet. This still doesn't explain why coyotes and other canines don't just lick their lips and pounce on the tasty morsel, but react with violent head shaking,  excessive salivation and signs of distress. Maybe the supraorbital salt glands, located so close to the blood sinuses where the spray originates do have something to do with it after all, or maybe the lizard's diet, consisting mainly of ants, some of witch carry potent poisons of their own, is the source of some distasteful chemical in its blood.
PS: Eldon Braun just sent me the paper of a study on the composition of the ejected blood: It is just about identical to the systemic blood in hematocrit, osmalilty, sodium and potassium content.  But coyotes reject food laced with the ejected blood, but not if systemic blood is mixed into the food. 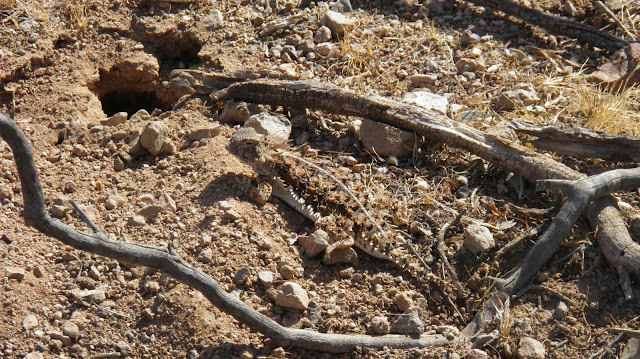 By far the most successful and much less costly protection of the horned lizard is his amazing camouflage. His color and pattern brake up his shape and blend with the sandy ground. Even the spiny scales look just like sharp edged rocks, and the middle stripe that of this individual echoes the dead creosote twigs so successfully that I kept losing him in plain sight, specially when he moved around in his typical stop-and-go-and-freeze pattern of motion. 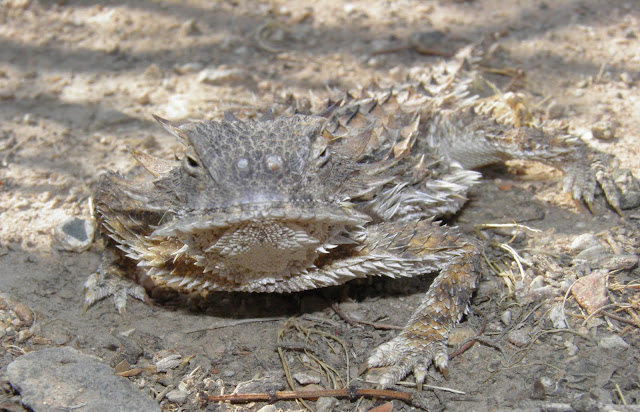 His eyes are shaded under heavy ridges and often half closed, so they don't draw attention to him either.  In his usual pose the body is pressed against the ground and a flaring fringe of spiky scales along the sides eliminates any cast shadow. If he has to straighten up, the light color of the underside acts as counter-shading that reduces his optical three-dimensionality from above (and most of his predators are taller than he). 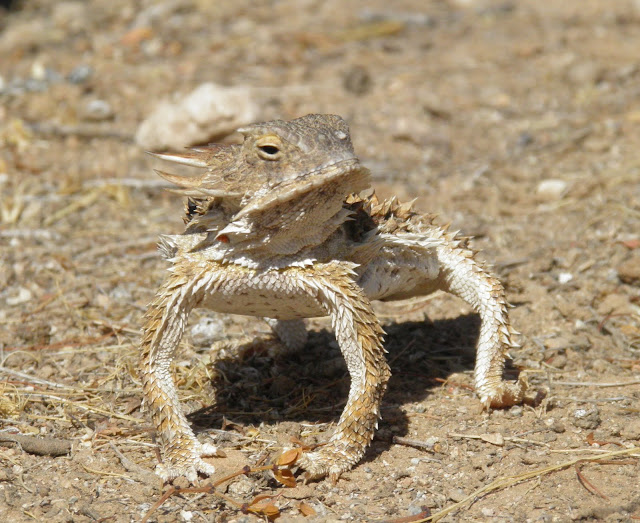 In this last photo, he abandoned his cryptic behavior for a moment. At very high temperatures, all our lizards  minimize the contact with the hot ground by standing high on their legs and even lifting their toes off the ground. But the horned lizard also uses this pose as a threatening bluff when a predator (probably my camera in this case) molests him too much. (Note how the cast shadow now betrays the lizards location!)


Horned Lizards make a very difficult subject for a painting. An animal that developed attributes to make even its shadow inconspicuous and distort its shape does not stand out well on watercolor paper.

Posted by Margarethe Brummermann at 6:48 PM