The males of several solitary wasp and bee species come together at dusk to sleep in dense aggregations of bodies. The phenomenon has been described repeatedly - Eric Eaton had two blog chapters last summer and John Alcock in his book 'In a Desert Garden' also devoted several chapters (and many evening hours) to sleeping bees.
The bees or wasps cluster conspicuously on free standing plant parts, and it is difficult to see the advantage that this behavior entails.  I was tempted to call it 'bachelor parties' in the title, but yesterday at the Santa Cruz River in Marana I watched a group of Sand Wasp males come to rest on a twig of Burro Weed: No partying going on.


I found the sleeping place by following several slow-flying wasps that caught the evening light very nicely. They led me to clump of wasps that were already settled. The newcomers picked a place, shuffled and pushed their neighbors a little, sometimes had to fly up again and find a new spot, but then immediately became very quiet and non-responsive. To collect one, I simply pushed him into a vial. No protest from him or his neighbors. Alcock  had observed the same passivity towards a Bee Assassin Bug who just came and collected his victims while the others slept on.

Alcock also observed the bees' unwavering drive to settle on their chosen branch and nowhere else. They would come back to the same twig for several nights, even after he experimentally moved it to a slightly different location, but they did not accept a similar one that he placed in the original location. Chemical traces of last night's gathering seemed to play a role in this preference. I remember seeing the long horn bees several times in the same spot last year, but since neither they nor the sand wasps are in my own backyard I didn't have a chance to really follow up in detail. 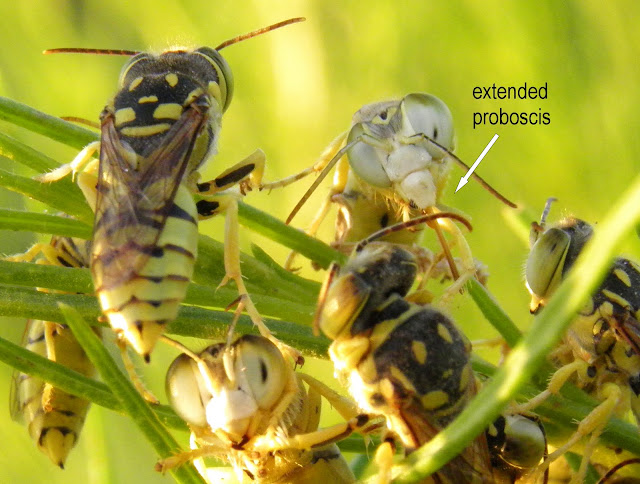 Yesterday I filmed the landing of several new arrivals in the sand wasp group and noticed in the video that at least two stuck out their proboscis repeatedly. They didn't seem to actually lick anything, so what were they doing? I am aware that the chemical sense of insects is not limited to their mouth-parts but is located on the antennae and even the pads of their feet (flies). But why did these arriving males stick out their tongues like tasting the air around them? Check out the video on you tube and judge for yourself.

On a cool morning in May of 2008 I found more than fifty Tarantula Hawk males resting on a knee-high herbaceous plant. There were no flowers offering pollen or nectar - the wasps had probably spent the night there together and were just getting active. This clustering behavior is in strong contrast to their day-time attitude: Tarantula Hawk males are known to stake out territories centering around hilltops or tall bushes.

In June of several years  I watched  large numbers of wasps in the late afternoon in a row of Desert Broom (Baccharis sarothroides) bushes along an irrigated cotton field of the Avra Valley. They were not all of the same species, not even the same family. The majority were in the Sphecid  genus Chlorion. Dozens of those big dark metallic wasps were running around on and then settling  to sleep among the slender Desert Broom Branches.


There regularly were also males of two species of Cicada Killers (Western and Pacific), Tarantula Hawks, Velvet Ants, Pottery Wasps and even two species of Paper Wasps (flavus and dorsalis). Although there was a long hedge of similar looking bushes, the wasps seemed to frequent just a few of those. The observations were made in June of three years when the Desert Broom was not yet oozing any juices, and the wasps did not seem to be chewing to release any plant juices as they do later in the season. Taking into account  Alcock's branch-displacement experiments, one could speculate that there was a chemical signal emitted by the wasps that drew more wasps, in this case even across species limits.

So the  tendency among male wasps to seek each others company for the night seems to be widespread, but depending on the species this can range from loose aggregations (which can be multi-species) in the same bush to dense clusters on the same branch. Densely packed groups seem to always consist of just one species.

The evolutionary advantage of this behavior is not clear. To me it seems that the loose aggregations maybe the more primitive version which excludes group-thermoregulation as a primary incentive. All these males are without stingers, so they can't deter predators in a group-response. Actually, they are so passive, they don't even seem to profit from the increased vigilance of a multitude of  eyes. Alcock concludes that the aggregation may result in a dilution of risk for the individual, but one could argue that such an accumulation of rather sluggish prey could also draw predators? If I can learn how to find the wasps reliably and repeatedly, shouldn't generations of predators have figured it out as well?
Posted by Margarethe Brummermann at 12:41 PM