Arizona Wild Cats (and other wildlife) in Watercolor

The encounter with the bobcat at Sweetwater reminded me of my old habit of interpreting adventures like that in watercolor. Dissatisfied with just photographs, I began this kind of painting during my postdoc at the University of Trondheim in Norway. My flickr album 'Norwegisches Bilderbuch' shows those northern impressions. 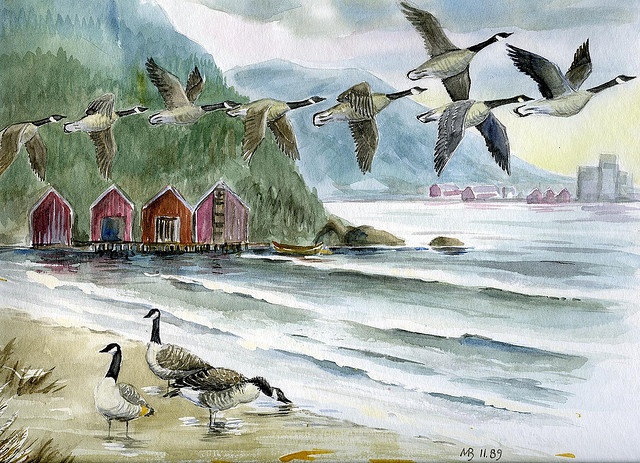 Stylistically, the images were narrative and often composed from memory. They tended to focus on an animal encounter and place it in a setting that seemed most typical, but wasn't necessarily realistic. 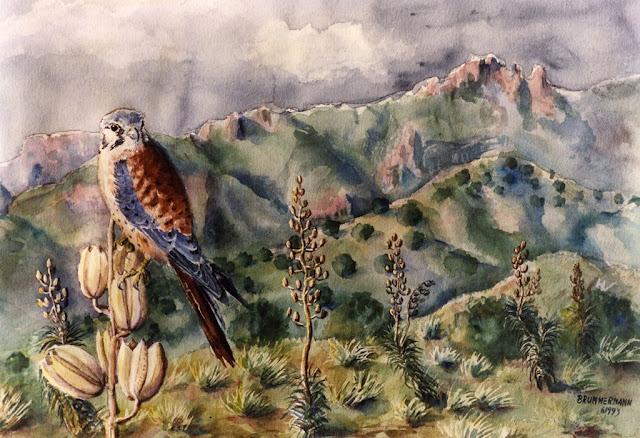 I one of my first Tucson paintings, the American Kestrel has a background showing of the south side of  the Catalina Mountains but with the vegetation of the grasslands around Oracle. 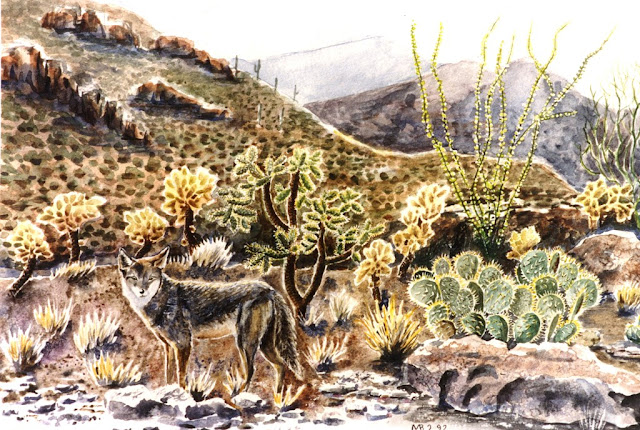 After only a month in Arizona crammed the shapes of all the cacti that impressed me so much into a painting of a Coyote that had crossed my path close to Gates Pass. 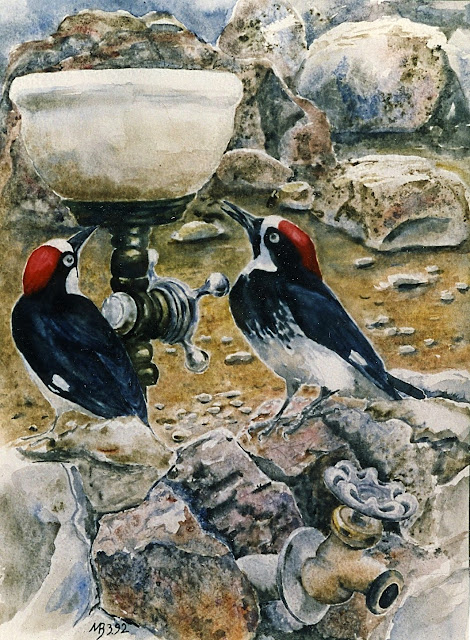 At that time, the introduction of Colorado River Water was a problematic topic in Tucson, so I painted my Acorn Woodpeckers in front of a little fountain at the Madera Canyon Lodge and titled it 'CAP Water?' 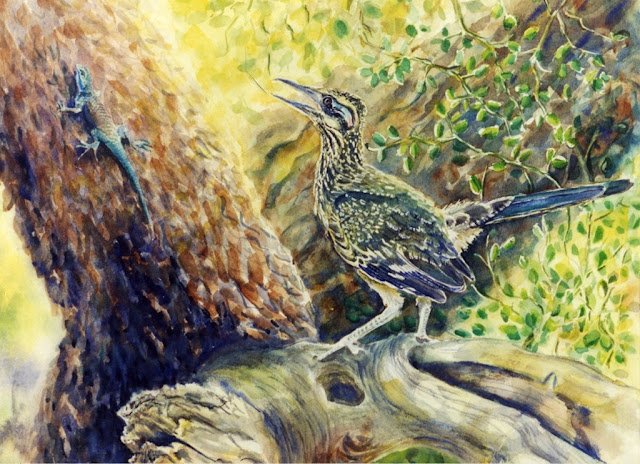 The Roadrunner was probably a great grand father of the two guys that I just photographed at Sabino Canyon. He was as unafraid of humans as thy are and chased his lizard up a mesquite tree right at the visitor center (which was much less imposing back then). 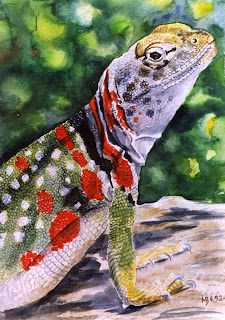 On a hike to Weaver's Needle in the Superstitions I saw Collared Lizards running on their hind legs like miniature dinosaurs, but the one that held still for a reference photo was a female from the Arizona Desert Museum. I don't remember why I chose such a saturated green for the background - maybe just to show off her colors. Hard edged and overly detailed, she makes me cringe a little now. 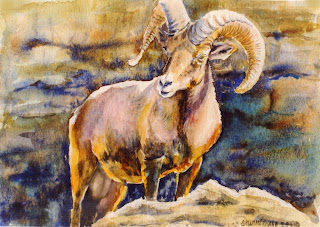 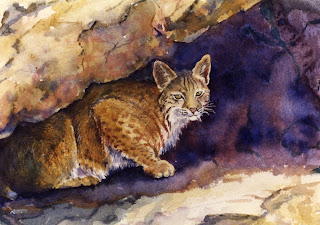 I liked the ASDM settings with their carefully constructed artificial rock formations so much that I painted bobcat and bighorn sheep there before I ever saw them in the wild. 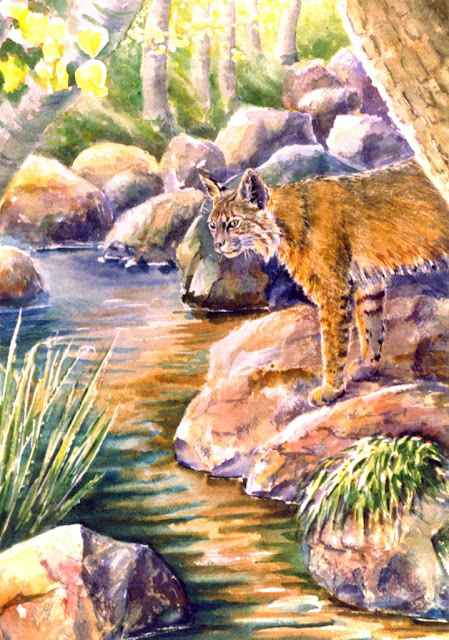 Later, at the creek at Madera Canyon, I walked right into a bobcat that looked much more impressive than the ones in captivity. By the time I painted him though, I had just been in some aspen forest around S. Francisco Peaks, so the slim silver trunks appeared in the background. 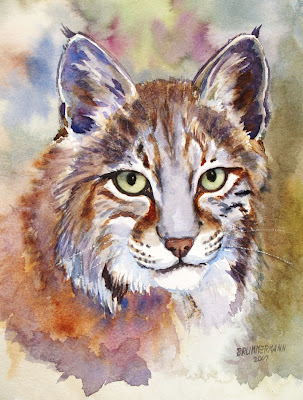 As developments encroach on their territory, bobcats are becoming quite used to people and their patio furniture. The portrait was half finished when its subject slid of an Orovalley friend's chaiselongue, so I had to finish it from photos. 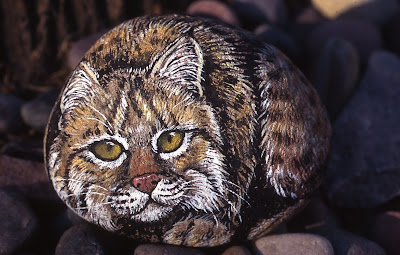 I liked his face so much that I even included him in a series of paintings on river rocks. This heavy rock had a diameter of more than 12 inches. 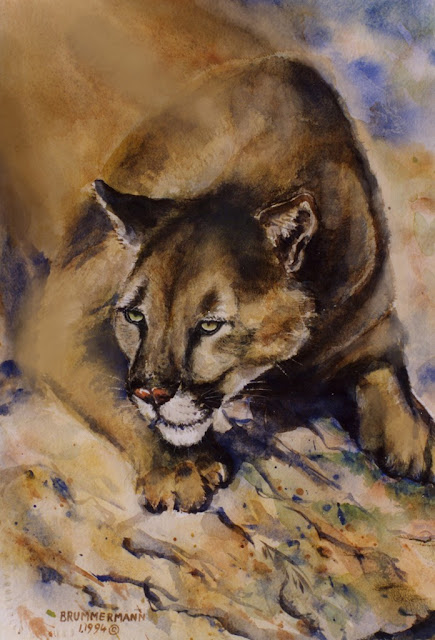 I waited for years for an encounter with a mountain lion and delayed that tempting motive. At a ranch on the San Carlos Apache reservation I even rode along with hunters who were after a cattle-thieving lion, found huge tracks, lots of skunks, and a porcupine... I still haven't seen much more than the blur of a fawn shape leaping up a slope above the Lodge at Canyon d' Chelly - but I clearly saw a long tail trailing behind - so what else could it have been? 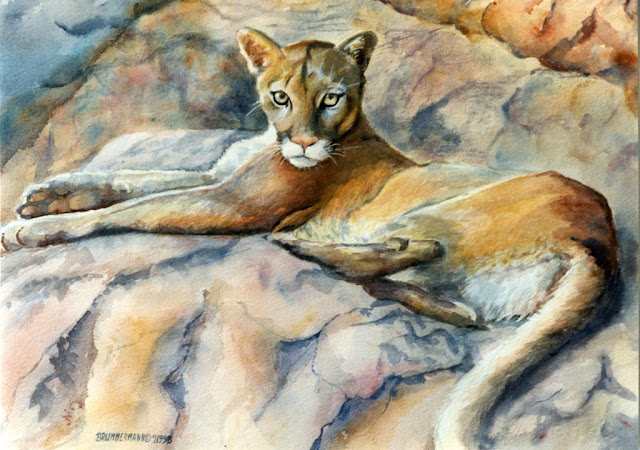 I then painted one from a photo and one with my easel set up at the Mountain Lion enclosure at the Phoenix Zoo. A critic later suggested a more contrasting background to make the cat stand out better. But that just didn't feel right. 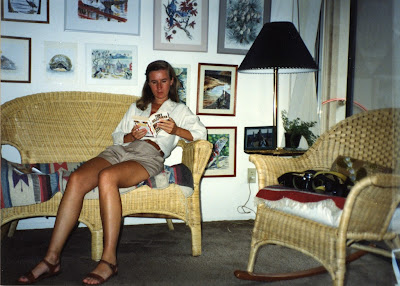 All the paintings above, with the exception of the bobcat portrait, are 10 to 20 years old, and so is the photo, taken in my first little apartment on Swan and River Rd. My painting style and choice of topics has changed since then, but I still enjoy the memories contained in the old images.

The original paintings were sold to private collectors. The copyright is owned by me, and cards and prints are still available.
Posted by Margarethe Brummermann at 4:01 PM