On our way home from a family visit in California, we joined our friend Robyn Waayers on a hike and bugging trip along Pine Valley Creek in the Cleveland National Forest. Actually, Randy and the female dogs decided to instead launch in the shade at the trail head...but Cody and the 'pups' ran along and had a great time wading in the clear water of the creek. 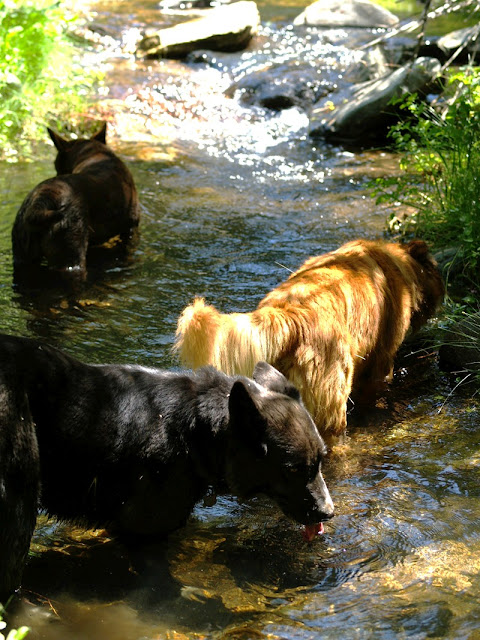 Clouds in the sky announced the beginning of the monsoon season in Arizona to the east, but Robyn told us that summer rains would be quite unusual for this area. Nevertheless, besides the ubiquitously blooming buck-weed, we found some very nice wild flowers high above the creek where the trail passes among oaks and sage brush.

But there was something ominous about this canyon forest: Many of the biggest oaks were dead. 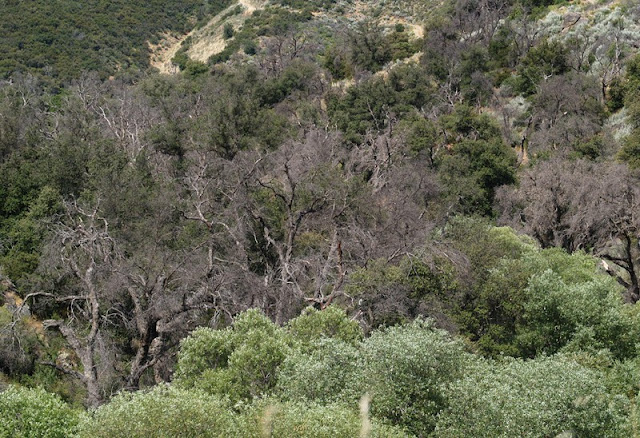 This is the sad result of Agrilus auroguttatus infestation . We found some of the rather pretty buprestids (metallic wood boring beetles) in lime traps. In California,. A. auroguttatus has a devastating   effect, while the same speciesdoes not do much damage in its home range in Southern Arizona and Mexico. The reason may be a difference in climate and in prevalent species of oaks.

The beetle lays its eggs on oak trees of  a certain trunk size. In California, the larvae kill the host tree by girdling the trunk in the cambium and phloem layer of the bark. Having seen the devastation I can only hope that everyone understands the danger of transporting firewood, a sure way to spread this destructive pest. See addendum below! 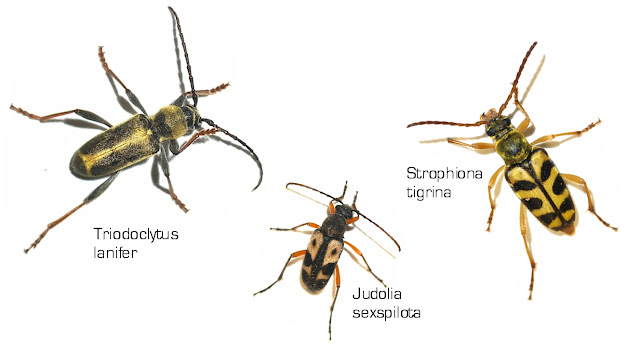 While the rose bushes are probably not the hosts for the wood-boring larvae of the cerambycids, the elusive bright red weevils that led us on a long chase among the rose bushes totally depend on this plant. The female of the Western Rose Curculio lays her eggs into holes that she bites into the rosebud. The larvae then feed on the flower and over-winter in the rose hips, pupate, with the adults emerging the following spring to mate and begin a new cycle. The adults were also happily chewing rose leafs and petals when they were not too busy mating or dodging paparazzi by suddenly dropping out of sight. 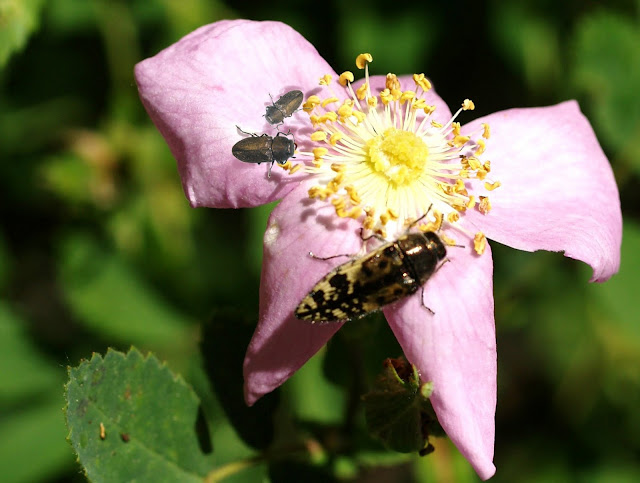 Many thanks to Robyn for sharing this great place with us! We will definitely stop there again on our next California trip.

P.S.
I found that Wikipedia refers to the Agrilus that kills the oaks as A. coxalis, other sources call it A. auroguttata. Here is a paragraph from a paper by Henry Hespenheide et al that Henry sent to clarify this discrepancy:
"Agrilus auroguttatus Schaeffer 1905, Revalidated status (Figs. 34–36)

Only a single specimen is known from the peninsula, beaten from Quercus sp. at the end of August in the Sierra de La Laguna, BCS. Agrilus auroguttatus has been considered a synonym (Hespenheide 1979) and later (Hespenheide and Bellamy 2009) a subspecies of A. coxalis Waterhouse 1889 (Figs. 31–33), but on further study we now con- clude that they are distinct species. Although A. coxalis has been recorded from southern California (Westcott 2005, Coleman and Seybold 2009), this population should be treated as A. auroguttatus; A. coxalis s. str. has been found only in Mexico, Guatemala, and perhaps Honduras. The senior author only recently had males of A. aurogut- tatus available for study, and when genitalia of specimens from the California population were compared with those of A. coxalis from Chiapas, México, consistent differences were observed (cf. Figures 33 and 36). In addition to differences in genitalia, the elytral pubescent spots of A. coxalis are typically smaller (<0.25 mm in width) and very pale yellow or white, whereas those of A. auroguttatus are larger (>0.25 mm in width) and distinctly dark golden orange in the Arizona and California populations, although they are pale in the BCS specimen. The disjunct distributions and consistent genitalic and morphological differences given above all recommend considering A. auroguttatus and A. coxalis as separate species. Until recently, A. auroguttatus had been known only from south- eastern Arizona, and had rarely been collected. Coleman and Seybold (2009) reported A. auroguttatus (as A. coxa- lis) to be causing widespread damage and death to oaks in San Diego Co., California, where, because of its sudden appearance, large numbers, and apparent mortality to its host, it was assumed to have been introduced."
HESPENHEIDE ET AL, AGRILUS OF BAJA CALIFORNIA Zootaxa 2805 © 2011 Magnolia Press · 43
Posted by Margarethe Brummermann at 5:50 PM