Insects at the Gravel Pit in Marana

As stated in the previous blog, the vegetation around the Coachline Gravel Pit is heavily disturbed. Large areas are covered exclusively in Cocklebur (Xanthium sp.), others in Dock or Sorrel (Rumex sp.). Two species of Salt cedar (Tamarix top left) lost some ground during the flooding but are making a rejuvenated come-back. The only Native tree competing successfully is the Mexican Palo Verde (Parkinsonia aculeata top right). Much of the ground cover consists of imported grasses and at least 5 species of Night Shades (among them Ground Cherry, bottom left). Over the last year, Russian Thistle (Salsola bottom right), one of the tumble weeds, has been gaining ground. 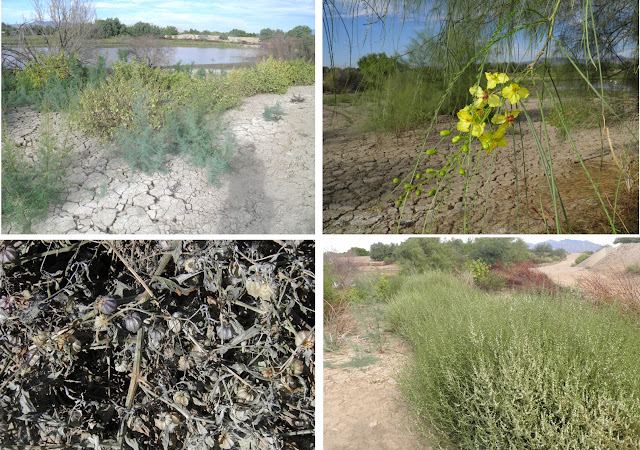 All this is not the best base for a very interesting insect fauna, plus a lot of subterranean eggs and larvae probably succumbed to the widespread flooding. Anyway, I keep checking, hoping for something interesting.
I found a number of flies which, to me, are most difficult to identify. So I will add taxons later, whenever I (or experts) figure them out.

So it wasn't a great photographic haul, but one never knows, and it's only minutes from home..
Posted by Margarethe Brummermann at 11:37 AM