34 species of insects on Desert Broom in 30 minutes, not a stellar day ... 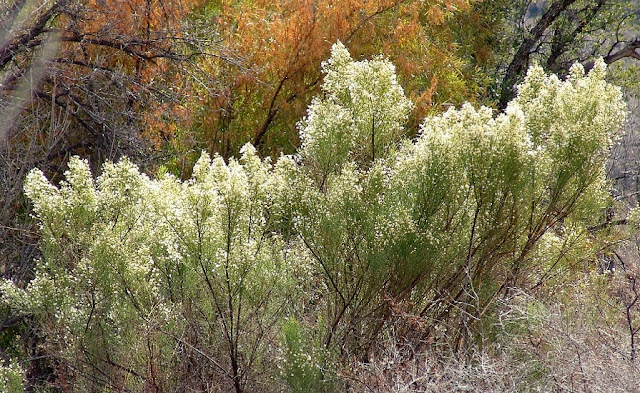 Baccharis sarothroides. Common: desert broom. Family: Asteraceae is native to Sonoran, Chihuahuan and Mojave Deserts. It is a pioneer of disturbed grounds - so it often grows along road sides where the road runoff also provides it with some additional water.

For insects, Desert Broom offers two high seasons per year: In July-August, after heavy monsoon rains, juices raise and seep from the brittle bark - the seeping usually initiated by chewing mouth parts of wasps and beetles or the sucking beaks of Giant Agave bugs.

But in late October, when even here in Arizona most other flowering plants are entering their resting period, the Desert Broom finally blooms.It is a dioecious shrub, meaning the pistillate (female) flowers and the staminate (male) flowers are on separate plants. Female flowers are more elongate and will at maturity release an abundance of feathery fruit. 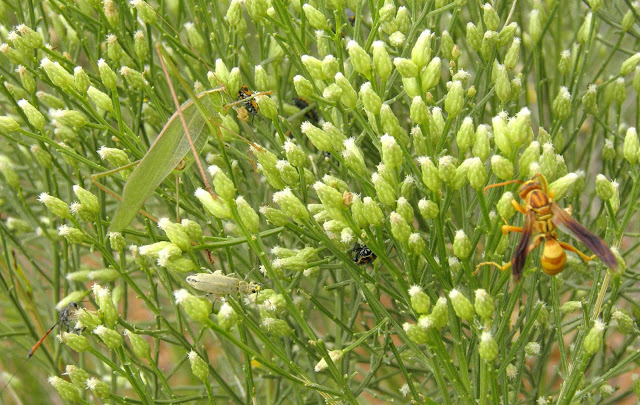 Jillian Cowles writes in our Facebook group SW US Arthropods: 'Yup, the last hurrah for the year. I think of Baccharis as the grand finale of a fireworks show. It is probably a keystone species in the sense that it provides a lot of calories for arthropods at a critical time of the year when very little else is in full swing. This may be directly, such as providing calories for wasps which will need to overwinter, or indirectly, such as crab spiders capturing prey on Baccharis and thereby reaching their reproductive potential. Some folks think that it is a weed! If only they could be reborn as an insect in the next life!' 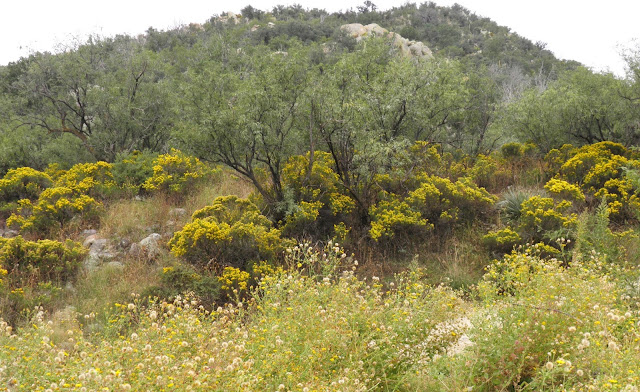 Of course, the 'Hinterland' determines exactly which insects will actually take advantage of the brooms. We have a few in our backyard in the creosote flats west of the Tucson Mountains. They attract their share of bees and wasps, but the number of species is limited by the surrounding habitat. So on October 14, I visited the Brooms in lower Madera  Canyon, a much more divers area comprised of Grassland, Mesquite bosques, slopes with Silverleaf Oak and Alligator Juniper and the Sycamore and Hack berry rich riparian zone along Madera Creek. The brooms were just beginning to bloom, while Turpentine bushes were at the very end of their blooming season. 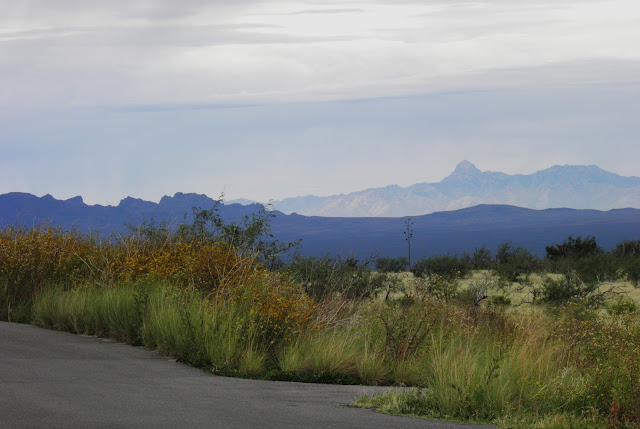 The weather was blustery and cloudy, not ideal for macro photography. So I did not try for beauty shots but for recognizable documentary images and I set myself a time limit of 30 minutes. During this time, I visited a number of brooms around the pay station and between Proctor Rd parking and the road crossing with the creek. Not all images are identified yet, I will add ids as I get them.

Most larger butterflies Like Queens and Ladies where absent due to the blustery cool weather. So the Lepidoptera yield was rather small.


There were a few more beetle species, but noticeably few actual flower visitors. Instead, many of the beetles were still licking sap from the stems like they do in summer. The latest rains, unusual for October may be the reason that the sap flow is still strong. Typical flower visitors are the smaller longhorn and the blister beetle. The Buprestid was obviously on his way to nearby acacia where his species mates were waiting.


Two Chauliognathus species were congregating and mating on the broom flowers. A third species stayed exclusively on Turpentine bushes only a few feet from the brooms.


Many flies of several different families were feeding on nectar, sap, pollen or preyed on other insects.


Hymenoptera were at first mostly represented by Honey bees. As it warmed up, at least four species of paper wasps showed up, representing probably all species that nest around Proctor Rd. The braconid is a brood parasite of the also present Sarcophagidae (Flesh Fly). 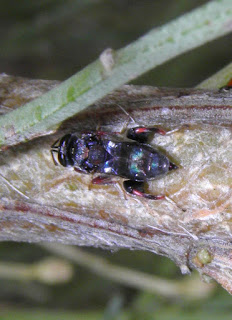 
Hemipterans were very well represented, I had never seen as many Harlequin Bugs together.

So I photographed 34 species in 30 min, which included some walking time between sites, the weather was sub-optimal to say the least, and a number of photo shy critters never got their portrait taken. I addition, I shot a number of spiders that I will introduce in another context.
I have had richer days at the same site, but also much poorer.