A visitor in the pantry

So tonight I had the rare chance to watch the  Antiques Roadshow because Randy, who thinks it's terribly boring, was still working on a paper. Suddenly there was some barking in the kitchen and a strange ongoing sound.  Tascha the cat and three dogs were sticking there noses through the door of the pantry where they are usually not allowed. And still that strange sound. A rattle? A hiss? A snake for sure, and most likely a gopher. Randy got the dogs out of there, I got shoes (just in case), my camera, and my snake hook. But the pantry is not big and full of shelving - it was suddenly very difficult to determine where exactly the sound was coming from.

Then a head appeared, peering around an old unused ceramic jar. It looked just like an ornament on a Chinese vase except that it tried to hide again when it spotted us. It disappeared around a jar of pistachios, slithered  behind some kilos of Randy's humming bird sugar (note to self - couldn't that attract ants?) 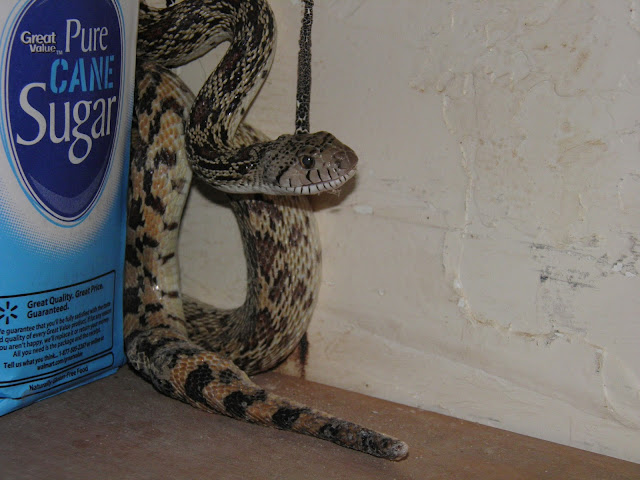 When I finally got a hold of it, it turned out to be an about 4 feet long Gopher or Bull Snake. How did it get inside? Anyway, he's back outside to hunt pack rats now. We are glad to have him.

Posted by Margarethe Brummermann at 10:37 PM