The Hercules Beetles are flying! Even though some 'real' entomologists scoff at my appreciation of these big, shiny, horned giants, I am looking forward to their late-monsoon appearance every summer. One of the serious entomologists contributed the blog title, by the way. Do I smell sarcasm? 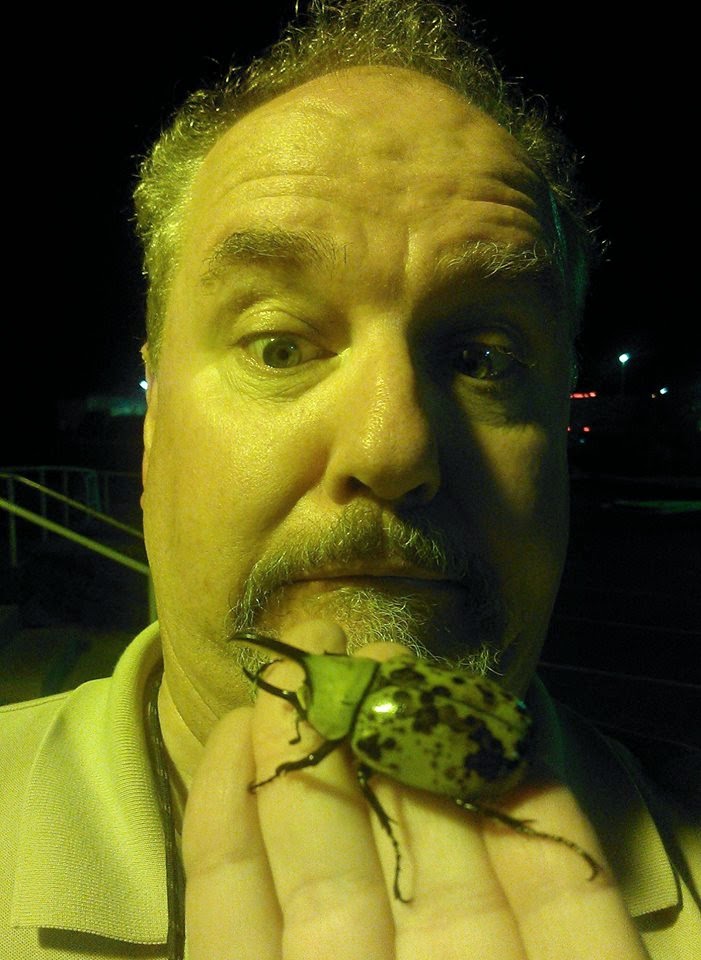 Apparently I am in good company with my appreciation for Dynastes granti. Here Ben Warner documented Bill Warner's August 13th, 2014 encounter with a big guy. Bill is one of our leading scarab specialists, but obviously still impressionable. " My theory of Dynastes being a "degree day" bug is again confirmed--they are out weeks earlier this year (with a warm winter) than last year when we had a long, cool spring."

On my Beetle Safaris with clients, I usually look for Dynastes granti at  artificial light sources with a strong UV component, like those overhead mercury vapor lights of some gas stations along the Mogollon Rim in central Arizona. The further away from civilization and other lights the better. Most of these locations are well known and draw beetle collectors from all over. Even though the competition is usually good-natured and one is at least rarely alone, it is not always pleasant to spend the night at a gas station in the middle of nowhere. But if the weather is right, a warm night after a storm is ideal, the beetle hunt in those locations is usually rather successful.

The scarab-tribe of Dynastini is mainly night active. Most species are big and muscular enough to shiver efficiently and warm up to operating temperature even when it's cool outside, and once warm, they are strong fliers. So at night they fly to their ash trees, prepare their sap licking sites, congregate and find mating partners.The males use their horns to grab rivals and toss them off the tree. I assume the winner gets the girl...but I have seen males push females off the food, too, so fermenting tree  juice may be even better than sex. Here is a report about a study investigating the evolution of the horns in relation to the fighting styles of several species of related Rhinoceros Beetles. 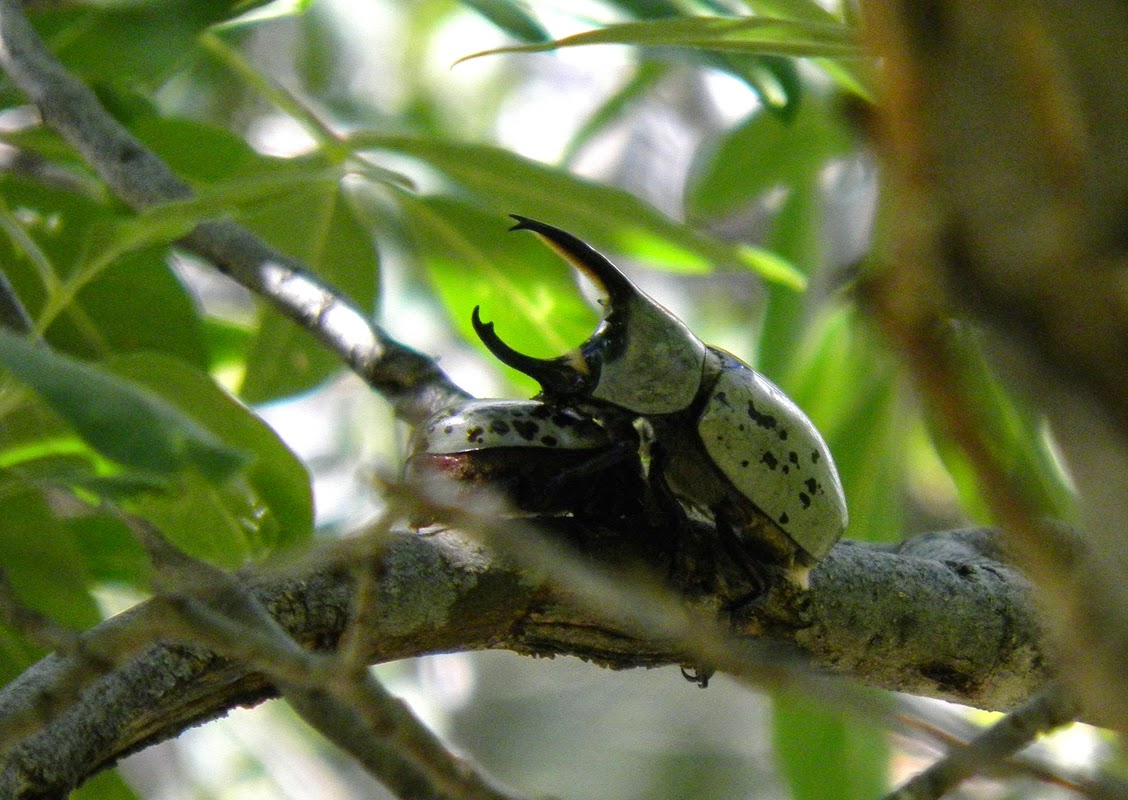 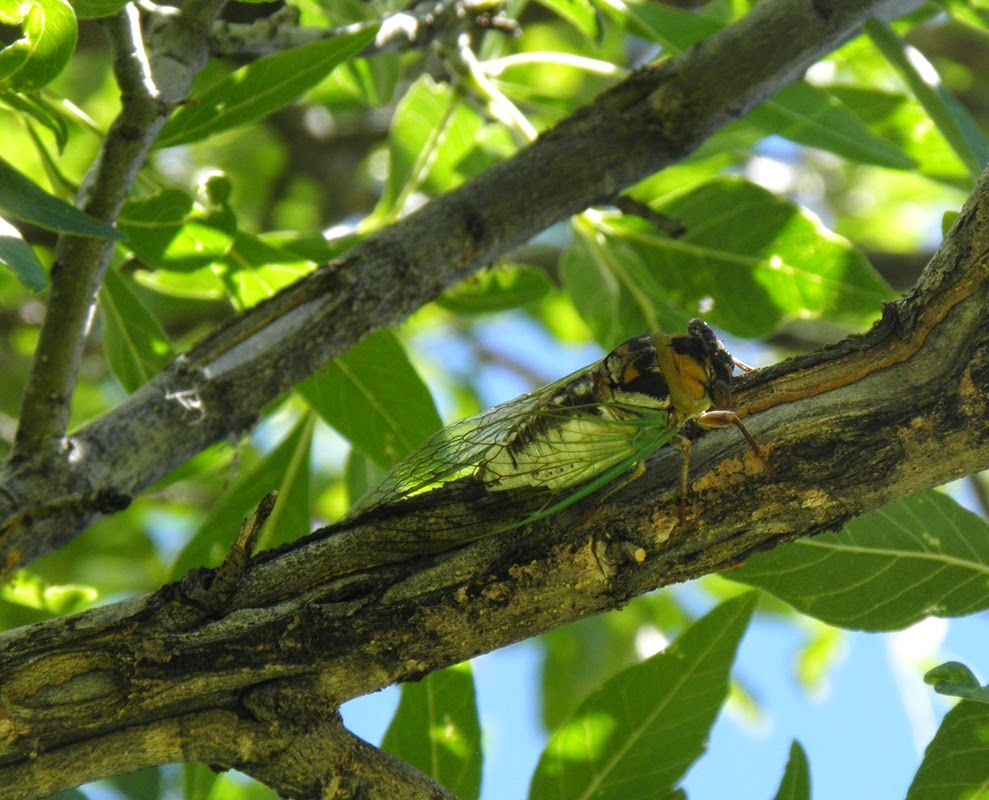 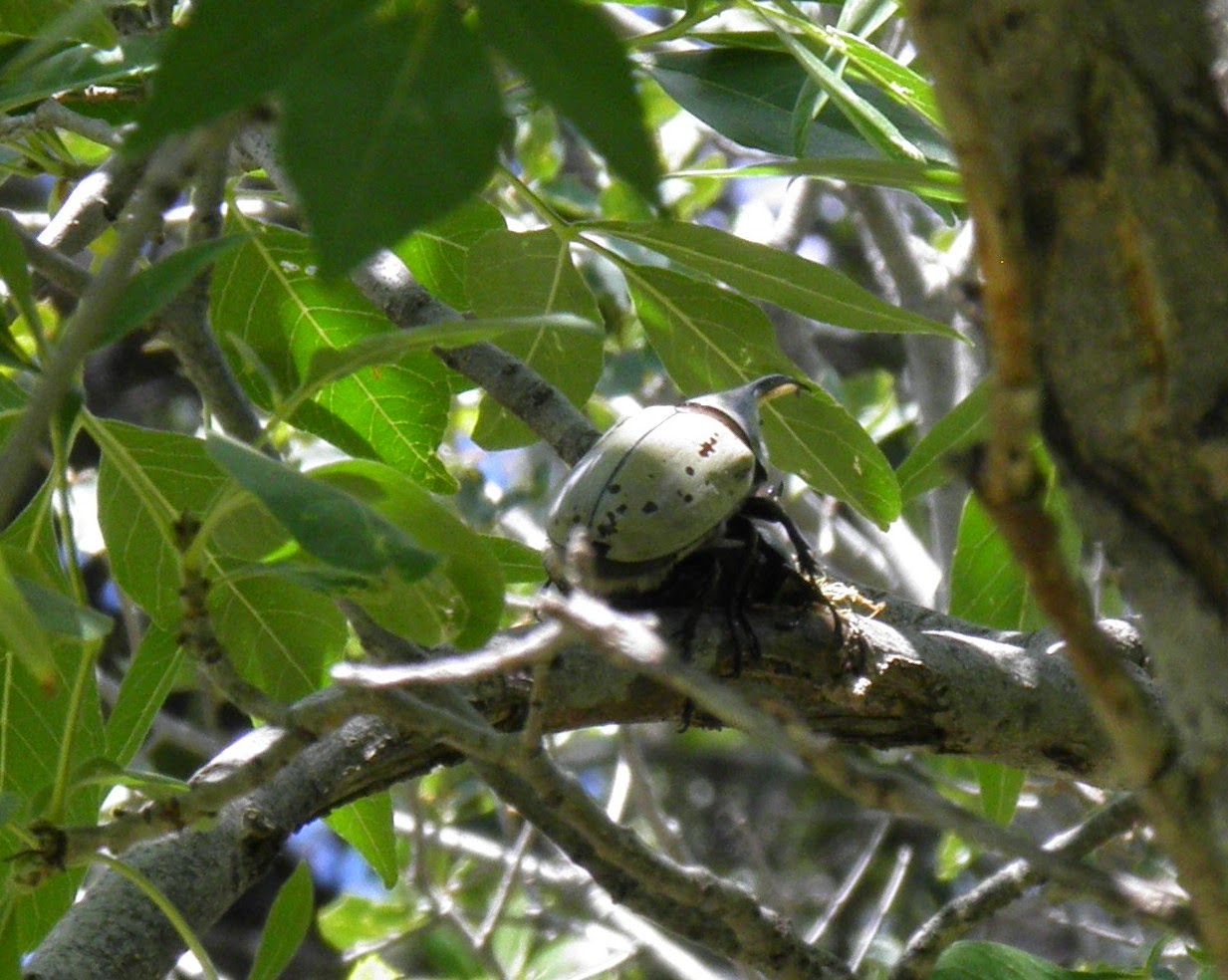 
During the following night I collected a few more beetles at a gas station so I went home with an even number of males and females.

Dynastes love bananas. The males even do a little fighting over them. The females are all buried in the peat moss. 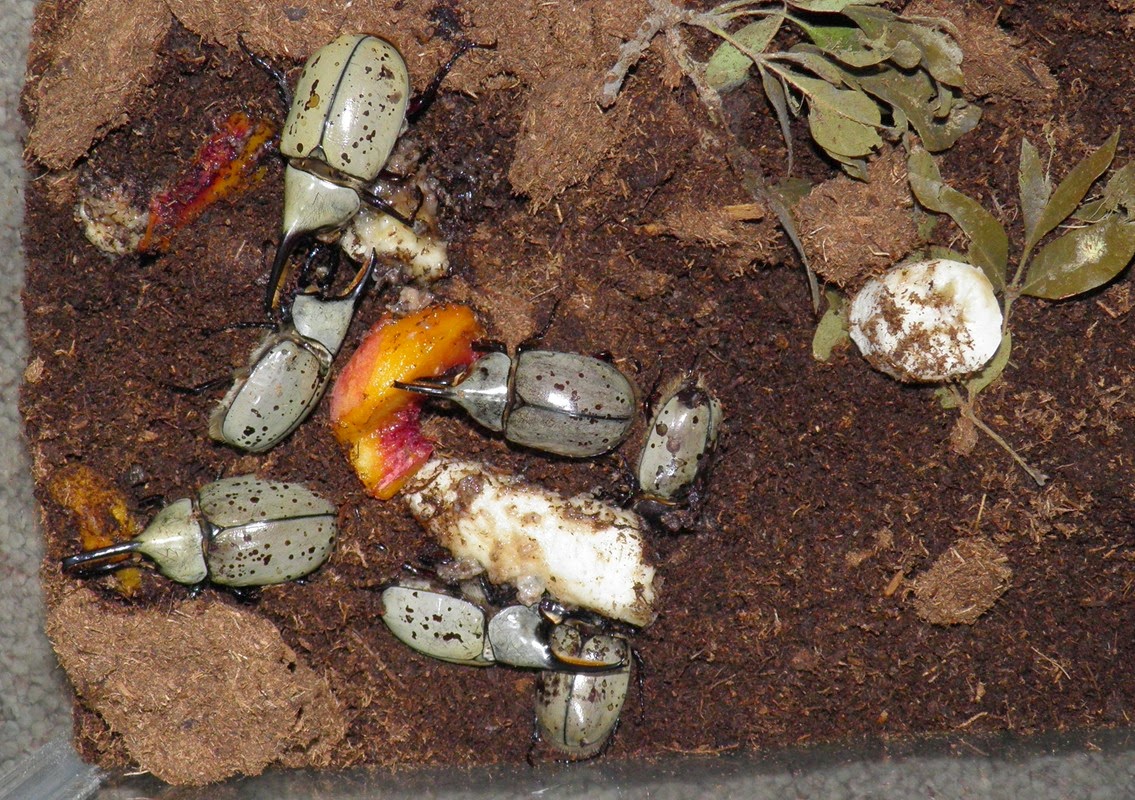 The beetles will augment my own breeding stock, and a few are going to other breeders. A Montessori teacher is building a school project around a pair, the insect photographer Alex Surcica ordered some as models, others will go to entomology classes, an insect festival and a museum exhibit. With some luck, they can outlive their wild brethren by any number of months.
It turns out that I did not get quite enough specimens this year.

But that's okay. Last year I kept eight females who produced eggs from September until the end of November. The eggs then rested until January when most of them turned into little c-shaped larvae. They began feasting on fermented hard-wood mulch (my own month-long preparation) and grew quickly into very substantial grubs. They are still eating and growing now, a year after the eggs were laid. For Dynastes granti, the cycle from egg, to larvae (3 instars), to pupae, and finally adult beetles can take up to 4 years. At the Arizona Sonoran Desert Museum a batch took only 1 year, but the resulting beetles were tiny and unsatisfying.


According to anecdotal evidence, temperatures and the availability of protein in the larval food have an impact on the length of the development time and the size of the adult specimens. But how those factors are correlated is impossible to tell without rigorously controlled experiments.

About the first photo: it's photoshopped. I was inspired by a flickr picture of a big dung beetle from Africa taken with ultra wide-angle at night in front of a gas station. So I planned on following that idea. But the situation at the Arizona gas station was so frustrating (see above) that I completely forgot about it that night. So I decided to reconstruct the scene in a photo editing program. The photo shows  very much what you'd see lying on your belly at the gas station in a mix of cigarette buds and tire-rub-off/oil slime. Except that some one would have quickly stolen the bug from in front of your lens.
Posted by Margarethe Brummermann at 6:56 PM