September 20: I spent the night after my presentation for the Master Naturalists of Cochise County at Pat and Lisa's place right next to the Ramsey Canyon B and B and the Nature Conservancy. The road towards those two properties was flooded and probably washed out. 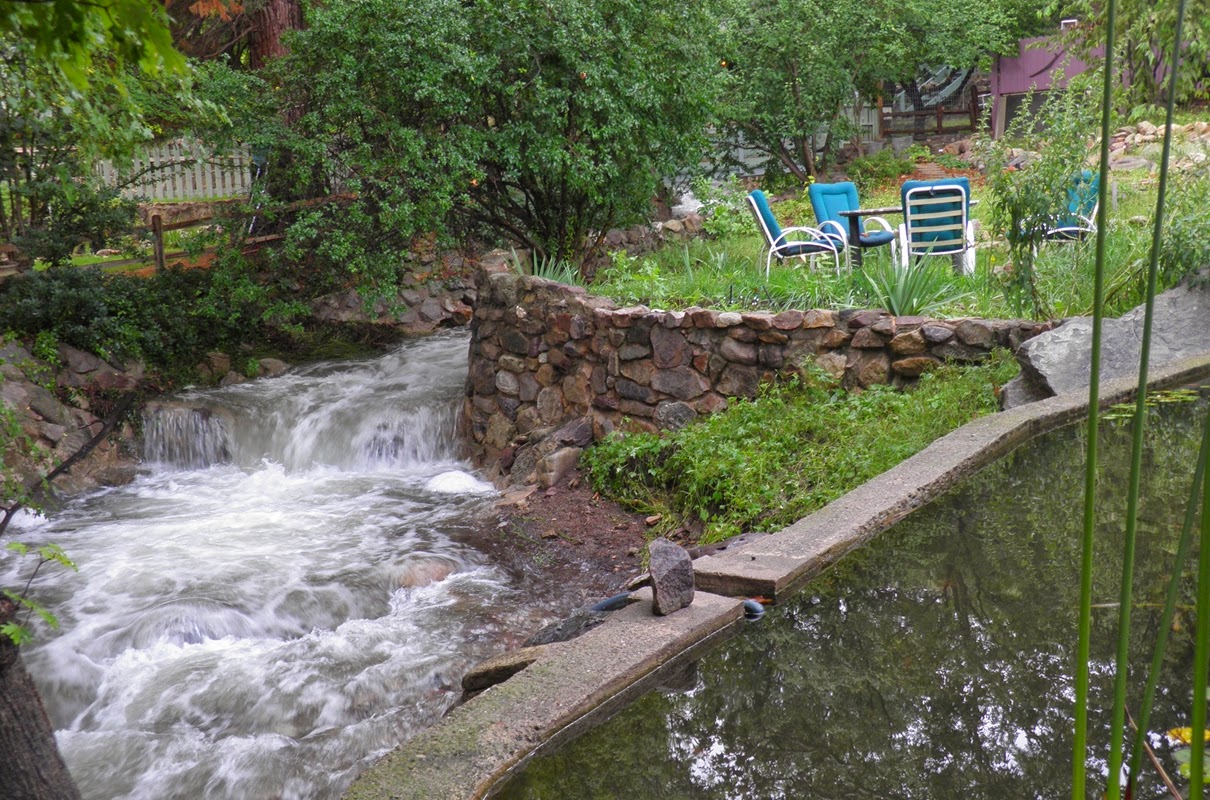 Sierra Vista and Hereford got more than their share of rain, not just from Hurricane Odile but all summer long. The creek that seems to wash directly along the foundations of Pat's house was powerful and noisy but actually very well retained by an old wall made of cement and local rock.
During my visits I like to sleep outside in my vehicle to be closer to nature, but Pat showed me the wrought iron bird-feeder stand that their local bear had just bent over to reach some suet. The thing was not very high to begin with - so did he just pull it over it for a more convenient position while snacking? He must be brutally strong. So I slept indoors this time. 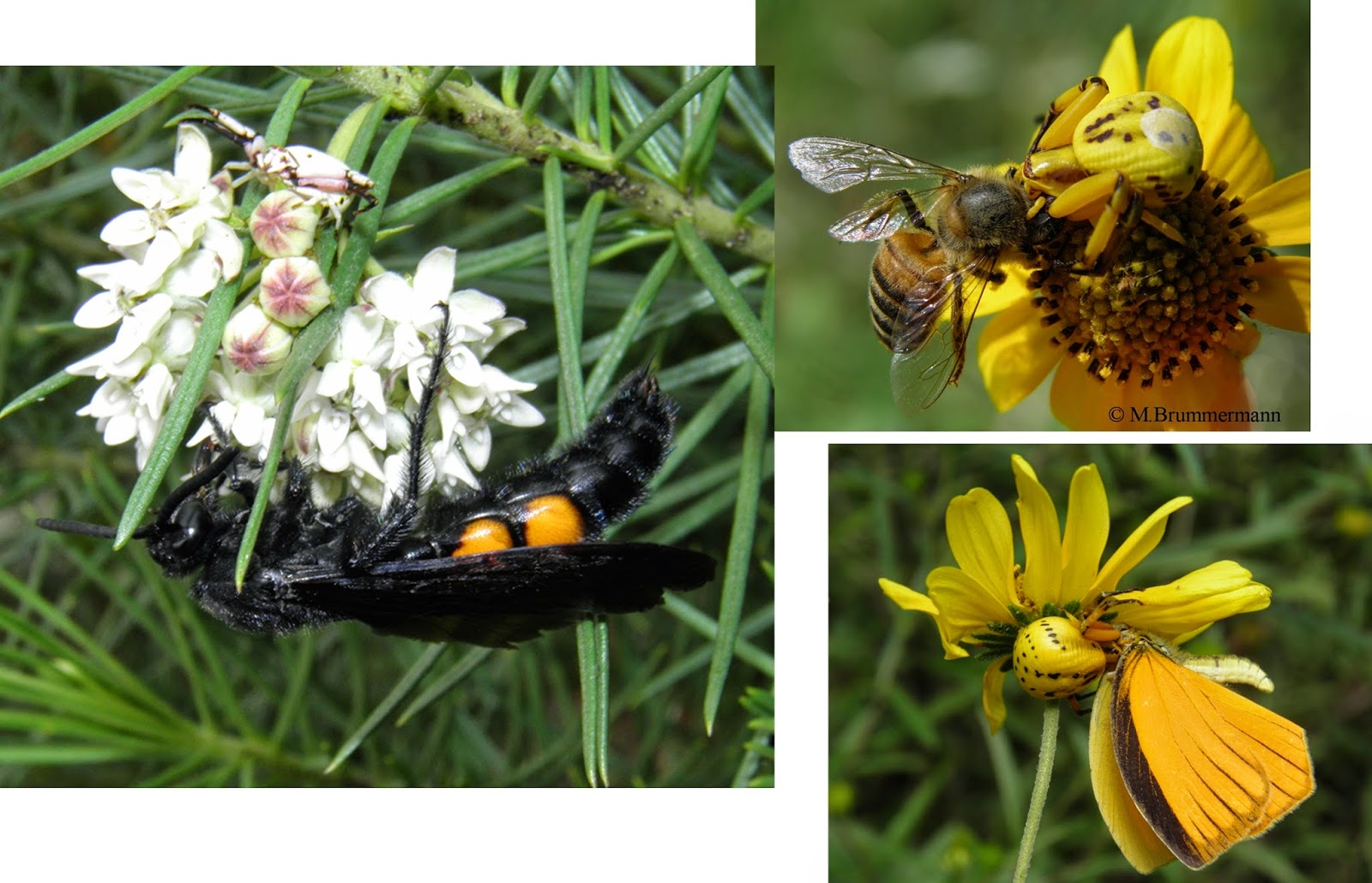 The night was cool and the morning overcast. Insect-life started slowly, but than with a bang: a male of the huge scoliid wasp that has wandered north from Mexico about five years ago visited Pat's milkweed. They are usually too active to get good photos, but this time I got even a video.
There is a whitish crab spider in the background. It fits very well with the white milkweed. It's yellow 'species mates' were ambushing prey on yellow asteraceae, usually so camouflaged that only the death pose of their prey gives them away. So do they develop their own color in accordance with the flower they live on? Do they chose a flower in accordance with their own color? Can they change color reflexively?

One composite disk held another surprise: the behind of a scarab beetle was protruding from it while the beetle's head was buried deeply among the florets, where the nectar flows. It's the typical position of Euphoria     .


The place was crawling with caterpillars. Pat's tomatoes were completely defoliated by Manducas that had already dug into the soil to pupate. But I found a large caterpillar of Lintneria istar (Istar Sphinx another sphingid. Pat's  Pipevine (not the endemic species) stood untouched, but his dill plant was adorned with a very pretty young instar of a Black Swallowtail. Pat's garden has pretty flowers and decorative plants, but most are basically insect bait. He was just planting Ground Cherry plants to maybe entice the red cousin of the Potato Beetle to move in.

Brickelia grows all over, and the caterpillars on a plant right by the bridge over the fish pond promise to turn into the startlingly beautiful Tiger Moth Dysschema howardi (Northern Giant Flag Moth) .

A cactus weevil Cactophagus spinolae  was strolling among the rocks. Pat gladly let me collect that one. We all know how he can mess up a cactus with those biting mouth parts at the tip of the long snout, and Pat has also seen twice that these big weevils attack and kill those slow lumbering mantis females. Who would have thought that?

On the metal-grid walkway over that fish pond I was surprised to meet the Black-necked Garter Snake again that I had seen hiding under an Opuntia pad earlier. He was carefully choosing his diving spot to join the gold fish in the water.

An area adjacent to juniper oak forest is covered in natural vegetation. Adult Tortois Leaf Beetles were pressing themselves against the Datura leaves so that the pigmentless outer parts of their elytra and  pronotum would prevent any cast shadow that might betray them. Instead their presence was announced by the shotgun pattern of holes in the leaves that they probably produced as larvae.

Sweet smelling Horse-mint flowers attracted day-flying noctuid moths, a brightly colored Sonoran Bumblebee and another visitor that was flying with long, dangling hind legs: Systropus arizonicus reminding somewhat of a Polistes Wasp. It is a bee fly of rather unusual body-shape.

Systropus arizonicus is a brood parasite of caterpillars of Limacodidae ... I wonder how it gets its eggs into those caterpillars and if the long legs have anything to do with that? They seemed of little use for nectaring... Here is a limacodid moth Monoleuca obliqua and its fantastic slug caterpillar, both from Ramsey Canyon.

I could have spent days in this garden paradise except that the next shower was already rolling in. The garden was also full of interesting mushrooms. They are going to grow huge this year! 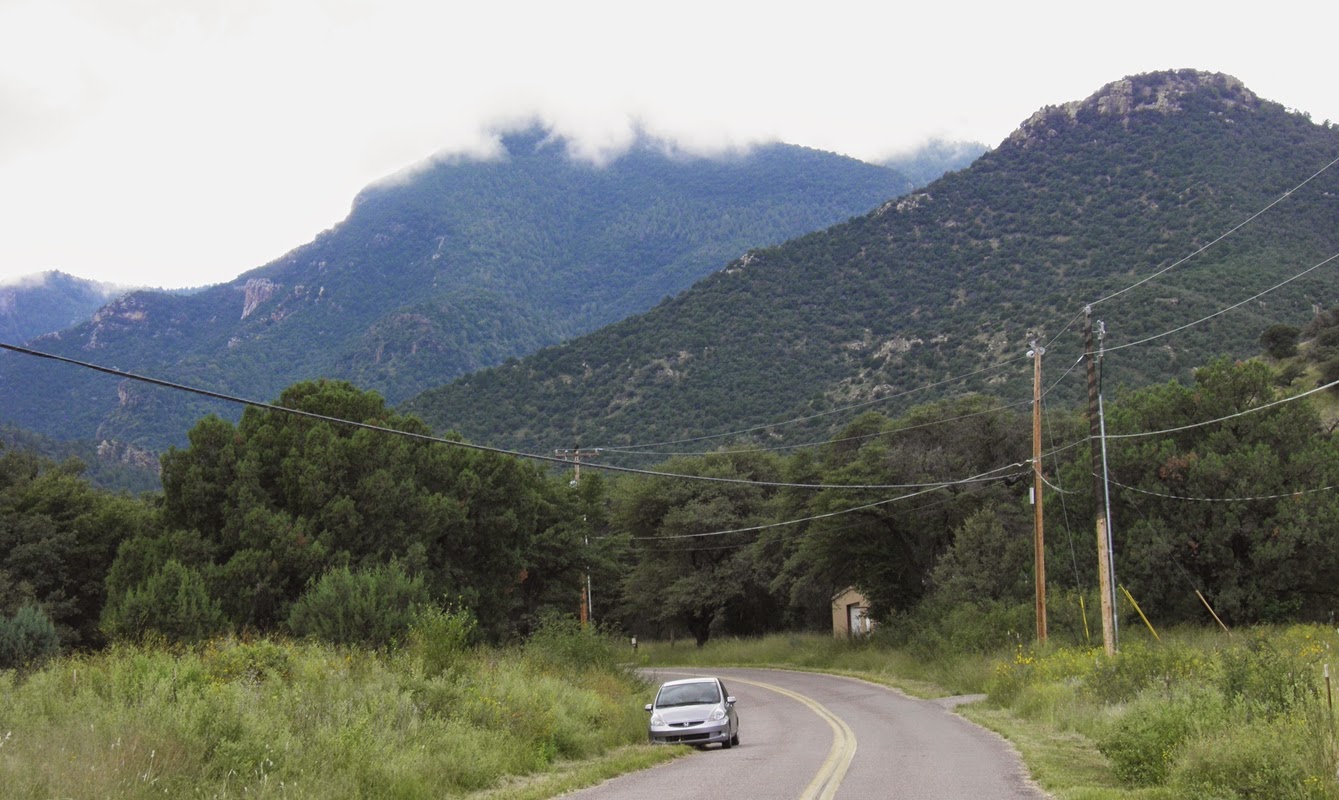 Posted by Margarethe Brummermann at 11:53 AM