Over the last 6 years I have photographed literally thousands of Arizona beetle species with the goal of building an inventory for a field guide ...a locally specialized book for which it is very difficult to find a publisher (suggestions welcome). I still believe that photos of living beetles on a white background are the best choice for a field guide because they show the true colors, natural posture, and details more clearly than shots with more natural backgrounds.

I am working with a pretty minimal setup, so I can shoot in the field or in someone's crowded bug room. I use the built-in flash of my Olympus E-500 SLR. I orient it to hit the head of the beetle and use a small LED flashlight to brighten the hind end where the flash doesn't reach. 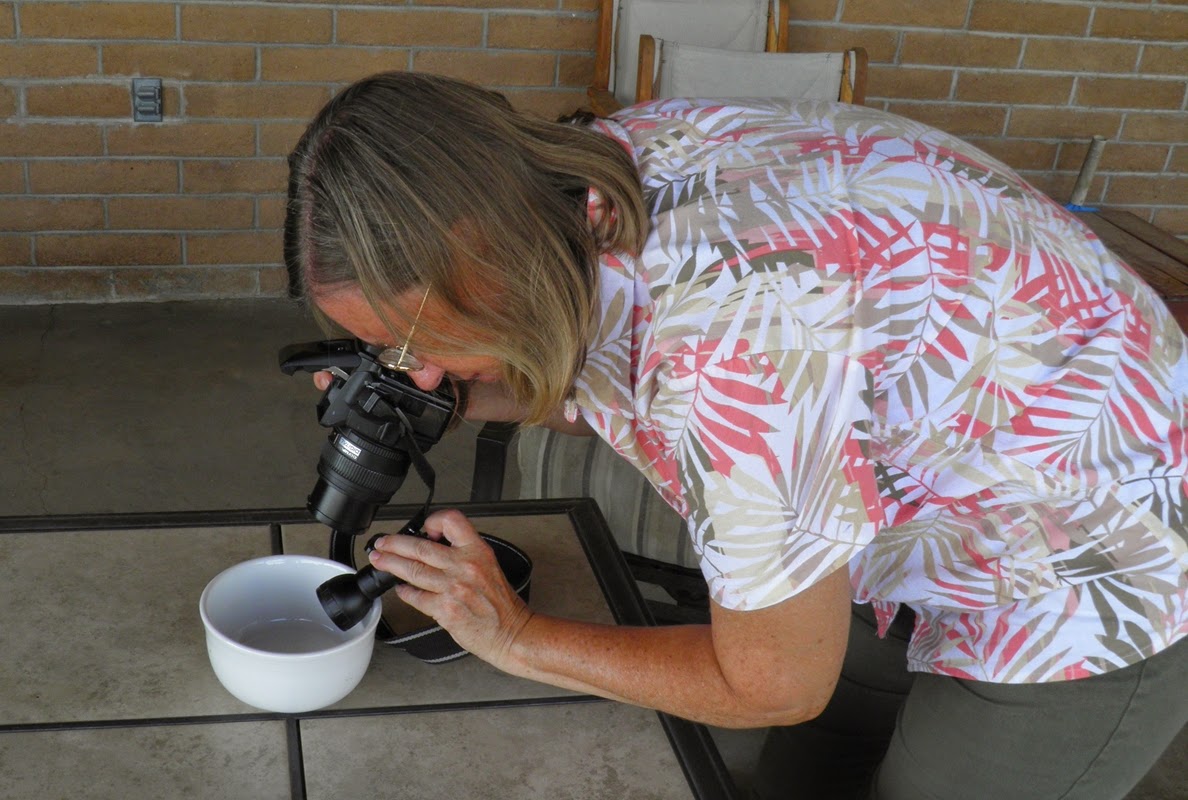 I place the beetle in a rounded, smooth, white ceramic bowl. The smooth surface keeps many beetles from getting too much traction, so they stay in place. More important, the rounded walls bounce back the flash, reducing hard cast shadows to just the amount that still supports the impression of three-dimensionality. I later process the images using manual stacking and clean up the back ground.


Here is a photo of Piotr Naskrecki by Alex Wild - two absolute masters in the field, and check out Piotr's free-hand set-up!
Of course I very much admire the photos that my friends take with better cameras and elaborate multi-source flash set-ups. As many insects are quite shiny, inventive contraptions are used diffusing the flash arrays to prevent irritating reflections. And there is still the problem of cast shadows directly under the insects while maintaining enough shadow to keep the result natural-looking.

My new friend Bernard from Belgium had obviously invested in the best lenses and computer controlled flash systems. He was carrying the whole load of equipment on his trip through the western US. But he mostly impressed me with a technique that required in the end more patience and understanding of beetle behavior than costly equipment. I loved the results he (and then I, too) achieved.

I have to interject here that he specializes mainly in carabids, Ground Beetles, including the charismatic Tiger Beetles. From my childhood in Germany on, I shared this appreciation for carabids, my all-time favorite being Carabus auronitens of our Westfalian oak forests. Ground Beetles, which are called Laufkäfer in German and loopkevers in Dutch, are speedy predators that can run very fast. But they also often freeze in mid-motion and sit still for minutes. They are the perfect models for Bernard's approach.

He liked the cloudy sky of that morning in late July, but he also had a white umbrella ready to shade our little makeshift terrarium. Thus harsh light conditions were avoided and the beetles were much happier. They would otherwise try to hide. 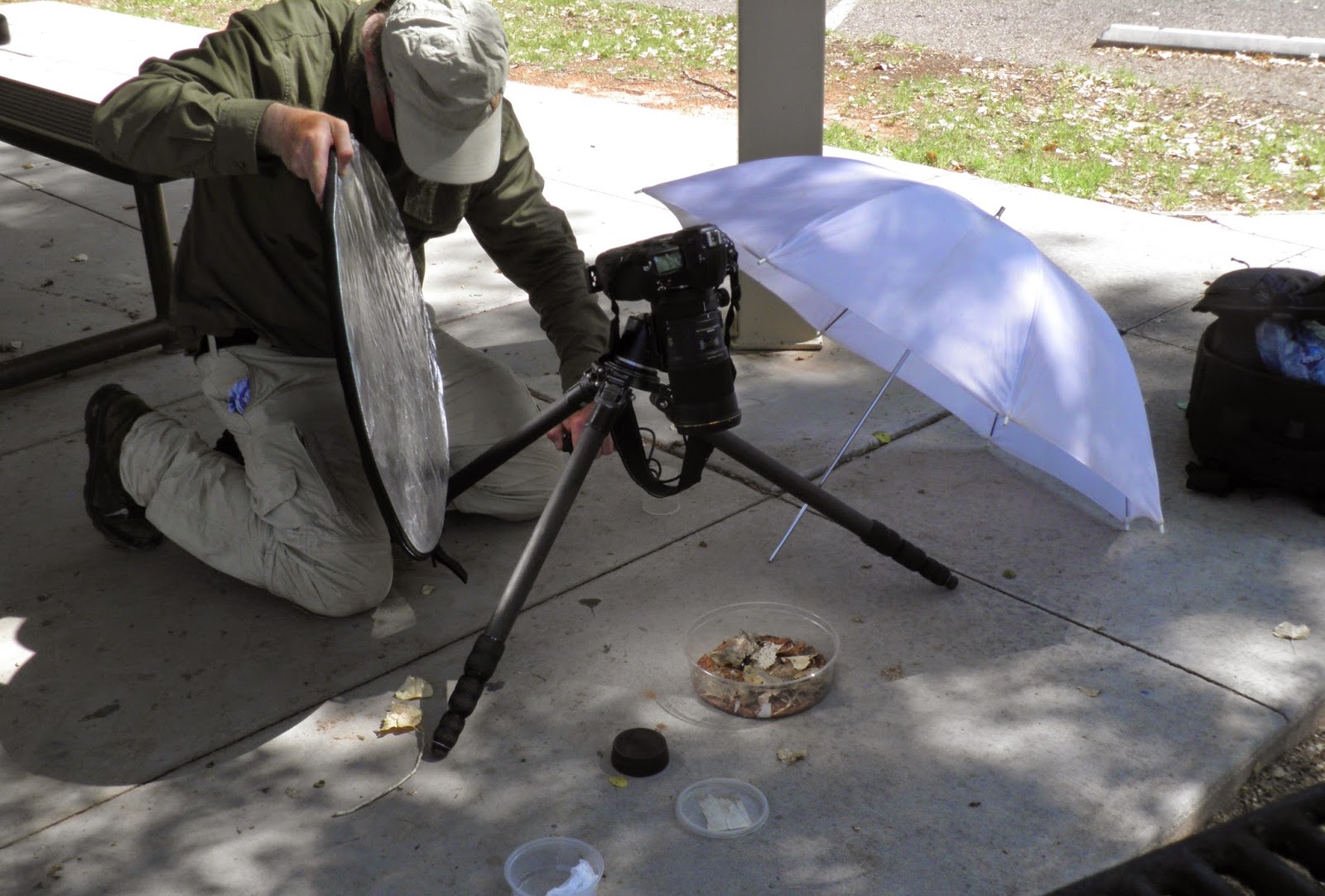 A small reflector screen (foldable like windshield shades) was used to bounce in just the right amount of additional light. His hands were free to do this because his camera was on a low tripod and he remote-controlled the shutter.

The beetles cooperated nicely. The explored the 'natural' ground cover in the little makeshift terrarium (a flat clear cookie box)  and stopped to drink a few drops of water. They posed with their antennae held high and their legs in natural positions. Most of all, their colors and subtle textures were unaltered by flashes or diffusors.

When I got into the action, I found that my small point-and-shoot Olympus SP-800UZ might outperform my SLR with its 50 mm macro lens. This particular point-and-shoot has a super-macro setting in which the lens is extended to a fixed 55 mm, so it does not require to get as close to the subject as most other cameras with wider angles. With the typical sensor to lens relation of a point-and-shoot camera, it offers better light sensitivity and depth of field than my SLR does.

I used no tripod or remote shutter control, but I made sure to firmly brace my hands against the rim of the terrarium.When photographing an insect on a twig, I held the twig in one hand and the camera in the other, then braced my hands firmly against each other. So any motion that could not be avoided was the same for camera AND subject. That's RELATIVELY easy (thank you, Professor Einstein!).

I loved the results, even if there were a number of blurred shots. I avoided 'upping' the sensitivity (ISO not over 250) because higher ISO causes a lot of grain in my images (newer cameras are much better about this). I also kept the aperture rather small (never under 5.6) to keep the depth of field high. Luckily, overriding the camera's set programs is possible but not always necessary.

Even though I do not yet have my own reflector screen, I have been experimenting with the beetles that I collected on my last trips to Pena Blanca and Ramsey Canyon. The Clerid and the longhorn beetles were photographed in my painting studio close to a north facing window.


Sometimes, natural light can even be too diffuse as I discovered when I posed a cactus longhorn on a prickly pear very late in the afternoon. With now shadow to ground it, it seems to float.


Posted by Margarethe Brummermann at 5:51 PM