A change in public perception: Killer Bees or threatened pollinators

Wikipedia says it quite correctly: "A new honey bee colony is formed when the queen bee leaves the colony with a large group of worker bees, a process called swarming. In the prime swarm, about 60% of the worker bees leave the original hive location with the old queen. This swarm can contain thousands to tens of thousands of bees. Swarming is mainly a spring phenomenon, usually within a two- or three-week period depending on the locale, but occasional swarms can happen throughout the producing season."

So 'Italian' Honey Bees are supposed to do this in spring, and not too often. But our Arizonan Africanized colonies seem to  break up more frequently, and you see small swarms at all times of the year. Big colonies are important for effective communal thermoregulation in winter. The Italian bees, supported by their keepers, usually survive very low temperatures by shivering and huddling. The African Bees are not that cold tolerant - so the cold winters in Germany and the northern US  kill them off, but in Arizona they often survive, even in feral hives. By now all feral hives in Arizona are assumed to be Africanized.
Accordingly, here in Picture Rocks  our feral bee populations were greatly reduced after the very cold winter of 2012/13. In spring of 2013, we saw very few honey bees at hummingbird feeders and bird baths (we don't have any closeby bee keepers). But all through  2014 I again saw swarms searching for homes, Saguaro holes turned into bee hives, and bees visiting  hummingbird feeders. The (probably Africanized)  honey bee population of Picture Rocks Arizona is bouncing back just fine.
Local endemic bees beware, they are going to be strong competition again.

In the past, swarming bees alarmed the public. Africanized Bees were seen as a deadly menace. With some justification. If those bees try to defend their hive, be careful. By hive I mean an established colony that has honeycombs and, most importantly, eggs and larvae to defend. They may attack if you get close and or do disturbing things ... like hammering or mowing lawns.
If you run they will follow, but not very far. A few stings are what you will suffer before you have outrun them. But deaths have occurred when people stood their ground and swatted at them or were unable to get away. The sad case of a rock climber who died hanging in his harness speaks for itself.

But when swarms are encountered out in the open before they find a new home and become territorial, there is no threat to the observer. The queen lands on a branch, all others follow, held together by her pleasant smell. A big obvious cluster of bees hangs in a tree. Scouts will be sent out, looking for a nice hole that might be the new homestead. You can only hope that they do not chose the rafters of your house.  But the big, scary clump of bees in the tree is harmless. The stomachs of these travelers are full of provisions for the journey, and they are lazy and docile, Africanized or not. No need to run from a swarm like that. The worst that can happen: the queen lands in your beard. Then you may end up covered in bees. But not stung.

Over the last years, the mass media has been talking about the demise of pollinators and, in that context, hyped up the buzz-word 'beehive collapse'. To the ecologist these are two different phenomena. Endemic pollinator populations are definitely suffering all over the world. Important roles are played by drought and climate change, intensified agriculture, monocultures, pesticides, weed control along roads and between fields that eliminates the bees' food and kill them directly.  Equally detrimental: development, and even overly groomed gardens where mulch and plastic foil cover breeding grounds, and dead wood and plant material needed for breeding are cleaned away. It makes reproduction impossible and no pretty 'bee hotels' can make up for the loss of natural breeding places.

As for the honey bee hive collapse, it is a number of factors acting together. Mites and neonicotines certainly play their roles. So does insufficient winter food, after too much honey is removed and replaced with poor substitutes. But industrialized beekeeping and agriculture pose a problem that is more difficult to pin down. Millions of bees are shipped all over the continent, shuttling constantly between almond orchards in California, rape fields (Canola) in the north, and wherever else big monocultures demand pollinators in unnatural numbers. Thus infectious germs are distributed in a modern, borderless fashion.

Stress weakens immune systems, not just in humans. Researchers in Norway, for example, have clearly demonstrated the negative impact of transport stress on the survival rates of smalt (young salmon) that were shipped from breeding facilities to aquaculture farms. Those smalts

As press releases about the sad fate of pollinators are reaching the public,  the trend here in AZ has slowly changed from concern about dangerous killer bees to concerns about the well being of our Honey Bees. Again, as a biologist I'd say that the imported honey bees and the invasive feral bees (same thing but escaped from the care of the bee keepers) are by far not as important as our less visible endemic bees. But any kind of public concern about the well-being of mere insects should probably be applauded.

Lately I have seen a number of Facebook entries that described honey bees that were inexplicably dying. The presumed culprits ranged from poisonous nectar of blooming Tamarisk (invasive and bad in many ways, but not killing honey bees who actually originated in the same area as the tamarisk), to  neighbors spraying insecticides to Carpenter Bees attacking the hive, killing the inhabitants and stealing the honey..

The last assumption reminded me of a famous Germa children story (Die Biene Maja by Waldemar Bonsels) describing a raid of  Hornets  (Vespa crabro) on a bee hive - they catch the honey bees, masticate them into food for young hornets, and they steal the honey. This terrible story kept me awake at night, but it is credible. Wasps and hornets are predators, and stored honey and pollen does get stolen, not only by marauding wasps but by other bees, beetles, birds, bears and men.

But Carpenter Bees killing large numbers of honey bees during a raid on a hive?  The above picture came with the story: the assumed culprit, a very large bee, impaled on a huge pin. The photographer had observed  big bees approaching the hive, a tussle, and later dead bees on the ground. He collected the evidence and came to his conclusion, probably because  Eastern Carpenter Bees  look not unlike big honey bees.

To me, the photo tells a different story: On the pin is a dead male honey bee, a drone.
While most of the inhabitants of a bee hive are females and sisters, all daughters of the mother queen, at certain times a number of males hatch from the brood cells. They have only one purpose: they will mate with new queen bees that are also emerging at that time. Young queens and drones go one bridal flights to mate, and the new queens will store sperm from this one mating to produce hundreds of offspring. So the role of the males is over after that one romantic adventure. Since they have nothing else to contribute to the well-being of the hive, the workers will not feed them. They will actually not let them back into the hive. Scuffles may happen when the gate keeper bees refuse entrance to the returning drones. Observers may think an attack is going on. No. It's just the expulsion of the useless drones. But dead bees can be found at that time. At the hive entrance, but also under a tamarisk tree close by. Look into their eyes. Those are the expired drones. 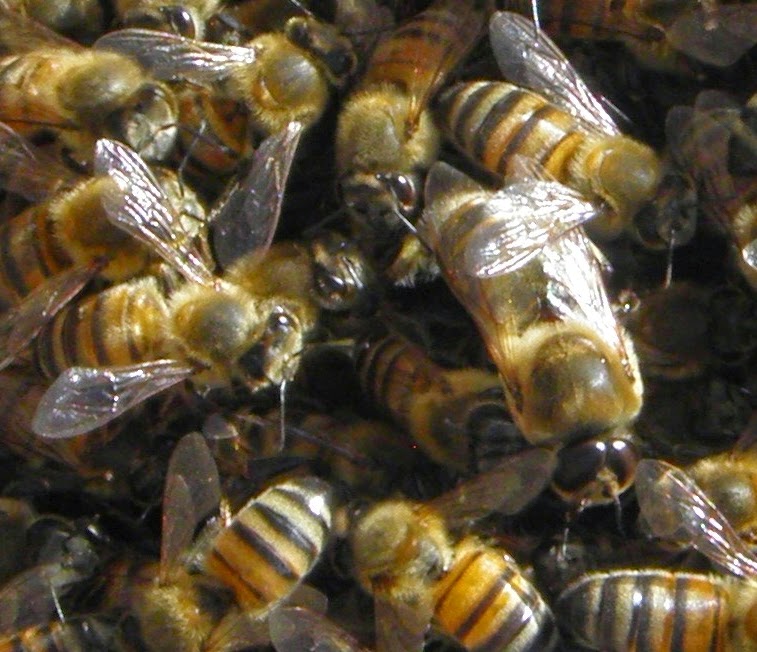 Here is a close-up of the swarm above. You can see the huge drone on the right. His eyes are big and touch on top of his head: he will be able to not just smell his beloved but see her in his aerial pursuit. Check out the smaller worker bee on the left with widely spaced eyes.

Posted by Margarethe Brummermann at 2:21 PM